'I'm taking responsibility for the status of ERCOT': Gov. Abbott says reform, getting aid to the state is top priority

"We will not stop until normalcy is restored to your lives," said Gov. Greg Abbott Thursday during an update from state officials. 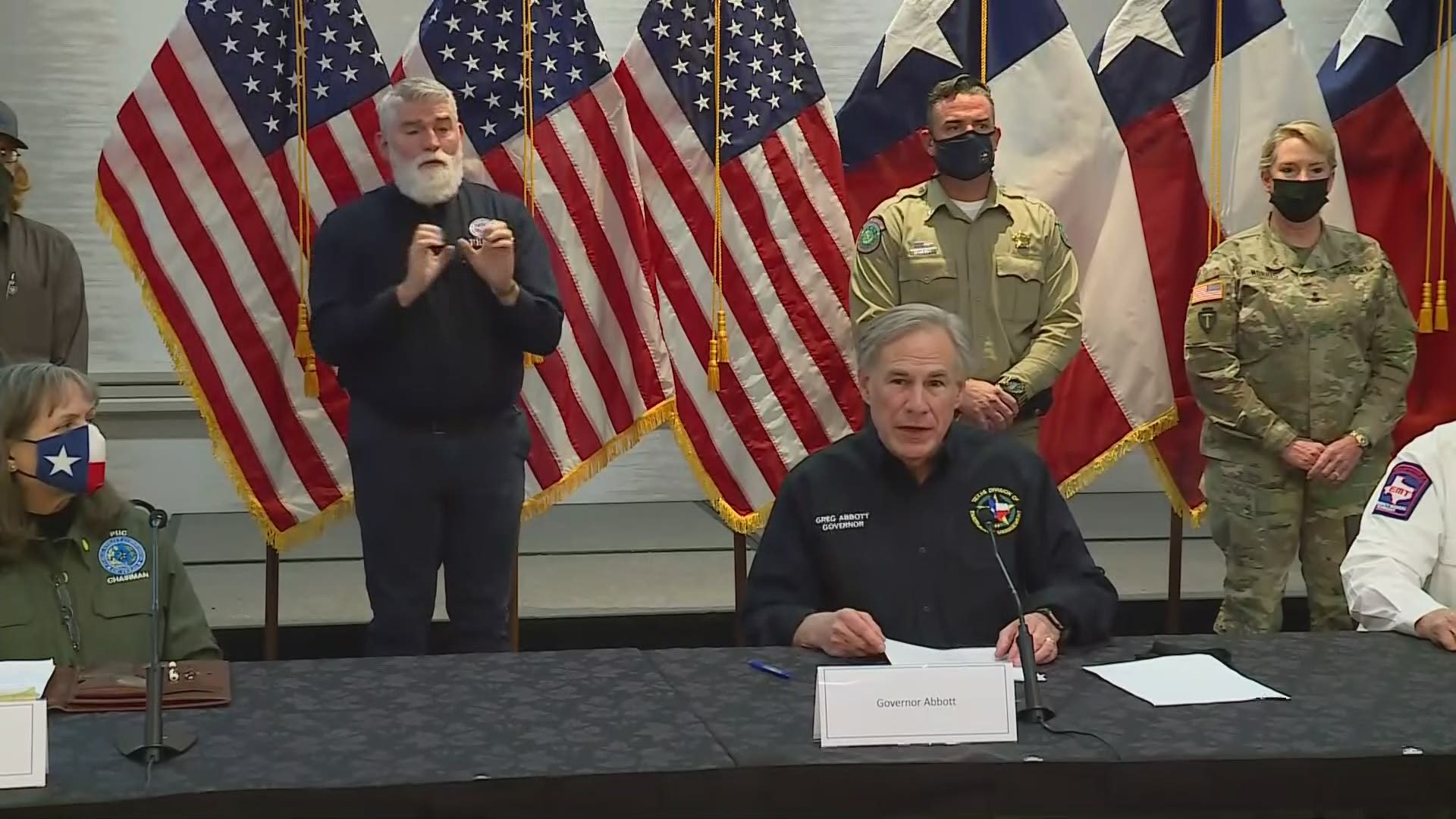 AUSTIN, Texas — As power is restored and Texans continue to grapple with water issues, Governor Greg Abbott ensured that reform is a top priority for the state.

During a news conference Thursday afternoon, Gov. Abbott said that power had been restored to nearly two million households and that the 325,000 households without power aren't due to generation issues.

Instead, he said, the remaining power outages are due to downed lines, or needed to be manually connected. Gov. Abbott said that every available repair truck has been dispatched to help with the remaining outages.

He said Texas agencies will continue to work with local leaders until power is restored to every single location across the state.

Gov. Abbott then introduced five priority tasks his office is working on:

Gov. Abbott remained adamant that what happened with the power outages was completely unacceptable and that ERCOT failed the state of Texas.

Abbott said five days before the winter storm ERCOT claimed they were ready, issued a notice to power plants to make sure they were winterized properly and ensured the public that there was enough power to meet the demand.

"They failed on each measure," said Abbott.

Tuesday, Abbott declared ERCOT reform an emergency item for this legislative session. And in the today's new conference said that he was adding more emergency items, including a mandate of the winterization of power and more funding.

"We will not stop until normalcy is restored to your lives," said Abbott.

But following a question on his personal response to the winter storm and how the state was unprepared, Abbott said "I'm taking responsibility for the status of ERCOT."

And after learning about how new board members were chosen out of state, he said he planned to restructure the board and how it works to help ensure that they respond to Texans more effectively.

When asked about what he would say to people who are in freezing homes, Abbott responded, "As human being I say the challenges they [Texans] are dealing with are truly human struggles that they shouldn’t have to face... As your governor, I want to ensure this never happens again."

Lastly, Abbott was asked to address the backlash over Sen. Ted Cruz traveling to Mexico.

"We've been working all night since we talked to you guys. I don't keep track of people's vacation plans," responded Abbott.

Chief of Emergency Management Nim Kidd said his office is working with local and private partners and FEMA to provide Texans with emergency drinking water.

Residents who have running water are asked to conserve.

One of the biggest challenges will be to restore industrial water to institutions like churches and hospitals, Kidd said. But generators have been requested.

Kidd also said there are currently 331 warming centers open and FEMA will help provide hot and ready meals. If you are able to grocery, you're asked to not "hoard" food.

Kidd ensured food and water efforts are continuous and we'll "get through this together."