A Georgetown family is being sued by their neighbor for their playscape, citing it was not approved by their HOA. A Facebook post by the family disputes the claim. 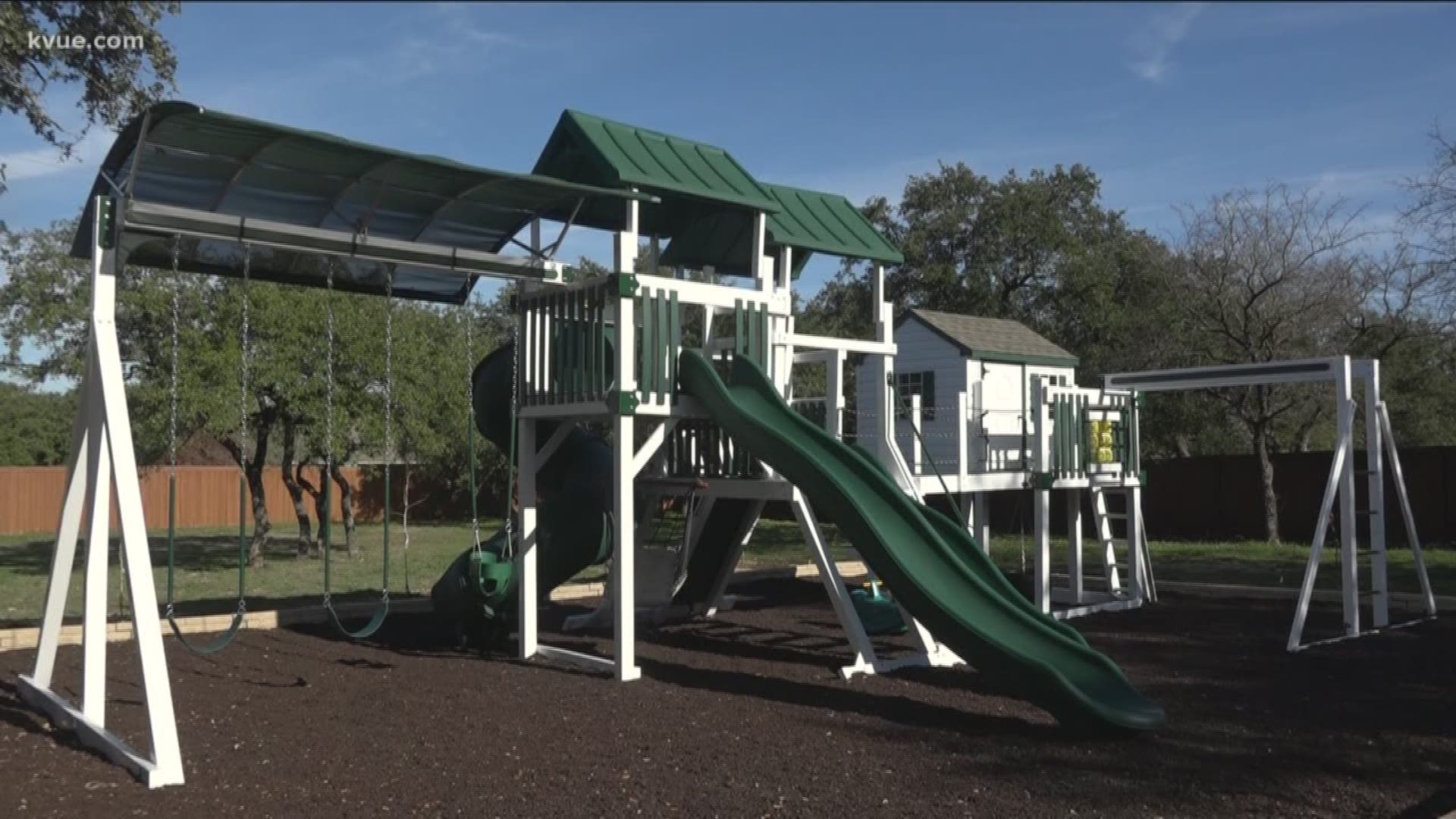 GEORGETOWN, Texas — A Georgetown couple – Richard and Carole Gottleib – has dismissed the lawsuit they filed against their neighbors – Kim and Jason Costa – over a playscape the Costas built for their terminally-ill son, the complainants' attorney said Wednesday.

The lawsuit claimed that the Costas did not submit proper plans or specifications of the playscape to the Architecture Design Review Committee (ADRC) – who Estrella Subdivision HOA appoints to review "construction for improvements" – prior to its installation.

Kim Costa posted on her Facebook page, disputing that claim and saying that the HOA did approve for the playscape to be installed.

"A playscape. Who has ever heard of being SUED over a playscape? Well friends, it’s true. We officially got served this morning with a lawsuit brought on by our next door neighbors. They don’t 'like' our playscape. They claim it brings down their property value. They call it an eyesore and have told us multiple times it goes against our HOA.

A little bit of background: We are NOT the first neighbor he has sued. We live on a 1 acre lot. We tried to get a privacy fence several times and it got denied. (Wrought iron fences only). It’s on OUR property. The HOA approved the playscape before it was ever even installed!!! This has been an on-going debacle since the day we got it. Our next door neighbors have been very vocal that they do not like it and that we should have asked THEM about getting a playscape.

Here’s the kicker — They know Colton’s story. They know what our family has been through. They know he had a bone marrow transplant and has a terminal illness. Yet they still perused a lawsuit. They’re suing for 'damages.' $100,000 in damages. So I come to you all asking for prayers. Prayers for guidance during this time trying to navigate a lawsuit like this. Prayers for our neighbors to soften their hearts and realize how much stress this is putting on my family. And prayers we find a resolution to this situation. I never could’ve imagined we’d be sued for something so petty. Something like a playscape that makes Colton the happiest little boy. ❤️"

Kim Costa
A playscape. Who has ever heard of being SUED over a playscape? Well friends, it's true. We officially got served this morning with a lawsuit brought on by our next door neighbors. They don't...

Kim and Jason's son, Colton, is diagnosed with Mucopolysaccharidosis Type I (MPS1), a rare disease in which the body is missing or does not have enough of an enzyme needed to break down long chains of sugar molecules, according to the family. As a result, the molecules build up in different parts of the body and cause various health problems. It's also known as Hurler Syndrome.

“Hurler affects every organ system, every part of the body," Kim said. "So he does have hearing loss and he got his glasses, I think, when he was about 18 months old.”

Ultimately, the genetic disease is fatal.

“For our family, a lawsuit is something we never envisioned – especially over something like this," Kim said. "We’re just trying to give Colton the best life he can because, unfortunately, statistics show that Colton should not live past his 20s.”

KVUE received a copy of the lawsuit that the Costas' neighbors, the Gottleibs, had originally filed against them. The suit claimed the playscape could not be properly screened by the ADRC due to the fact that it was allegedly not reviewed before installation – and thus would remain in violation of ARDC guidelines as long as it was allowed to stay in its location.

“My husband submitted documentation of how big it was, exactly where it was going to go on our lot, and the ADRC approved it," Kim said.

The complainants filed multiple requests to Estrella HOA to enforce its Declaration of Covenants, Conditions, and Restrictions prior to suing the Costas, and Estrella HOA failed to do so, the lawsuit read.

The lawsuit concluded with a request for the playscape to either be permanently removed or to take necessary action to comply with the ADRC guidelines.

According to the lawsuit, if the Gottleibs were to win the case, the Costas could have had to pay attorney and court fees, potentially up to $100,000.

A verified GoFundMe fundraiser was set up to help the Costas with legal expenses. No word yet on what will be done with the money raised now that the lawsuit has been dismissed.

Want to vote in Texas' 2020 primaries? Then you need to register soon