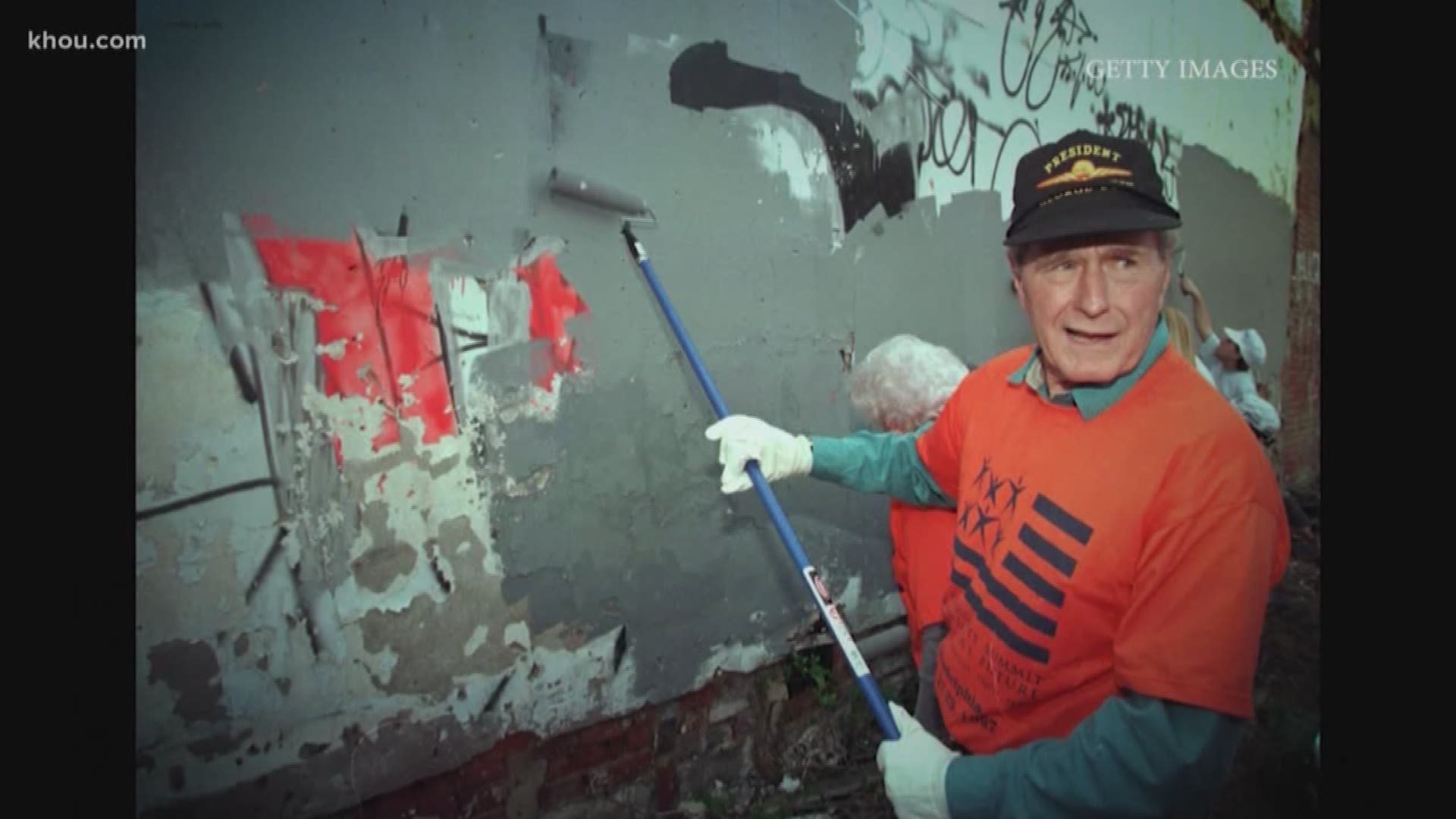 He was preceded in death by his wife of 73 years, Barbara Pierce Bush.

During his term in office, a revolution of human liberty swept the globe, emancipating tens of millions of people and unleashing a series of transformative events: Freedom prevailed in the Cold War as the Soviet Union imploded; The Berlin Wall “fell,” and Germany united within NATO following 45 years of postwar division.

From Eastern Europe to the Baltic States to Latin America to the former Soviet republics, many liberal democracies supplanted totalitarian regimes. During this “historic period of cooperation” as he called it, President Bush worked with Soviet leader Mikhail Gorbachev and other key global figures to end the Cold War peacefully and usher in a new geopolitical era marked by political self-determination, the spread of market capitalism, and the opening of closed economies.

In August of 1990, after Iraqi troops under Dictator Saddam Hussein invaded neighboring Kuwait, President Bush forged a coalition of 32 disparate nations to restore Kuwaiti sovereignty and uphold international law. He subsequently convened the Madrid Peace Conference in the Fall of 1991, bringing Israel and her Arab neighbors together in face-to-face discussions for the first time in history. 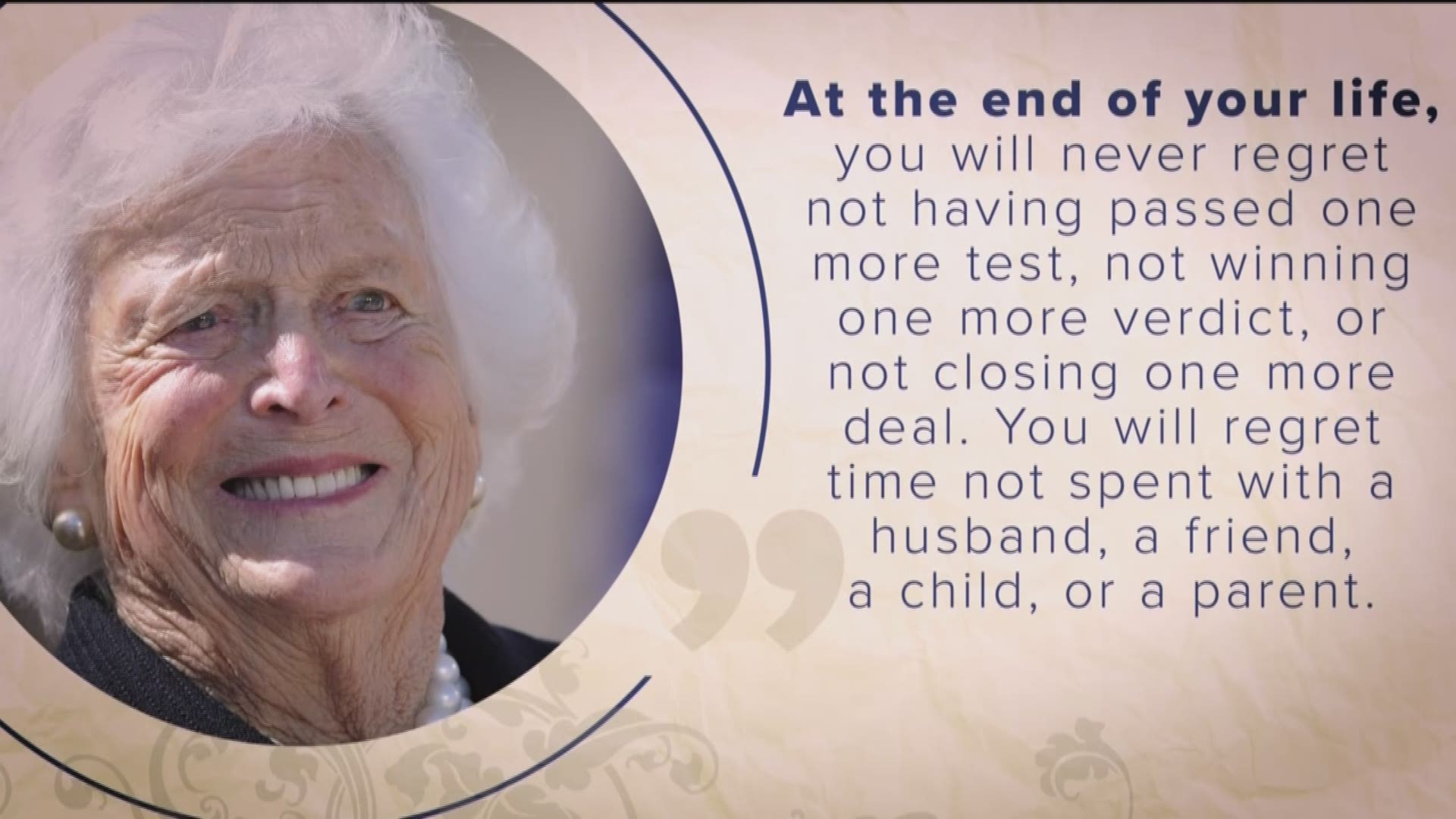 President Bush also drastically reduced the threat of nuclear attack by signing two Strategic Arms Reduction Treaties in 1991 and 1993 and negotiated the North American Free Trade Agreement (NAFTA) in 1992 – which President Clinton later signed into law. He ordered military operations in Panama in December of 1989 to restore democracy and bring an international drug trafficker to justice, and in Somalia in December of 1992 to re-open food supply lines shut by feuding warlords that had precipitated a famine.

Mr. Bush was the first sitting vice president elected to the presidency since Martin van Buren in 1837, and only the second American president elected to serve a full term without party control in either chamber of Congress. Nevertheless, on July 26, 1990, President Bush signed into law the Americans with Disabilities Act, which among other accomplishment eliminated the barriers to employment, public accommodations, and transportation services for some 43 million citizens with disabilities.

Later that same year, he signed the Clean Air Act Amendments of 1990, which guided America’s environmental policy for more than two decades. The education summit Mr. Bush hosted in 1989 with all 50 U.S. governors helped to spur a national reform movement. The 1990 budget agreement he signed codified into law real caps on discretionary spending by Congress while cutting the budget deficit by historic levels.

As president, Mr. Bush launched his “Points of Light” initiative to promote volunteerism and community service across America, but long before he entered the political arena he demonstrated his belief that “there could be no definition of a successful life that does not include service to others.” In 1953, for example, he helped establish the YMCA in Midland, Texas, and served as chairman of the founding board. The Bushes also started the Bright Star Foundation to support cancer research following the death of their 3-year-old daughter, Robin, from leukemia on Oct. 12, 1953.

After leaving the White House, President Bush chaired the Board of Visitors at the University of Texas’ M.D. Anderson Cancer Center from 2001 to 2003, as well as the National Constitution Center from 2006 to 2008. Together with his wife, Mr. Bush served as honorary co-chair of C-Change – a collaborative group of key cancer leaders from government, business, and nonprofit sectors who are committed to eliminate cancer as a major public health problem. He also served as honorary chair of the Points of Light Foundation and the World Golf Foundation’s First Tee program.

Of special note was his partnership with his successor, President Bill Clinton, to spearhead public awareness and relief efforts for victims of the 2004 Indian Ocean Tsunami, Hurricanes Katrina and Rita in 2005, and Hurricane Ike in 2008. In 2005, President Bush accepted an appointment from United Nations Secretary-General Kofi Annan as Special Envoy for the South Asian Earthquake Disaster following an earthquake in Pakistan.

On Nov. 6, 1997, the George Bush Presidential Library and Museum opened on the campus of Texas A&M University in College Station, Texas, followed that same year by the adjoining George Bush School of Government and Public Service. Both institutions thrived with the active involvement of President and Mrs. Bush, who kept an apartment on campus and were regular fixtures at “Aggie” athletic events. Outside his family, President Bush considered the Bush School, which educates principled leaders in public service and international affairs, his most important legacy.

In 1998, President Bush and his former national security advisor, Gen. Brent Scowcroft, co-authored A World Transformed about the Bush administration’s foreign policy. In 1999, President Bush released “All The Best, George Bush: My Life in Letters and Other Writings,” a collection of letters written throughout his life.

President Bush received numerous honorary degrees and, after leaving the presidency, was awarded high honors from such nations as Kuwait, the United Kingdom, the Federal Republic of Germany, Nicaragua, Poland, the Czech Republic and Saudi Arabia. The CIA headquarters in northern Virginia, Intercontinental Airport in Houston, and several elementary and high schools were named for the former president.

He made seven post-presidential parachute jumps, the most recent of which took place on June 12, 2014, near his seaside home in Maine to mark his 90th birthday. 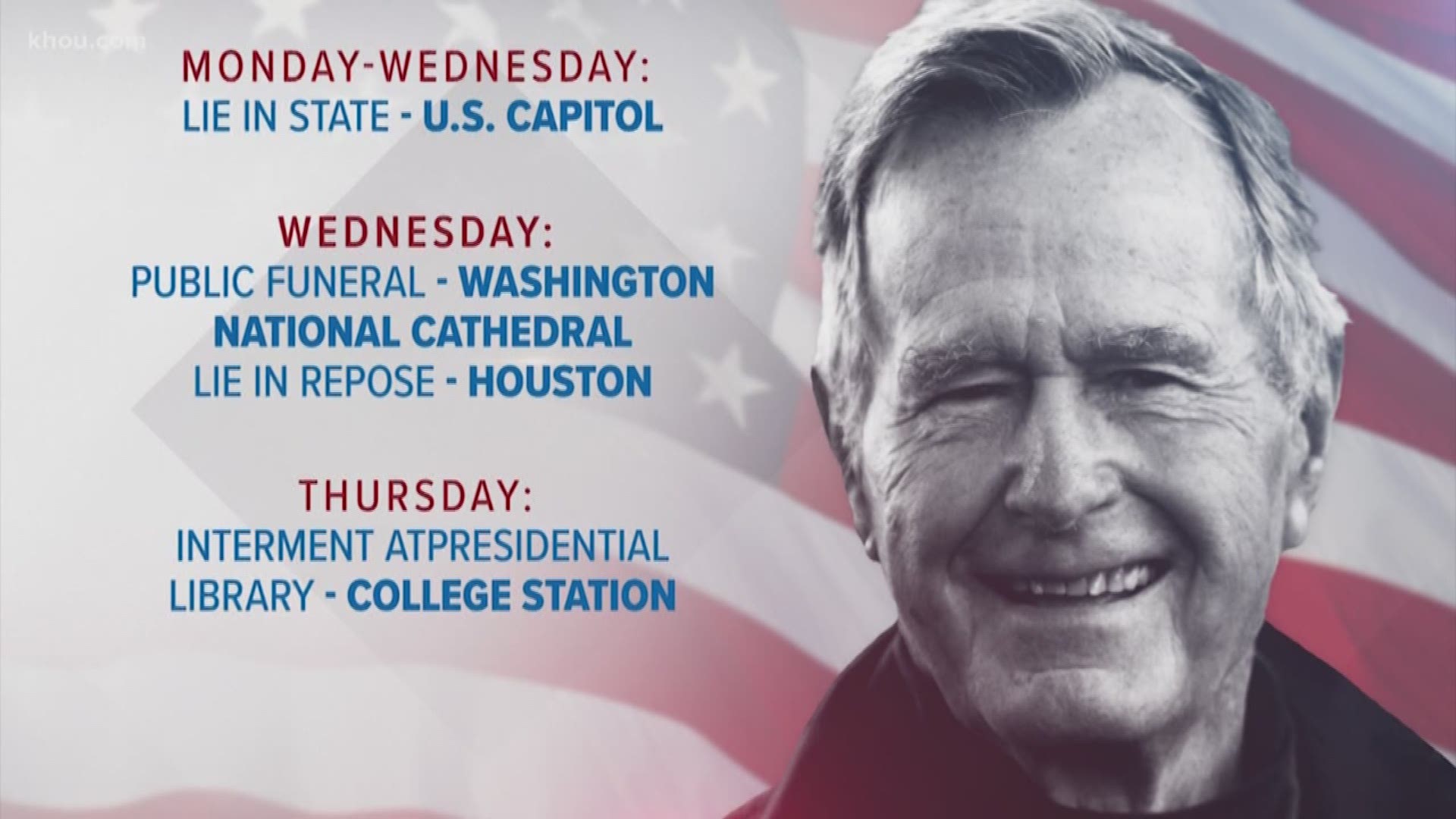 George Bush’s career in public service began in February of 1963, when he was elected chairman of the Harris County Republican Party. After losing his first campaign for the United States Senate in 1964, he was elected in 1966 to the U.S. House of Representatives from Texas’ 7th Congressional District and served two terms. Mr. Bush accepted a series of senior-level appointments following a second unsuccessful try for the Senate in 1970: U.S. Ambassador to the United Nations (1971); Chairman of the Republican National Committee (1973); Chief of the U.S. Liaison Office in China (1974); and Director of Central Intelligence (1976).

“There were always doubts at the beginning whether he (Bush) was up to these jobs,” New York Times columnist Scotty Reston opined in 1979, reflecting on this flurry of presidential appointments, “but applause for his record at the end.”

In 1980, Mr. Bush lost his first bid for the Republican presidential nomination to former California Governor Ronald Reagan, but accepted a spot on the GOP national ticket and served as the 43rd Vice President of the United States from 1981 to 1989. In that position, Mr. Bush managed federal deregulation and anti-drug efforts, and headed the Reagan administrations’ effort to combat terrorism.

In foreign policy, President Reagan dispatched him at a pivotal and contentious time to help manage negotiations with key NATO allies leading to the deployment of Pershing II missiles in West Germany – a critical turning point in the Cold War.

In 1988, Vice President Bush won the Republican nomination for president and, with Senator Dan Quayle of Indiana as his running mate, defeated Democrats Governor Michael Dukakis of Massachusetts and Senator Lloyd Bentsen of Texas in the general election. That year, the Bush-Quayle ticket claimed over 53 percent of the popular vote en route to winning 40 states and 426 electoral votes.

Born on June 12, 1924, in Milton, Mass., George Bush admired his parents, Prescott and Dorothy, and credited them for the enduring lessons that shaped his life.

“My parents were my most important role models,” he later confided. “My dad stood for something and believed in giving back. My mother taught us fundamental things: ‘Don’t brag.’ ‘Think of the other guy.’ ‘Be kind to people.’ The things they taught me served me in good stead all the way through my presidency.”

Early in life he was nicknamed “Poppy” after his maternal grandfather, George Herbert Walker, whose sobriquet was “Pop.”

George Bush attended Phillips Academy in Andover, Mass. Following the attack on Pearl Harbor in December of 1941, Secretary of War Henry Stimson encouraged the graduating class at Phillips to enter college. Young George, instead, enlisted in the U.S. Navy on his 18th birthday and flew torpedo bombers off the USS San Jacinto in the Pacific. He was shot down on Sept. 2, 1944, while completing a mission over Chi Chi Jima Island and, tragically, lost his two crewmen William “Ted” White and John Delaney. By the time he was honorably discharged in September of 1945, Lieutenant Junior Grade Bush had logged 1,228 hours of flight time, 126 carrier landings and 58 combat missions. He was awarded the Distinguished Flying Cross and the U.S. Navy Air Medal with two gold stars. Mr. Bush later credited his Navy service with “making a man out of a scared little kid,” introducing him to shipmates from all walks of life, and later informing his decision-making as commander-in-chief.

After becoming secretly engaged in 1943 to the “first girl I ever kissed,” the returning war veteran married Barbara Pierce in Rye, New York on Jan. 6, 1945. The newlyweds welcomed their first child, George Walker Bush, in July of 1946 while the elder George attended Yale University. There, he also played baseball in the first two College World Series and graduated Phi Beta Kappa with a degree in economics. In June of 1948, the young Bush family moved to West Texas where Mr. Bush began making his way in the oil business. One of his companies, Zapata, eventually became the Pennzoil Corporation, but long beforehand Mr. Bush launched a subsidiary, Zapata Off-shore Co., that pioneered offshore drilling with operations in the Gulf of Mexico, Brunei, Venezuela, the Sea of Japan and the Persian Gulf. After moving to Houston in August of 1959, the Bushes joined St. Martin’s Episcopal Church where Mr. Bush served as a vestryman from 1965 to 1968.

President Bush, or “41” as he was informally known after George W. was elected president, loved nothing more than fishing with his family and grandchildren in the coastal waters of Maine – where he also reveled in driving his motorboat at high speeds and entertaining an endless procession of guests. He considered Houston, Texas his home – and Walker’s Point, the family home where he spent a part of every summer except 1944 (when he was serving in World War II), as his “anchor to windward.”

“Now that my political days are over,” he said the day his presidential library was opened in 1997, “I can honestly say that the three most rewarding titles bestowed upon me are the three that I’ve got left: a husband, a father and a granddad.”

George Herbert Walker Bush prized loyalty and duty and was devoted to his faith, the wife and family he loved, his countless friends, and the country he served always to the best of his ability. Despite the rancor and cynicism that occasionally engulfed politics during his lifetime, he considered public service a noble calling.