The final of several somber memorial services for George Floyd are set to take place in Houston on Monday and Tuesday. Here are the latest updates. 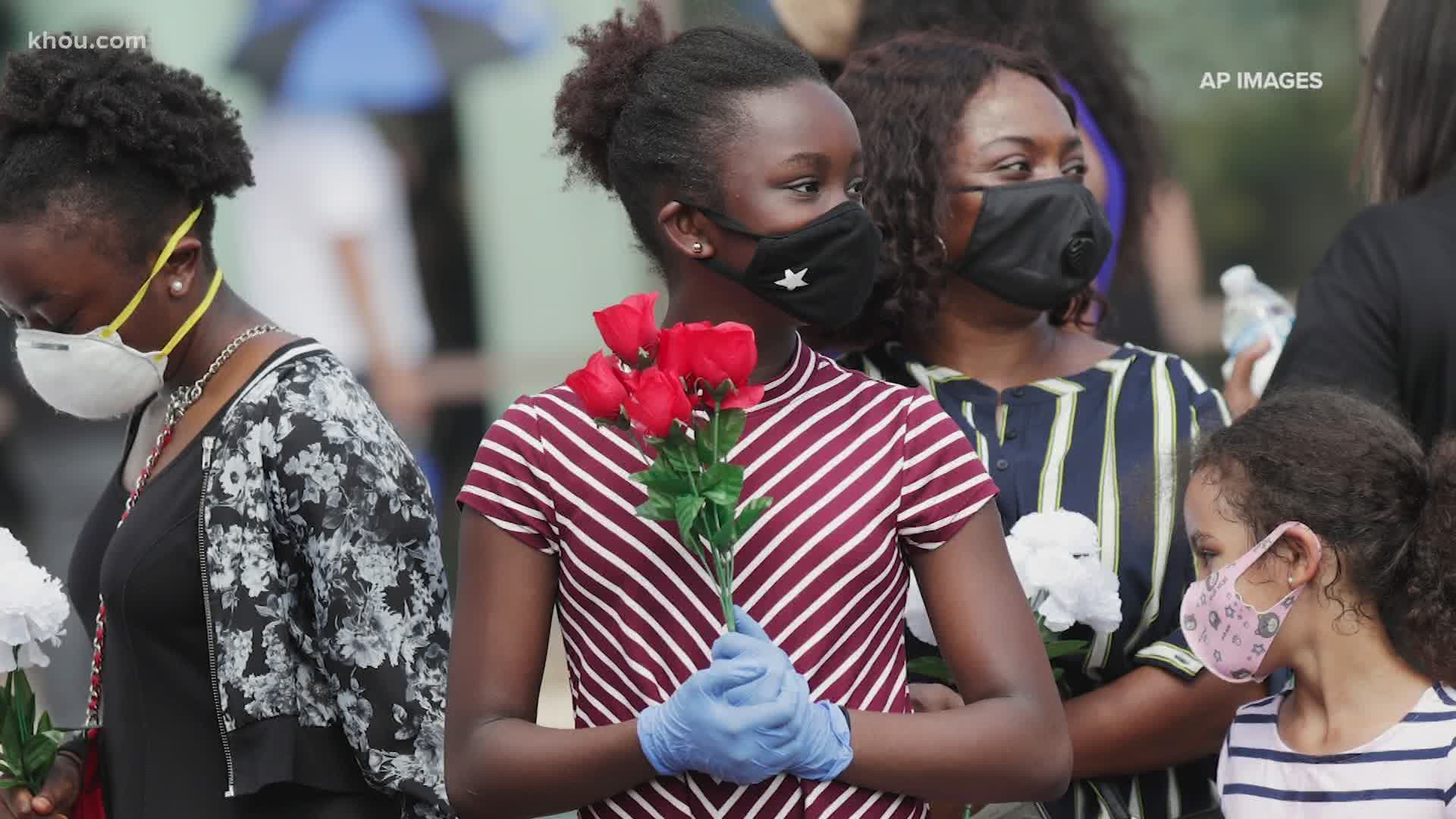 HOUSTON — Thousands of people paid their respects to George Floyd at a public viewing at Fountain of Praise church in southwest Houston Monday. A private funeral will take place there on Tuesday.

>> This live blog has been archived; get the latest updates and view Tuesday's blog with funeral coverage here <<

George Floyd funeral: What to know for Tuesday's service

10:11 p.m. — George Floyd, a man who has become an icon for social change and police reform, will be laid to rest Tuesday in Pearland.

City of Pearland officials confirmed Floyd will be taken to his final resting place in a horse drawn carriage. It will be for the last mile of his possession.

6:30 p.m. - Organizers of Monday's public viewing say 6,362 paid their respects to George Floyd on Monday at Fountain of Praise church in southwest Houston.

"We must never forget the name George Floyd or the global movement he has inspired."

"They are wonderful, God loving people," Abbott tweeted. "They will be the centerpiece of helping America bridge our racial divide & ensure equality, justice & fairness for everyone in America—& ensure what happened in Minn. never happens in TX."

2:35 p.m. - KHOU 11 crews reporting from The Fountain of Praise church said people have been waiting in line for hours to pay their respect to George Floyd.

12:48 p.m. - The Houston Fire Department said 20 to 30 people have been treated thus far for heat-related illnesses while attending the public viewing.

The department has a tent set up outside of the church to treat anyone who is feeling ill due to the intense heat. Ambulances are on-site to transport those who need to go to the hospital.

The church doors have opened early

11:30 a.m. - A large crowd has already turned out for today's public visitation, and it's very hot outside. The doors to the church have opened early so people can pay their respects.

They took the red-eye from California

11:18 a.m. - These two gentlemen took the red eye flight from San Francisco to Houston so they could honor George Floyd. “We represent 45,000 workers that are really sick and tired of the social injustice in this country.”

Line of mourners waiting for public visitation goes around the church

11:12 a.m. - 50 minutes until visitation starts & just look at how much this line has grown. Now curling around FountainLife Center & into empty lot nearby & back into parking lot. Plenty of parking left here. Buses should start rolling to church soon.

Messages are on their shirts and in the flowers

11 a.m. - So many different t-shirts with powerful messages out here as people wait to pay their respects to George Floyd. One one group put "BLM" for Black Lives Matters on the back of one of the floral arrangements.

10:44 a.m. - A community church member is handing out unity ribbons to mourners in line as they wait to pay their final respects.

All the way from Seattle

10:35 a.m. - Tyronne Harvey drove from Seattle to Houston to pay his respects to George Floyd & his family today.

Mourners lining up outside the church

10:12 a.m. - Hundreds of people are already lined up for the viewing, which begins at noon. More than a dozen shuttles are being used in rotation to transport mourners to and from the church, which is located in southwest Houston

9:15 a.m. - The body of George Floyd arrives at Fountains of Praise church in a beautiful golden casket for today's public viewing. His private funeral will take place tomorrow. 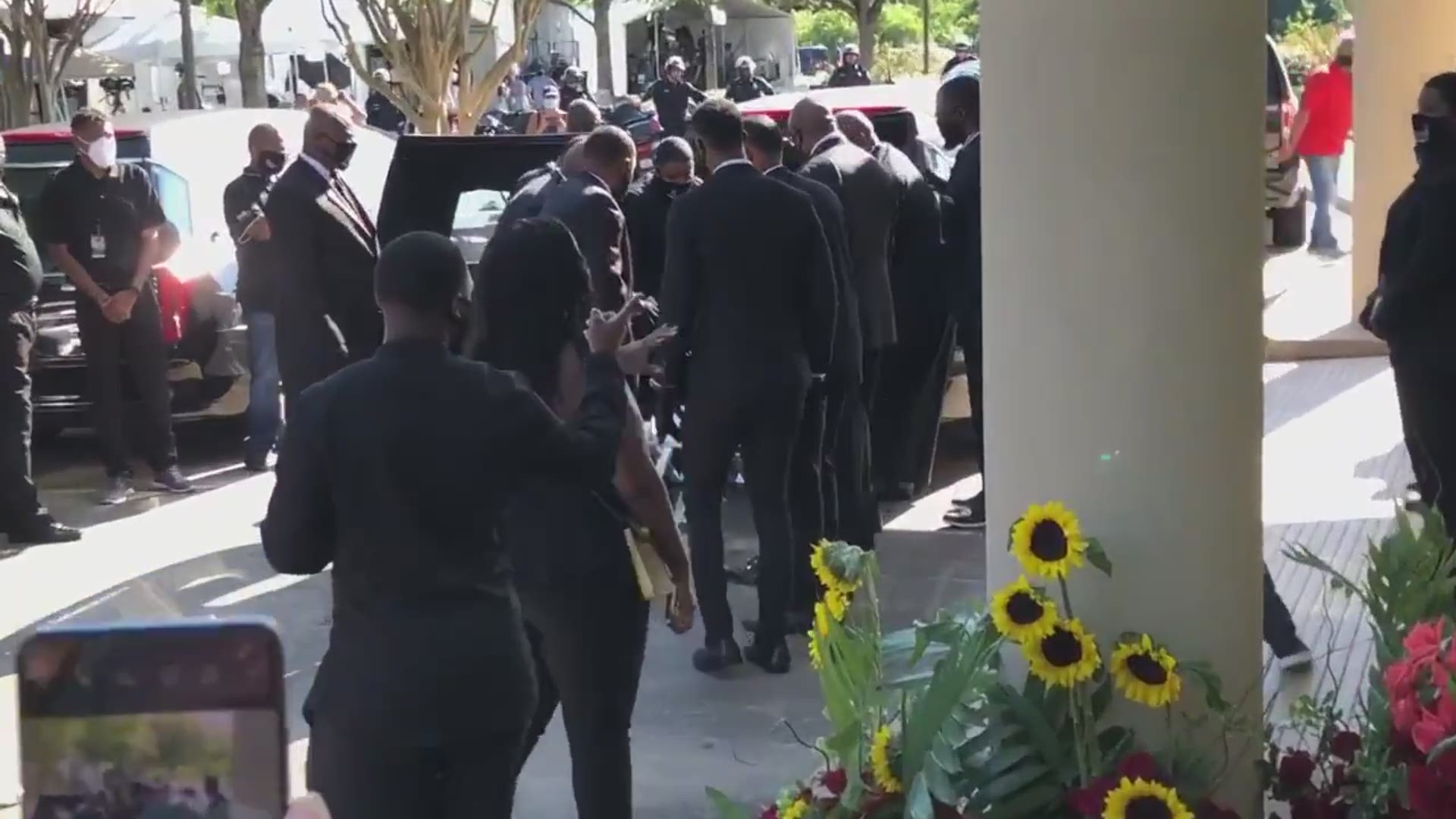 Brett White traveled from Dallas to attend the public viewing for George Floyd in Houston and he painted this portrait. Listen to his explanation of the symbols in this painting.

"A martyr for change"

"George Floyd has become a martyr for change," says Bishop James Dixon. Dixon will be among a powerful lineup of speakers at George Floyd's funeral Tuesday. They'll try to channel the wide range of emotions Floyd's brutal killing has stirred up in Houston and across the globe.

This is just one of the many touching ways Houstonians are preparing to say a final farewell to George Floyd.

Houston Mayor Sylvester Turner is asking that people don't all come to the visitation at noon, that they spread it out over the six-hour public viewing.

Bun B: People of color cannot stop racism by themselves, now is not the time to be indifferent

Former Vice President Joe Biden will be in Houston today, the farthest he's traveled from home since the beginning of the coronavirus pandemic. He's scheduled to meet with the family of George Floyd, a Biden spokesman tells CBS News. Biden will not attend Floyd's funeral but will deliver a taped message. Biden's team says the presidential candidate didn't want to disrupt the funeral service with extra security precautions by attending in person.

These images are going viral on Twitter this morning with the hashtag #GeorgeFloyd. They show tens of thousands participating in peaceful marches over the weekend: