The Dick Dowling and Spirit of Confederacy statues will be removed on Juneteenth. 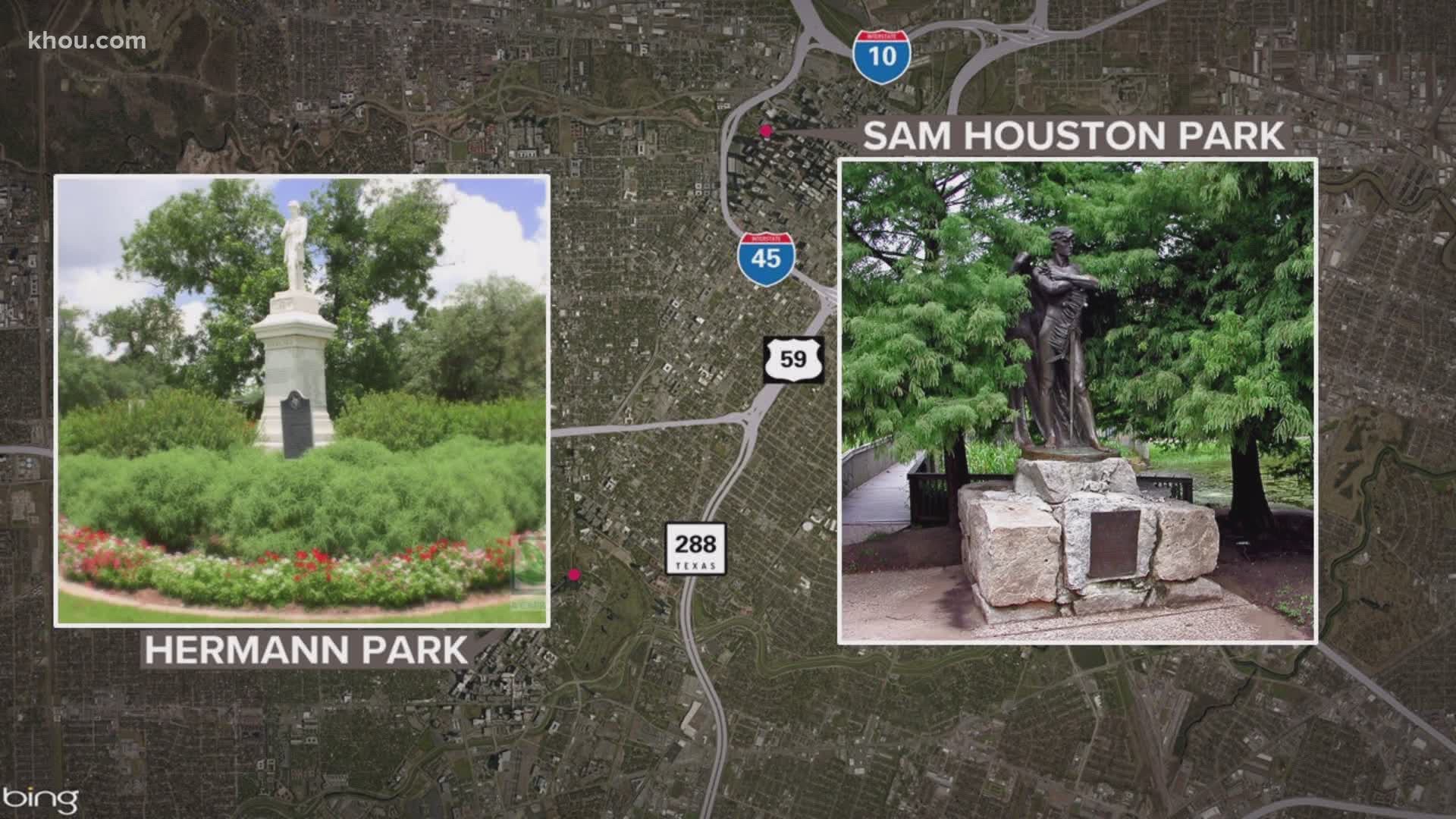 HOUSTON — Two Confederate statues in Houston will be relocated in order to provide better context and prevent vandalism. The statues are currently located in two city parks.

The Dowling and Spirit of Confederacy statues will be removed on June 19, the Juneteenth holiday that memorialized the day slaves in Texas learned they were granted freedom. There are several other statues in the city that relate to slavery, the Confederacy and the Civil War, click here to see them.

The statue of Dick Dowling was erected in 1905 to guard the entrance to Hermann Park. Three years later, a bronze statue of an angel with a sword and a palm branch called the Spirit of the Confederacy was placed at Sam Houston Park. Today, both statues represent a painful chapter in American history for black Americans.

The plan to move the statues was hatched by Houston Mayor Sylvester Turner in 2017 when he appointed a "task force of historians, community leaders, and department directors to review the city's inventory of items related to the Confederacy and recommend appropriate action."

It’s a move some people support.

"I always ask people, what are you really preserving with those statues? And what’s been really preserved is the confederacy," Dr. Toniesha Taylor, with Texas Southern University, said. "Things end up in museums when their moment is over."

Others say the move is merely symbolic.

"I know people say that’s it’s legacy, it’s history, it’s a reminder of heritage, but that heritage was built on dehumanizing human beings," Rockell Brown Burton said. "Removing the statues is not going to remove or replace systemic racism and it’s definitely not going to change the hearts and minds of those that still hold on those ideologies."

Both Taylor and Burton agree it’s a step in the right direction.

The task force recommended that the statues be removed from public property and not be destroyed and the city started developing a plan to find places to keep the statues permanently. Click here to read the final report.

The two statues will be relocated at no public cost, Turner said. The Houston Endowment provided a grant to move the Spirit of The Confederacy in Sam Houston Park downtown to the Houston Museum of African American Culture in the Museum District, where it will be put on display.

“Houston Endowment is proud to support the relocation of the Spirit of the Confederacy to the Houston Museum of African American Culture, where it can be interpreted in a way that promotes an inclusive and anti-racist community, said Ann Stern, President and CEO.

The Dick Dowling statue in Hermann Park is expected to be moved to a permanent display at the Sabine Pass Battleground State Historic Site in Port Arthur.

"While we have been working on a plan for some time, I have decided to move forward now considering the events of the past several weeks," Turner said. "Our plan for relocating Confederate statues from public parks to locations more relevant to modern times preserves history and provides an opportunity for our city to heal.”

The announcement comes amid days of unrest that has resulted in various statues and monuments being the targets of vandalism across the world, including in Houston.