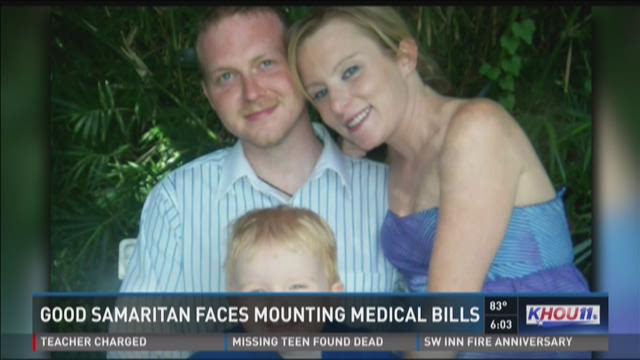 Friends of the man Houston police say tried to stop a mass shooter Sunday are raising money for medical bills as the victim faces years of recovery.

A close friend of Byron Wilson, 30, and his wife said the couple was trying to start a business to help improve life for them and their 4-year-old son before Dionisio Garza, 25, shot Wilson three times. Now they’re looking at potentially hundreds of thousands of dollars in medical bills after several surgeries and many more to come. Now, their friends are asking for help.

“He was the good guy, and it sucks when the good guy is the one that gets hurt,” said Angela Guerra, a close friend of Wilson and his wife.

Two broken legs, a shattered shoulder and the possibility of not being able to walk for the next two years: that’s the new reality Wilson is facing after facing down the mass shooter on Memorial Drive.

“The whole world kinda came down on them with this happening,” said Guerra.

Guerra says Wilson, who lives nearby with his wife and son, was at the TJ Maxx next door to the auto shop where Garza shot and killed Eugene Linscomb, 56, then began spraying automatic gunfire towards law enforcement officers, vehicles and their helicopter.

“He heard the commotion and the gunshots,” Guerra said. “He distracted the shooter, but the shooter in turn shot him, and he was able to stumble into that TJ Maxx and he called his wife.”

Guerra says Wilson, who was shot three times, is a licensed concealed handgun holder and typically has his gun on him when he’s not with his son.

“Unfortunately, he didn’t get to it first, the guy got him first,” Guerra said. “I can just imagine all the bills piling up, no way to work, no money coming in, medical bills, just my heart hurts for her.”

Overnight, Guerra turned that pain into action—setting up a GoFundMe account to help the family pay for medical expenses and spreading the word through social media. All the while, feeling grateful that her friend still has his life and his actions may have kept others from losing theirs.

“He could have prevented more people from being shot,” Guerra said. “He’s a hero, even though he was shot. He’s a hurting hero.”

Guerra says she sends her condolences to both victims’ families and the shooter’s families and says she hopes veterans with PTSD get the help they need.

She says if you’d also like to donate gas cards, grocery cards, or even cards just to uplift the family’s spirits, you can reach her at aguerra0411@yahoo.com.