It was just some fried chicken and warm sides, but true kindness that for at least one night gave a Houston family one less thing to worry about. 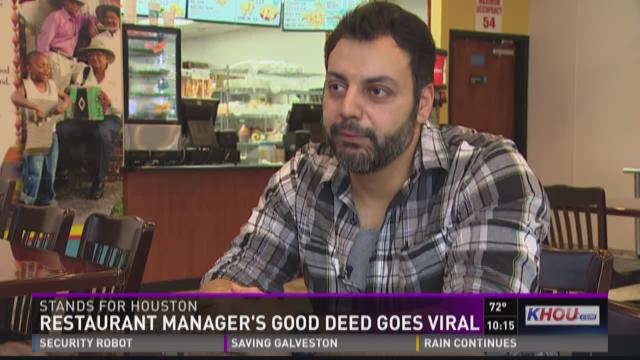 A simple post now shared more than 2,200 times led us to a Frenchy's Chicken off Richmond Avenue in west Houston where we met a man who loves to serve.

"We have our special on Wednesdays, usually the place is pretty packed," said manager Ahmed Elmadhoun.

Wednesday night, the lines were long for that 2-piece chicken special. But for Elmadhoun, two people instantly stood out.

"I noticed a lady came in with a young girl," Elmadhoun said. "She stood in line, and when it was her turn, she asked to speak to the manager privately."

That conversation hit his heart.

"Not typical. Definitely not something you hear everyday," he said.

The woman was hungry. So were her 10 grandchildren. But she didn't have the money to buy one piece of chicken.

"But for someone to offer to give me her ID, her social security card, and she had a little girl with her," Elmadhoun said. "She was really going through a tough time. She was pretty embarrassed. I said, 'Don't. We all go through tough times.'"

Elmadhoun told her to hang onto her ID and got to work in the kitchen frying up chicken for a family in need.

"I made her a big box, filled it up with chicken, anything I could find," Elmadhoun said. "I put together a whole lot of small sides, a little bit of everything, some French fries."

He even threw in dessert for her grandchildren.

"I asked the little girl, 'Do you want something sweet?' She said she wanted a lemon cake," Elmadhoun said.

Elmadhoun gave her the bag full of food and told her not to worry. This meal was on him.

"She was so relieved," he said. "She had a smile on her face. She was in awe, couldn't believe someone would do that."

But it's what he said after that made all the difference.

"I told her if you're ever in that situation again, just come back and see me. We're here for you," Elmadhoun said.

It was just some fried chicken and warm sides, but true kindness that for at least one night gave a Houston family one less thing to worry about.

"That makes me really happy they went home and all ate," Elmadhoun said. "We all need a little help now and then."