The Fort Bend County Republican Party issued an apology for an ad featuring the Hindu deity Ganesh. It came after the Hindu American Foundation took offense to the ad. 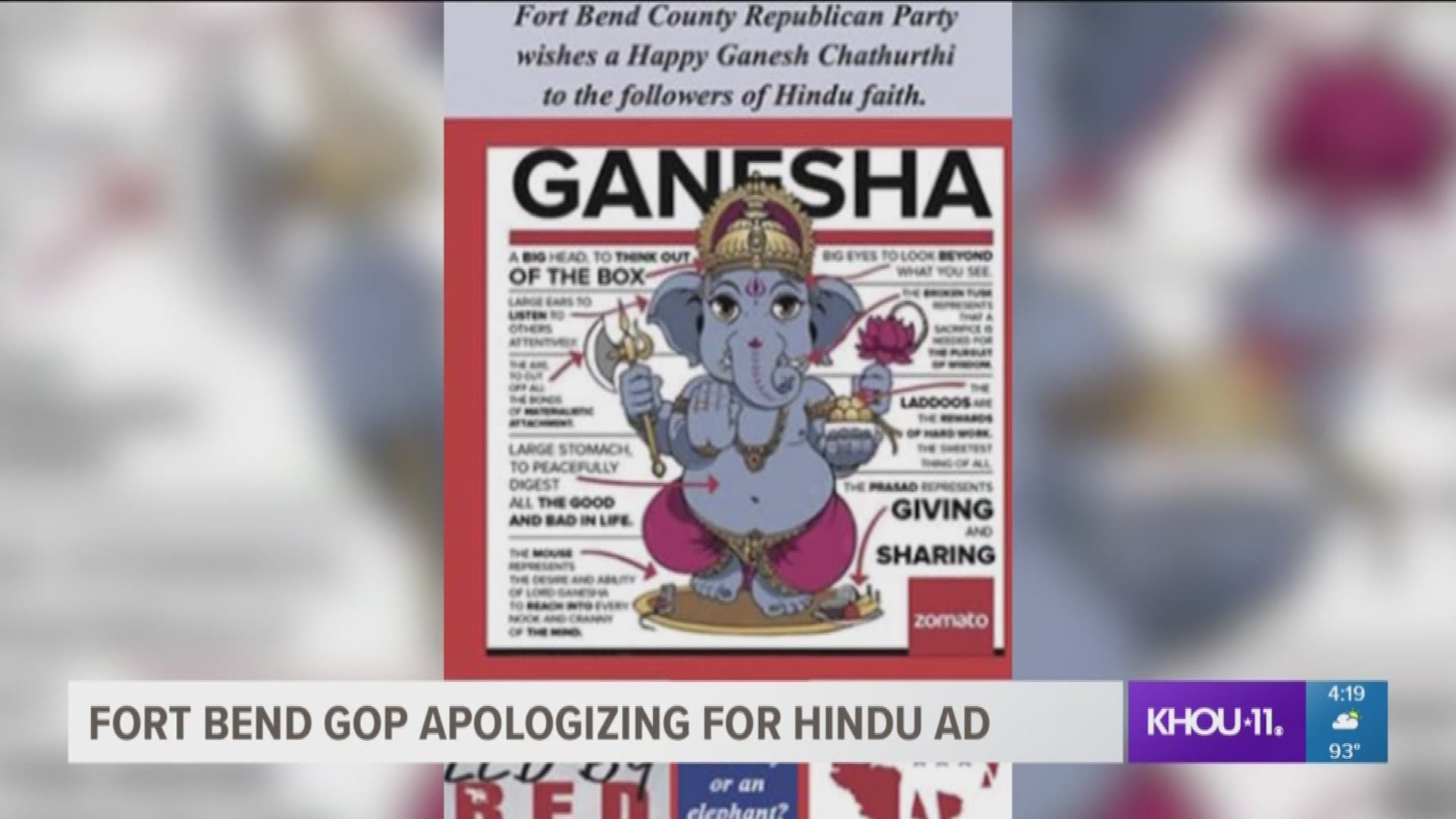 “Most people pray to him before an exam or when they’re embarking on a new endeavor to make sure it is successful,” said Hindu American Foundation board member Rishi Bhutada.

Like many others, Bhutada was shocked to see Ganesh featured in an ad paid for by the Fort Bend County Republican Party. It appeared in a local newspaper that caters to the Indian community and offered well wishes to the community. But is also asked if people preferred to worship a donkey or an elephant.

“A lot of people saw this and said, 'Wow, how could they do something like this?'" Bhutada said.

Many took offense that Lord Ganesh was equated to an elephant and beliefs were used in a political context, although Bhutada believes it may have been a good-faith attempt to reach the Hindu community.

“I think it was misguided,” Bhutada said.

Jacey Jetton, Chairman of the Fort Bend County Republican Party, issued a statement on Wednesday. He said the ad was developed with input from those in the Hindu faith.

“The ad was not meant to disparage Hindu customs or traditions in any way,” Jetton said in the statement. “We offer our sincerest apologies to anyone that was offended by the ad.”

Kulkarni considered the ad a learning opportunity for those willing to participate in the process.

“To actually sit down at a table in a public forum to show that we respect people of every faith and every race and all communities in this area,” Kulkarni said.

“We are blessed to have many supporters from the Hindu community and Pete has always been respectful of their culture, frequently celebrating their traditions throughout the year,” wrote campaign manager Craig Lewellyn. “Pete agrees the ad in question should have been more respectful and appreciated the apology made by the Fort Bend County Republican Party.”

"The Fort Bend County Republican Party placed an ad in the India Herald on Sept. 12 that was meant to be a greeting for Ganesh Chaturthi, a Hindu festival that was celebrated Sept. 13.

"The ad was meant to be part of the celebration and acknowledge the occasion. The ad was not meant to disparage Hindu customs or traditions in any way. As the party's first Korean-American Chairman, I have seen successful party outreach and understand the complexities of those efforts. This ad was created with input from those of Hindu faith so that we could properly pay respect to the sacred festival. This highlights the difficulty in outreach that can be positive for one group but not for another in the same community. We offer our sincerest apologies to anyone that was offended by the ad. Obviously, that was not the intent.

"It is our goal to build understanding and relationships with all of the different communities in Fort Bend County so that we can best convey our ideas and values. We welcome all those who are willing to be part of that process."