FLOOD WARNING: Homes at risk as San Jacinto River rises out of its banks

Moderate flooding is expected to continue along the river from Lake Houston to west of the freeway.

HARRIS COUNTY, Texas – Street flooding is likely along the San Jacinto River near Humble where the river exceeded its banks early Thursday.

The river is not expected to crest until this afternoon at 51.6 feet, putting some homes at risk, warns the National Weather Service.

"The river will fall below flood stage tomorrow late evening. At 51.5 feet... moderate lowland flooding continues with up to one foot of water is over the Road at the intersection of Bellau Wodd and Riviera and many homes in the Northshore subdivision are flooded," stated the NWS.

One of the neighborhoods, dealing with the rising river is the Northshore subdivision, s neighborhood that’s dealt with its fair share of flooding.

Several houses in the neighborhood were devastated during Harvey. Half of them are still empty, while others are being rebuilt.

Some of those homes flooded again, Thursday, after the San Jacinto River began rising.

The aftermath, each time, taking an emotional toll on folks living there.

“It’s very trying, very emotional, and we’re still recovering, two of my homes were flooded, I’m living in one, and the other one we haven’t been able to move back into yet,” said Victoria, whose lived in the neighborhood for seven years.

Fortunately, the home Victoria is living in was spared Thursday, but she says things could have been a lot worse.

Earlier this week, the city of Houston decided to lower Lake Houston by about 2 ½ feet, in preparation for the heavy rain.

A decision that Victoria believes made a big difference.

According to officials this time, the river is rising because of the runoff from Cypress and Spring Creek.

Under the Eastex Freeway the river had already overtaken nearby sidewalks where construction crews reportedly had to move equipment to prepare for the rising water before 6 a.m. 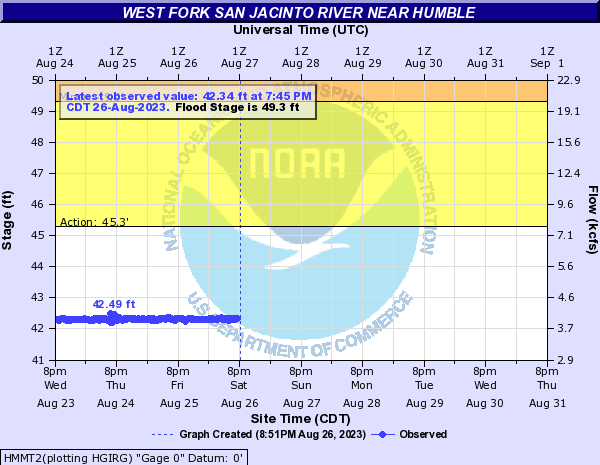 Moderate flooding is expected to continue along the river from Lake Houston to west of the freeway. This is a result of Spring and Cypress Creek run off.

The river will not drop back below flood stage for about 24 hours.

Aerial Views: Homes at risk as San Jacinto River rises out of its banks

Aerial Views: Homes at risk as San Jacinto River rises out of its banks

1 / 52
Street flooding is likely along the San Jacinto River near Humble where the river exceeded its banks early Thursday.