HOUSTON - Firefighters responded to a two-alarm fire at an apartment complex shortly before 2:30 p.m. 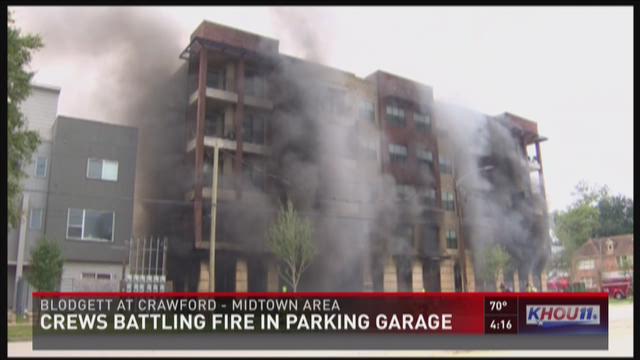 HOUSTON - Firefighters responded to a two-alarm fire at an apartment complex shortly before 2:30 p.m.

Air 11 was over the scene where heavy smoke could be seen. According to a nearby resident, the complex is called Hampstead Apartments, located at 1508 Blodgett near Crawford.

According to HFD, one person was transported to a nearby hospital for smoke inhalation. Three people were rescued from the complex after being driven to their balcony because of smoke and fire. Firefighters also rescued many pets.

The fire appears to have started in the ground floor parking lot. Houston Arson Bureau is still investigating.

HFD declared the fire under control at 3:10 p.m.

1 / 11
<p>Crews responded to a two-alarm apartment fire near Blodgett and Crawford Tuesday afternoon.</p>