Feral hogs are such a big problem in The Woodlands, the township is hiring a consultant

'They're aggressive. They're a nuisance," and residents of The Woodlands are ready for the township to take stiffer action to remove feral hogs from neighborhoods. 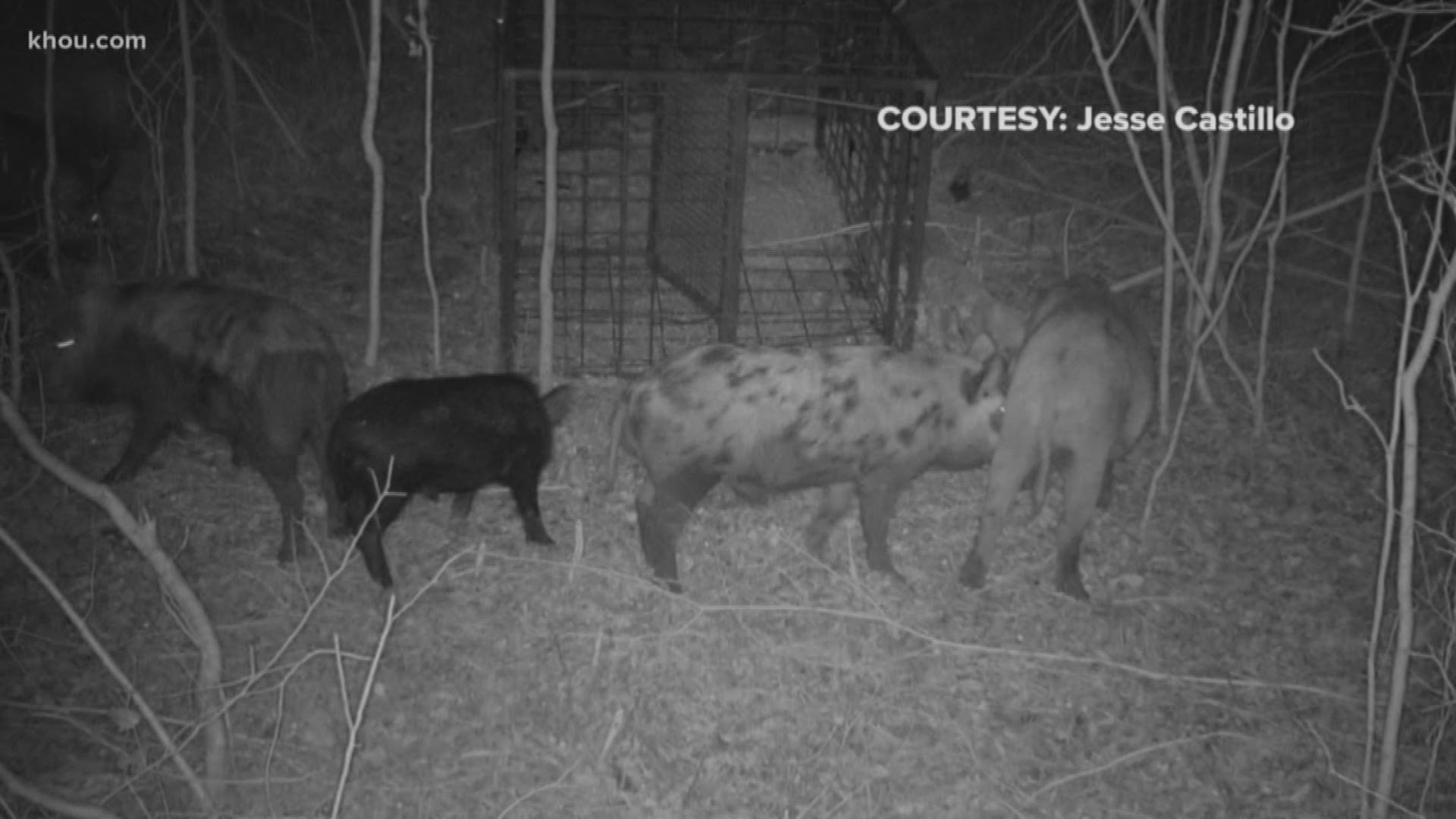 THE WOODLANDS, Texas — After several residents voiced their concerns Wednesday, The Woodlands Township approved the hiring of a special consultant to develop a game plan to reduce the feral hog population.

The Woodland is booming and the Spring Creek watershed, along with other creek beds, serve as a "hog highway," leading the feral animals into the yards of homes in the Grogan's Point neighborhood, which is where Linda Estrada lives.

"It's not only an issue of the destruction they cause, but of the safety," said Estrada during the Township's council meeting.

"We finally gave up and installed an electric fence."

Estrada said there have been feral hog sightings as early as 5:30 a.m. when children are standing at bus stops.

John Powers, Assistant General Manager for The Woodlands Township, understands the fear and frustration. "We’ve got over 225 miles of pathways. Hike and bike trails. It’s a very active community and safety is paramount."

Wildlife recovery businesses are currently setting up traps along Spring Creek that led the hogs from a corridor of sorts, "and into community where there’s a lot of easy buffet."

Alan Biggerstaff, who owns A&V Nuisance Wildlife Management and Control, told the town council that he used four feral hog traps in the Spring Creek area to caught 171 feral hogs in 2019. The Woodlands then pays to send the hogs to a processing facility.

In the near term, professionals have recommended that additional feral hog trapping efforts should be occurring, at a minimum, in the following locations:

Today, Montgomery County Precinct 3 Commissioner James Noack announced he contracted with a professional wildlife removal company in order to trap feral hogs in targeted areas along Spring Creek for the next 90 days.

The three-month program, at a cost of $14,500, is in response to constituent concerns recently brought to the Precinct 3 Office.

With an estimated population growing to around 2.6 million, feral hogs are a constant nuisance in regions across Texas. Wildlife experts believe 70-75 percent of the feral hog population must be eradicated each year just to keep up with the prolific reproduction rate of this non-native wild animal. While trapping has provided poor results for the long-term reduction of hog populations it has shown short-term benefits in targeted areas.

Walk in the Woods: Feral Hogs in a Suburban Landscape
Topic: Feral hogs are a growing problem in Texas because of their destructive feeding habits, potential to spread disease, and increasingly expanding population. Impacts are being felt in most areas of Texas including suburban landscapes like The Woodlands. Dr. John Tomecek, Assistant Professor and Extension Wildlife Specialist with Texas A&M AgriLife Extension, is a leading expert in the State on feral hog biology and control. His agency’s mission is both scientific and educational, providing landowners and governmental bodies with support on the identification, management, and abatement of damages from feral hogs. In this presentation Dr. Tomecek will provide education on the history of feral hogs in Texas, their environmental and economic impacts, and best practices to homeowners needing to manage damages themselves.

Going GREEN Lecture: Feral Swine: Challenges and Control
Topic: Feral swine (Sus scrofa) were likely first introduced to Texas by Spanish explorers in the 1600’s. Over the ensuing 300+ years they have expanded to become one of the most destructive invasive species in the State, wreaking ecological havoc, destroying crops and lawns, and costing the State some $400 million in damages annually. The secret to their success is multi-fold: highly intelligent, impressively fecund, and lacking in natural predators. They’re also remarkably adaptable, as more and more residents of urban environments are realizing. Chris Watts will walk through the history of invasive feral swine in Texas, their ecological and economic impacts, wildlife-human interactions, and urban feral swine management practices and strategies including IPM (Integrated Pest Management).