The FBI has joined the search for Faye Swetlik, the South Carolina girl who was last seen playing in her yard. 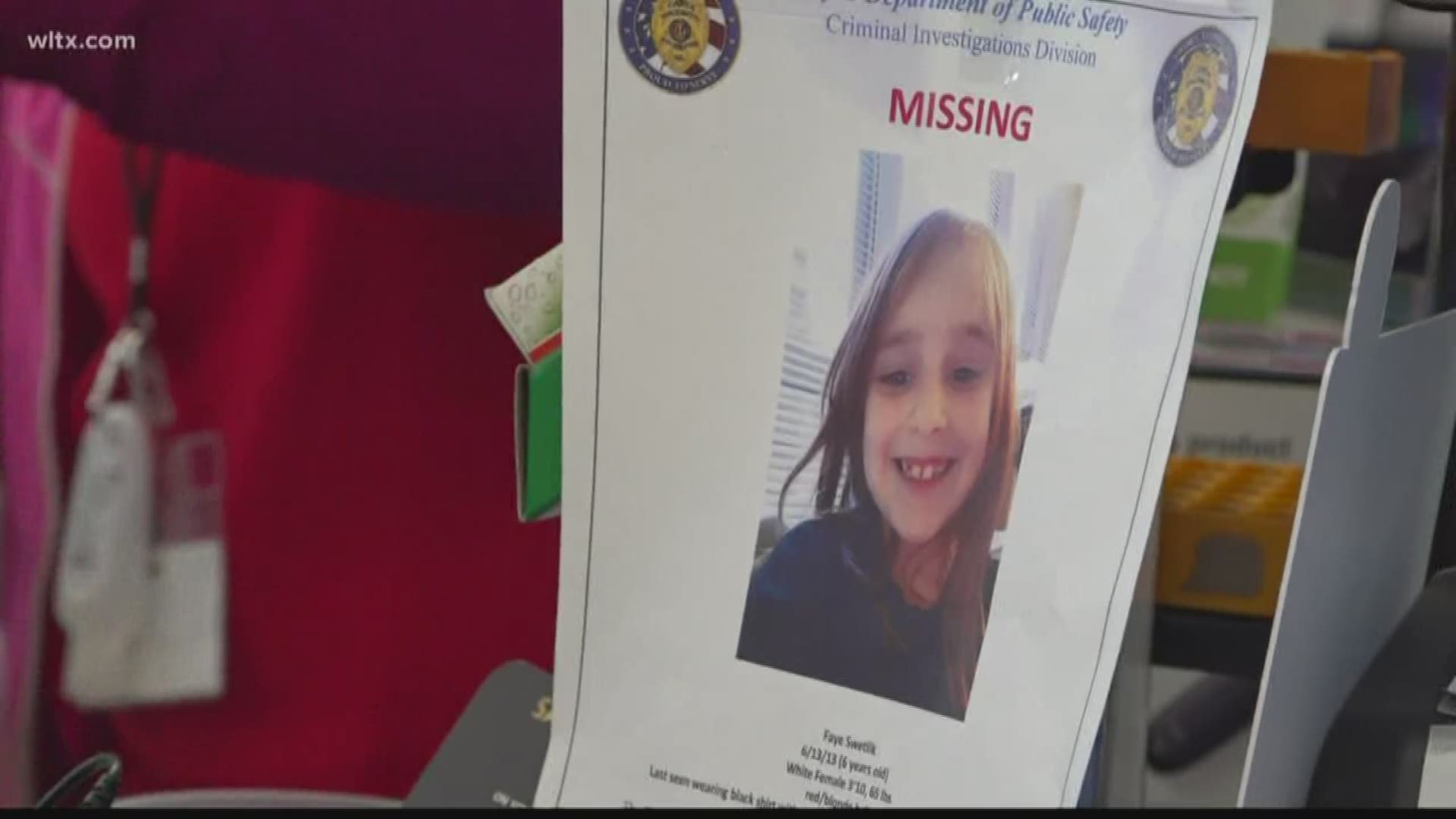 LATEST INFORMATION: Continued updates can be found by clicking here

Faye Swetlik was last seen playing in front of her yard in Cayce on Monday afternoon. Since then, there's been a massive search for her involving over 250 officers, including the FBI.

Here is what we know right now:

Chief Bryon Snellgrove said Tuesday at a news conference that they're asking for any and all help from the public to find 6-year-old Faye Swetlik.

"Faye is a bubbly, energetic first-grader at Springdale Elementary School. Faye's teacher loves her, Faye's SRO loves her, Faye's classmates love her," Snellgrove said. "When she walks into a room she brightens it up. Everybody loves Faye."

Swetlik was last seen around 3:44 p.m. Monday while playing in her front yard at Londonderry Lane in Cayce just off Highway 302 in the Churchill Heights neighborhood.

Snellgrove said the little girl's mother was home at the time of the disappearance. He said his investigators have spoken to the mother, the father, and the mother's boyfriend, and all are being cooperative.

When asked if there was evidence of an abduction, the chief said "not at this time, there doesn't appear to be."

He said at this point, the parents don't really know what happened to the little girl. Investigators haven't ruled any possibilities out, including that the girl could have walked away. He said the parents are anxiously awaiting her return.

"We're going to follow every lead until they're exhausted," Snellgrove said.

RELATED: A closer look at the investigative process into 6-year-old Faye Swetlik's disappearance

Officers said Tuesday morning that residents with RING doorbells are asked to check their video feed for clues or information about Swetlik.  At this point, law enforcement says all possibilities are open about where she could be.

How She Went Missing:

Investigators say she rode the bus home from school and got off near her home. Officers released a photo that was taken with a bus surveillance camera, showing her before she exited the vehicle Monday. The photo includes the clothes she was wearing at the time.

Officers are pleading with the public to give them additional recordings that may have been taken with Ring cameras or cellphones between 2 p.m. and 5 p.m. Monday. He said people should call the tipline because his officers want to look at any video.

More than 250 officers have been part of the search, going door to door, speaking to neighbors and searching the family home. Snellgrove said he invited the FBI to join the search, and they are actively participating in the search.

The search area is about a one mile radius of where the girl was last seen.

He said a high level of activity would be present until further notice. News19 observed people yelling out the little girl's name Monday night in an effort to find her.

She has also been entered into the NCIC database as missing.

WLTX's sister station WCNC Charlotte went to Faye’s father’s home in Rowan County Tuesday afternoon. His girlfriend, who considers herself Faye’s stepmother, said they last saw Faye around Christmas time, but they were actually planning to visit her in Cayce, South Carolina this weekend.The girlfriend said they are hoping anyone with video surveillance will provide it to police, adding they also hope anyone with information will call the special tip line for the case.

Capt. Adam Myrick with the Lexington County Sheriff's Office said that at this point, the case does not currently meet the qualifications for an Amber Alert, but he said that doesn't mean there isn't a hard push to find the girl.

RELATED: Criteria for when can an AMBER alert can be issued

Sgt. Chris Antley with the Cayce Department of Public Safety thanked the community for their overwhelming support and said the goal was a safe return of the little girl.

Officers say Swetlik is 3 feet 10 inches tall and has strawberry blond hair and blue eyes. She was last seen wearing polka dot boots and a black top. She is lactose intolerant and has a speech impediment.