Betzabe Gomez tried everything to get her family's home repaired after Harvey in 2017. She prayed. Even wrote to Santa. Well, her prayers are about to be answered. 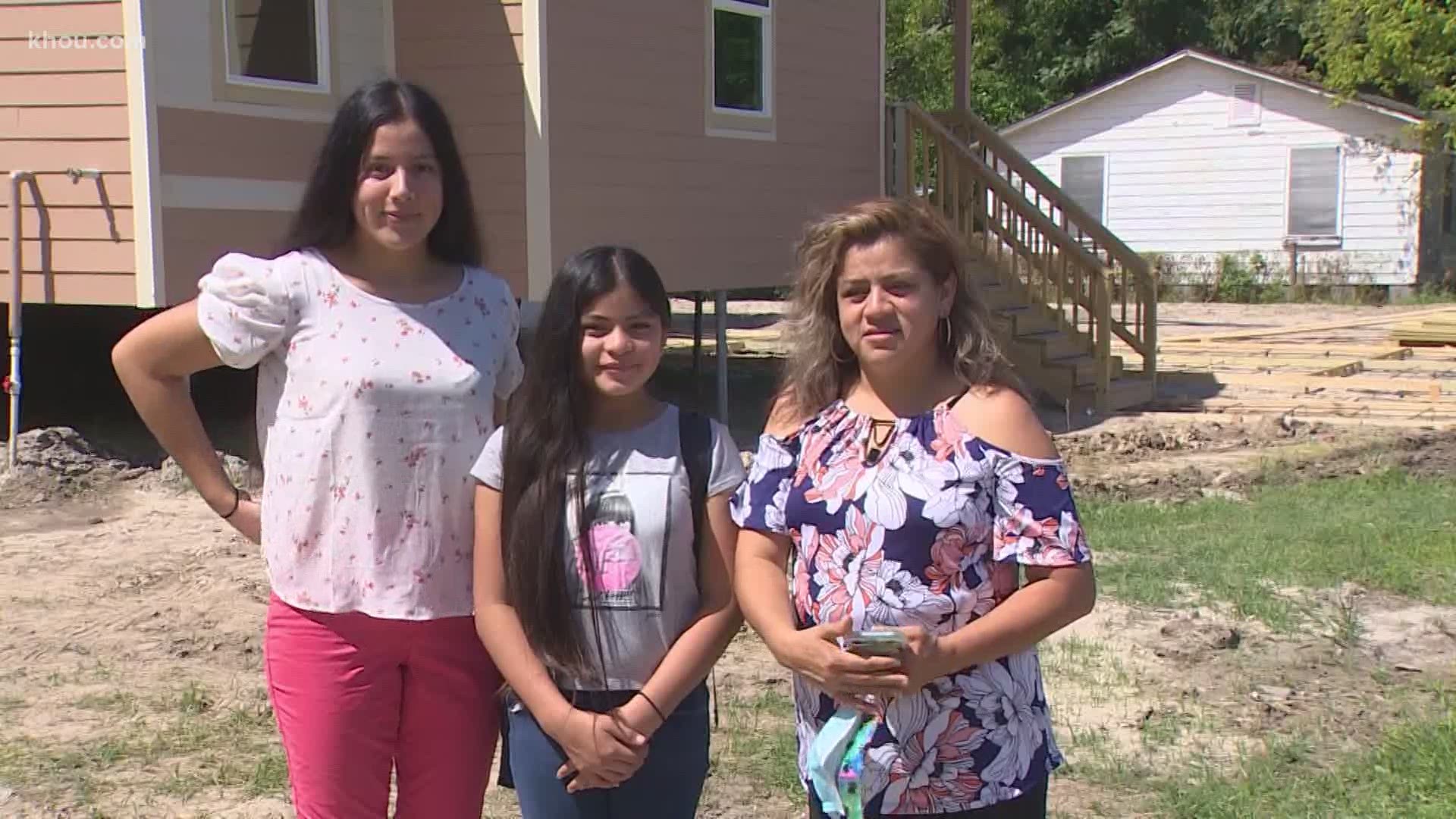 HARRIS COUNTY, Texas — Hurricane Laura is stirring up a lot of memories for families who lived through Harvey in 2017.

That historic hurricane made landfall three years ago Tuesday.

While so many have rebuilt and moved on, Houstonians like the Gomez family are still waiting to move back into their north Harris County home.

It should be any day now.

To understand just how far they’ve come, we need to take you back.

“It was raining too hard, like the rooftop just made a giant hole,” said Betzabe Gomez during an interview with KHOU 11 News Reporter Melissa Correa in December 2017. “Sometimes we have to put a big bucket so the rain doesn’t get in.”

Modest is a generous description for the Gomez home. But after Harvey, bad became, “Worse. Because now there’s holes on the wall,” Betzabe said.

Patches of glass and fabric keep the cold and the rain out. No help from FEMA is keeping the family of seven down. Betzabe is the youngest. She was 8 years old in 2017. She still believed in Santa Claus. The Aldine ISD 3rd grader decided to write Santa a letter in December 2017.

"I need help in my house because when it's raining, the rain comes in. When I look at it, I am sad. This is why I want help and what if it floods in there. Also, we don't have no concrete under the carpet. Also, when I come next to the wall the thing is, it's a giant hole. Anyway, when I come close to the room and the hole I can feel the rain and when It's raining we have to put a bucket.

"P.S. I will leave milk, cookies and carrots and water.

Betzabe Gomez wrote a letter to Santa, asking that he patch up the holes in her roof. But what this 8YO is receiving, is far greater than her wildest imagination. I ❤️ her and can’t wait to share her story on #KHOU11 at 6 pic.twitter.com/bI4Avg5W83

When asked why she chose to write the letter to Santa Claus, the 8-year-old said, “I've always been believing in him. I thought he would help me. I was just trying to let them, explain, my hard life that...my dad is sick and how the hurricane just had to come and just make a giant hole on the roof. I just want to explain my whole life, that I'm going through.”

If that’s what a hurricane can do to a kid, then this is what patience can bring to a family.

“But now, we don’t have to worry about no holes or anything because it’s a new house,” Betzabe said.

Harris County’s Housing and Community Development Department is using federal grant money to build the Gomez’s a four bedroom home on their property.

The finishing touches should be done in a matter of days. The project’s been delayed multiple times.

“And it’s like, yes, we’re happy to have our home reconstructed,” said Consuelo Gomez, Betzabe’s older sister. “But the whole purpose was for him. And you know, now that he’s not here, it’s just, it’s different.”

Harvey made landfall in Texas 3 years ago today. Seems like yesterday for the Gomez family. Their home took on so much water, their roof collapsed. It was a mess. As Laura looms I’m the gulf, the Gomez’s are still waiting to move back into their home. #khou11 pic.twitter.com/F6haIzcAKX

Martin Gomez died in February. The family buried him, then cleared their property and move into a motel so construction could begin.

Harris County is picking up the motel bill.

As soon as the family moves in, they plan to create a memorial for Mr. Gomez in the front yard.

“Since he passed away, I know he’s still watching me, but I could’ve seen him one last time, and that’s what I wanted,” Betzabe said.

That’s what storms stir up. The loss, heartache and the hope.

“It’s tragedy after tragedy, but Houston we gotta keep it together,” said Consuelo Gomez. “From the bottom of my heart, don’t lose faith.”

Because if a little girl can believe in miracles when all seems lost, why can’t we?