"We have to get very, very creative," said a recruiter for Apache Industrial Services during an in-person job fair at Minute Maid Park on Thursday. 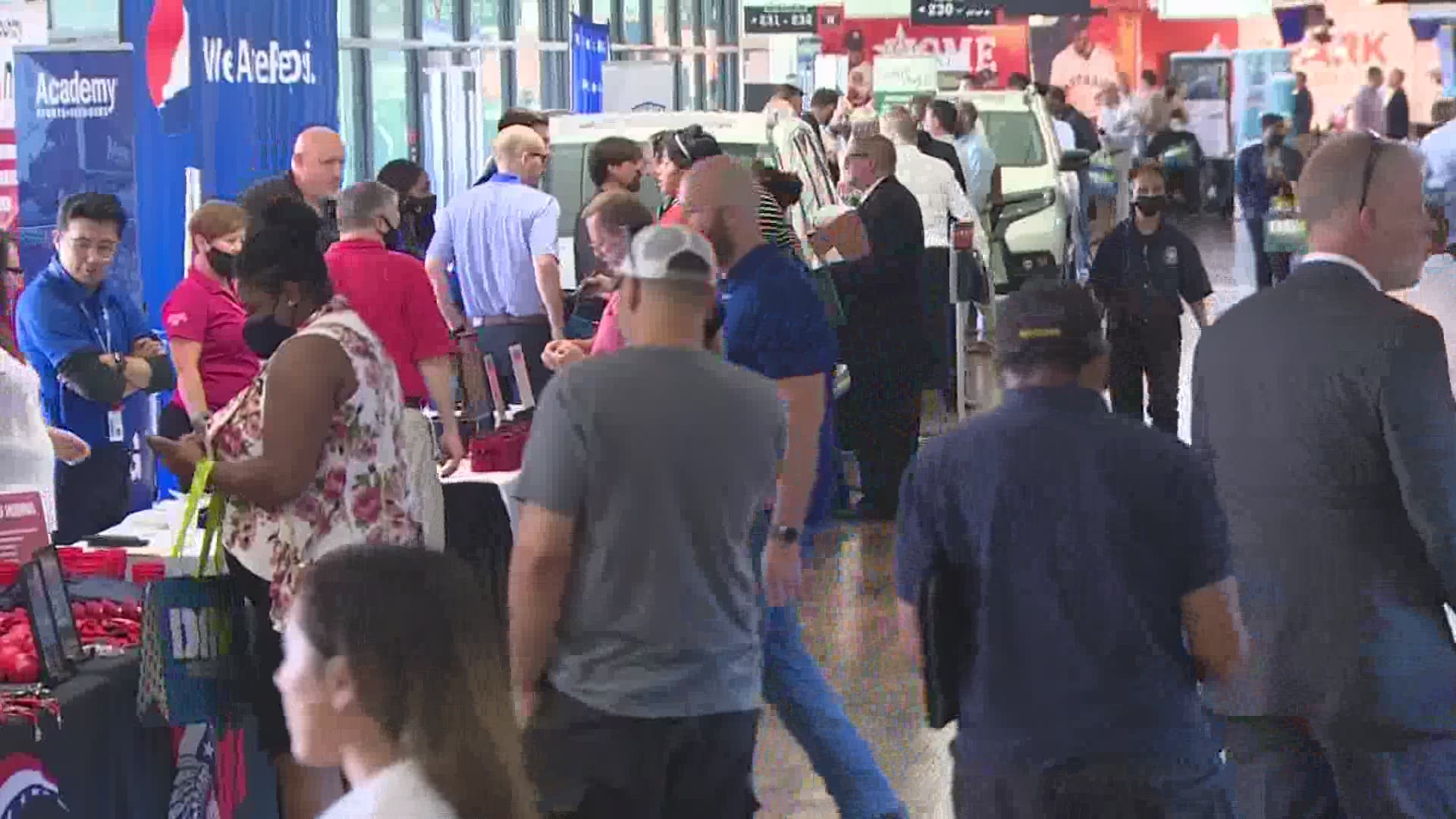 HOUSTON — The hot temperatures across Houston aren’t the only things spiking today. Prices for just about everything have jumped 5 percent over the past year. It's the biggest 12-month inflation spike since 2008.

But now to some good news: The U.S. Labor Department says unemployment claims fell to 376,000 this week. That's down by 9,000 unemployed Americans compared to the week prior.

And after June 26, we could see more Texans get back to work. That's when some unemployment benefits will stop at the request of Texas governor Greg Abbott.

According to the Texas Workforce Commission, Texans will also no longer be able to refuse work over COVID-19 safety concerns in the workplace.

At least four job fairs happened across the Houston area Thursday. Two of them, including one exclusive to military veterans and their spouses, were in-person.

Among the veterans perusing potential employers was 36-year-old Joel Martinez. The Marine Corps veteran was forced to leave his management job with a top delivery services company in December 2020.

Martinez says he contracted COVID-19. It took months for him to physically recover.

“I don’t see it as competition,” Martinez said of the sea of potential job applicants seeking information from the dozens of employers participating in today’s job fair.

But perspective makes all the difference.

“As you can see, it’s packed full of people,” said Dominique Moore, a recruiter for the Houston Police Department.

Moore is hoping to attract enough applicants that qualify for the hundreds of positions open within the department. Veterans, Moore says, make great job candidates.

“So as they come in, they already know the physical agility part. You know the running, the gunning. So it helps a whole lot," he said.

Some Texans are hustling to get a job by June 26th.

That's when fed unemployment benefits end AND Texans will no longer be able to get unemployment bc #COVID safety issues at work, according to @TXWorkforce #khou11 pic.twitter.com/CkD1ZGOCQx

Money helps, too. Saltgrass Steak House is advertising a $250 signing bonus. So is Mia’s Table in Cypress. So many positions, not enough applicants.

“We’ve having trouble manning up projects across the country,” said recruiter Ivan Dominguez.

Apache currently has jobs open in multiple states. Dominguez is hopeful the June 26 end to the additional unemployment weekly benefits will encourage more Texans to apply for jobs.

“There’s been an uptick, on our careers page, in applicants," he said.

With people ready to hand out their resumes while wearing their workday best, the return of in-person job fairs may be a sing change is coming.

“I definitely see that it’s going to bounce back,” said Martinez of Houston’s workforce.

It’s why he hopes to land a job, “hopefully within the next month,” before a saturated job market shifts to a competition among job seekers.