Disney executives and shareholders are in Houston Thursday for their annual shareholders meeting, but it's surrounded by controversy. 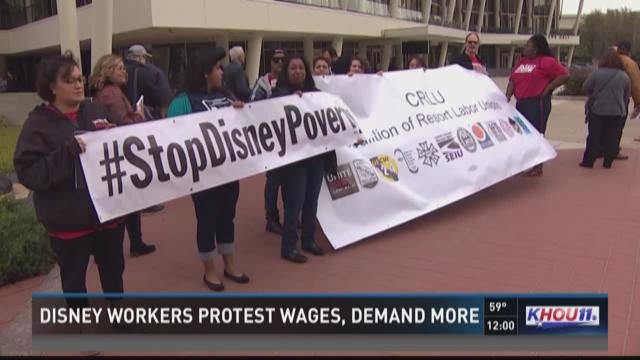 HOUSTON – Disney executives and shareholders are in Houston Thursday for their annual shareholders meeting, but it's surrounded by controversy.

According to a new report, “the Happiest Place on Earth” is not so much for those who work there.

"We're at the shareholders meeting to bring attention to Bob Iger to see if he knows what’s going on. We love this company. We want to stay here. but we just want to be able to support ourselves,” one protestor said.

It's on the heels of a study released last week surveying food and housing insecurity among employees at the California resort.

"We found that over three quarters couldn't make ends meet, 11 percent were homeless," Daniel Fleming, co-author of the study, said.

Fleming is a co-author of the study. He says while the average salary for the employees surveyed was just over $13 an hour, it's not a livable wage in the Golden State.

"Our concerns are to get info about the workers out to the public and the shareholders to try to get fair pay for these worker,” Fleming said.

"Nobody should be homeless making just 40-60 hours a week for such a large company,” another protester said

But Disney execs say that's not the case.

"The survey was funded by unions at Disneyland resort, some in negotiations with now, some will be soon so it was very politically motivated," one Disney official said.

Disney reps say the sample size for the survey was a small portion of the more than 30,000 workers at their California resort, and does not paint the full picture. They say they are proud of the employee experience they deliver.