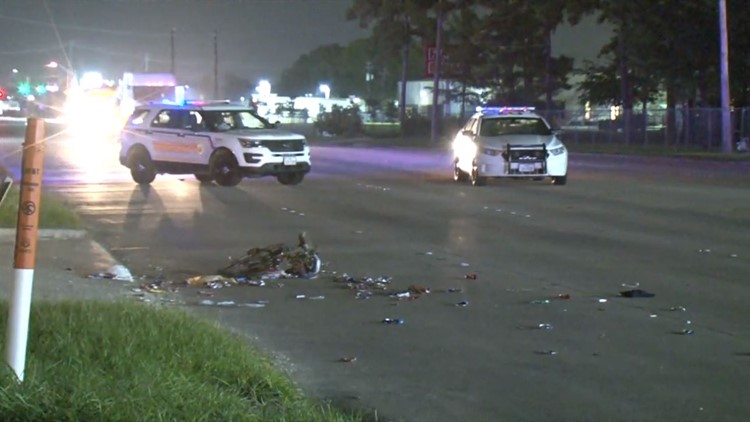 Photo by: KHOU
The crushed bicycle in the middle of the roadway in north Houston early Monday morning.

Victor D. Williams was riding his bike in the 1100 block of Aldine Bender when he failed to yield to a vehicle and was struck by a Toyota Tundra. He was then struck by an unknown black SUV.
Author: KHOU.com Staff
Published: 7:15 AM CDT October 15, 2018
Updated: 4:35 PM CDT October 16, 2018

HOUSTON - Deputies need the public's help with finding a driver who hit and killed a man Sunday night in northeast Harris County.

The victim has been identified as 54-year-old Victor D. Williams.The Harris County Sheriff's Office described him as a beloved family man that lived in the Aldine area.

Around 10:50 p.m., Williams was riding his bike in the 1100 block of Aldine Bender when he failed to yield to a vehicle and was struck by a Toyota Tundra, deputies said.

Williams was thrown from his bike after the initial accident and then hit by an unknown black SUV. Williams was taken to the hospital where he later died, according to deputies.

Anyone with information is urged to call HCSO Vehicular Crimes Unit at 713-274-7400 or Crime Stoppers at 713-222-8477. Crime Stoppers will pay up to $5,000 for any information leading to the charging and/or arrest of the suspect in this case.