Dangers lurk in the waters of Lake Lanier

As thousands of Georgians hit Atlanta’s favorite lake this holiday, they may be unaware of the dangers below the surface. 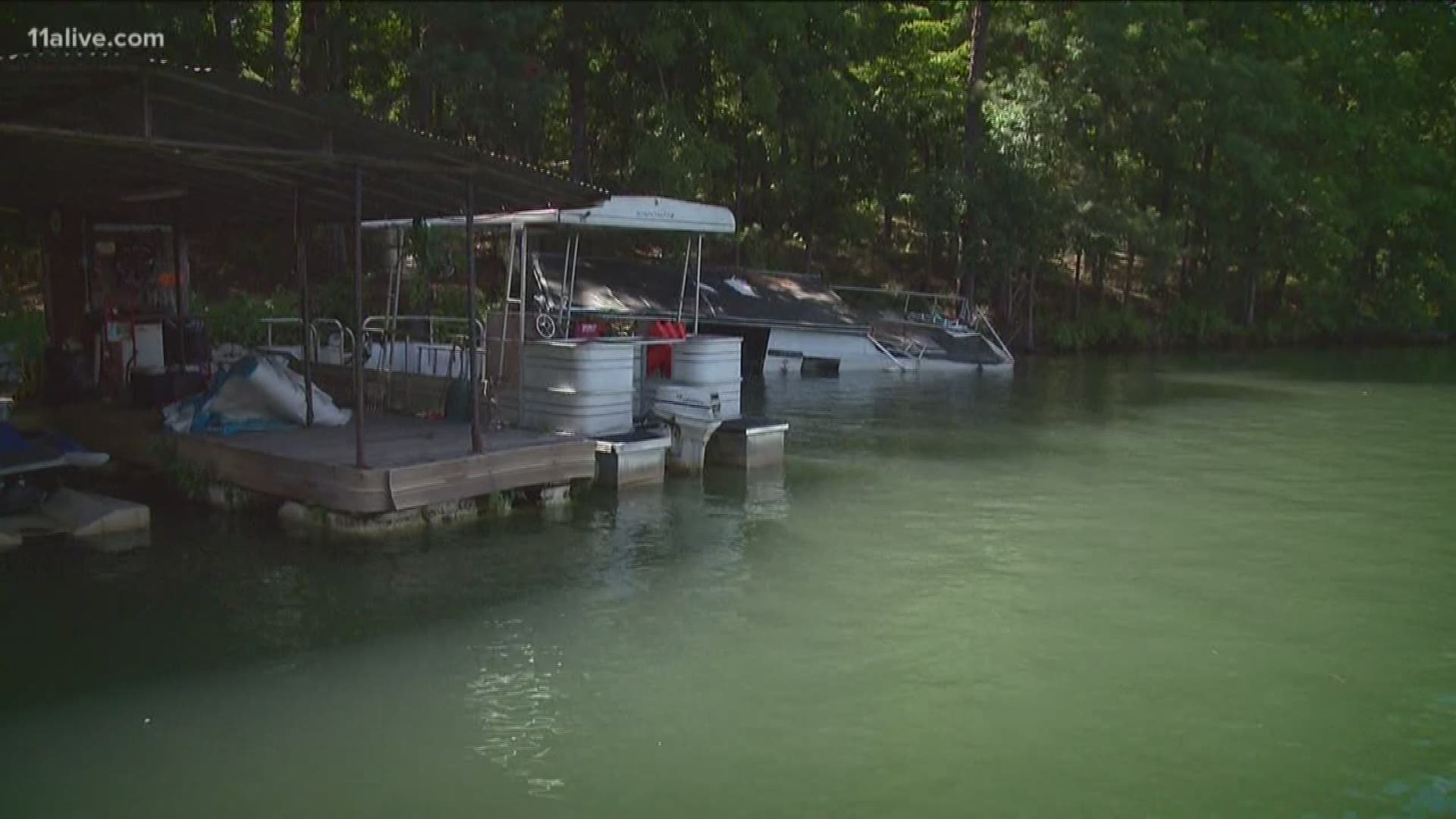 GAINESVILLE, Ga. — They come in the form of half sunken, abandoned boats and docks. Huge pieces of metal or jagged wood break off the vessels and float into the main waterways. They pose a danger to tubers, skiers and swimmers who may not see the hazards until too late.

The stories behind these sunken boats and broken docks are familiar to the Lake Lanier Association, who has been battling the problem for years. Barker took 11Alive News on a tour of a nice quiet cove bordered by homes, which is now marred by a half sunken houseboat.

“(The neighbors) said they just came in one day and it had showed up,” explains Barker. “Week later it was still there and it was starting to go down. Sinking into the water.”

The woman that owns the boat had only had it a short time. She got it cheap from a guy who was tired of it. Little did she know, the steel-hulled 1950’s houseboat was on its last leg. Now, part of it is resting on the lake bottom.

“She doesn’t have the means - financial and otherwise - to deal with it and dispose of it properly or fix it,” says Barker.

That’s where the Lake Lanier Association comes in. With funds from the state and counties, they target the most egregious cases and work with the Deptartment of Natural Resources to remove them from the lake. It’s an arduous and expensive process.

“You have to send in a crew. First, they have to float the vessel. Once they get it on top of the water they have to drain the water out of it,” explains Barker. “Then you have get it to the ramp, get in a low boy trailer, which is not a usual trailer. It has a very unique design.”

Once the boat or dock is on dry land, it has to be hauled to the metal recyclers. The recyclers don’t work for free - they are paid to strip the boat and recycle the metal. The total cost to remove a boat or dock: $10,000 - $15,000.

Sometimes the Lake Lanier Association can recoup the cost from the owner, but more often they cannot.

While the old steel-hulled houseboats are the biggest concerns, they are not the only culprits. 11Alive News toured a huge boat that sunk in Party Cove on Memorial Day weekend.

"He shows up with a pretty good load of people coming in to party at Sunset Cove," recalls Barker. "An the boat starts stinking."

That boat was just removed within the past week or two.

While the jagged metal and wood breaking free and endangering people are the most immediate concern, there are also long-term environmental issues.

“This is a water supply for 5 million people or more for the state of Georgia and it’s going into our water system,” worries Barker.

Every boat carries gas and oil, which will leak if the boat remains in the water. The neighbors who had the houseboat sinking in their cove are worried about how it will affect the big turtle who’s called their cove home for years. What those contaminants will do to the fish population is also unknown.

The Lake Lanier Association has removed at least half a dozen boats or docks in the past few years. They have several more they are targeting for removal this year. For Barker, it seems almost as soon as they clean one up another washes ashore.

“There it sits, and now we have to struggle with how to get it off.”