Delegates at the Texas Republican Convention in San Antonio added four marijuana-related items to their party platform over the weekend. Among them: decriminalization of small amounts, improving the state's CBD oil prescription program, and reclassifying the drug. 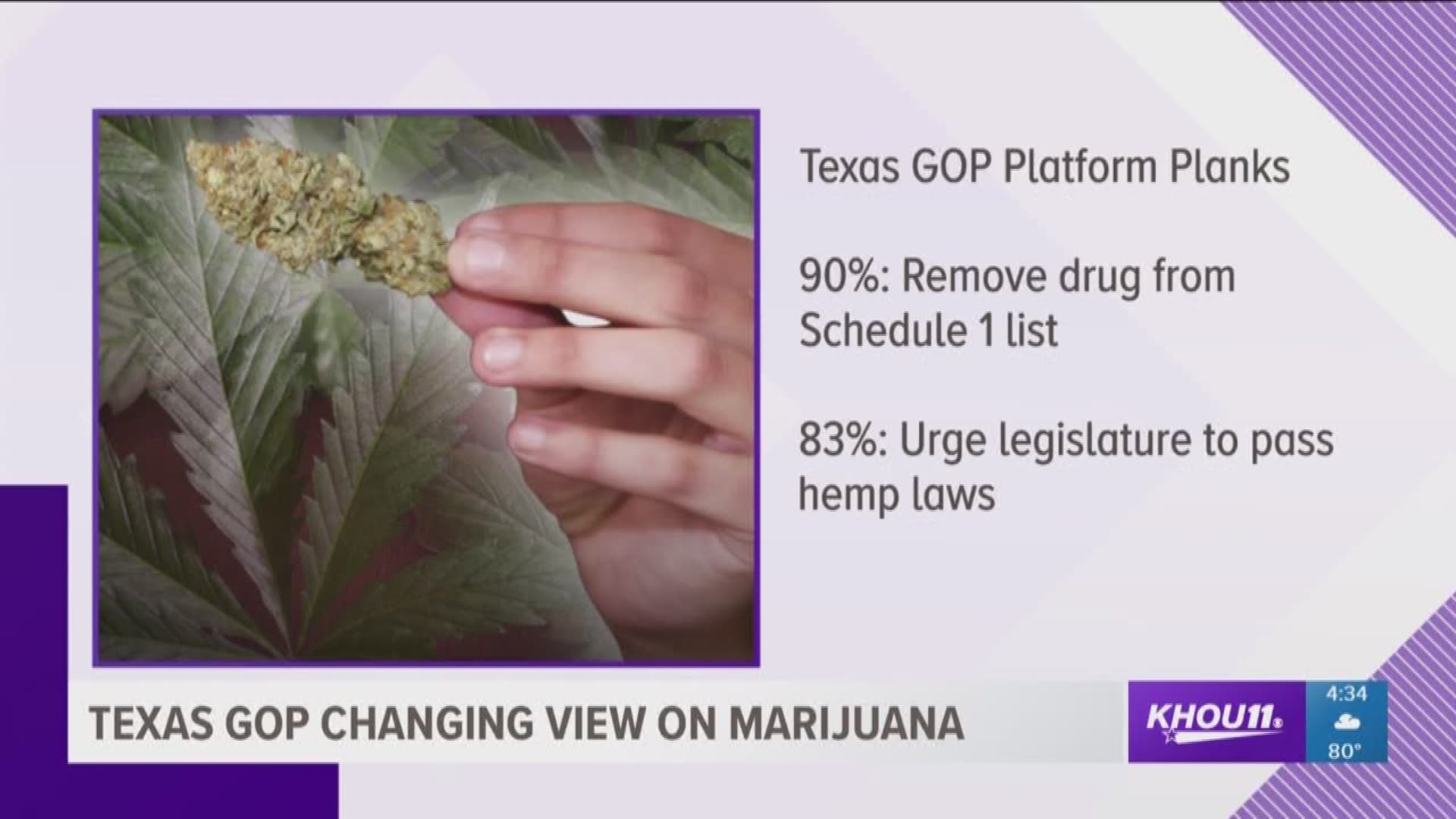 HOUSTON — Delegates at the Texas Republican Party Convention voted to put their support behind decriminalizing marijuana, one of four cannabis-related items they endorsed for their platform over the weekend in San Antonio.

Among delegates, 83 percent supported getting rid of jail time for people caught with an ounce or less of pot, 82 percent favor improving the state’s Compassionate Use Program, which allows doctors to prescribe low-THC cannabis oil to patients with severe epilepsy.

So, what are the odds state lawmakers will carry out those measures?

“Every plank we wanted got on there,” said Hunter White, Communications Director for Republicans Against Marijuana Prohibition. “I was surprised by the margins they passed by.”

White attended the convention and says he has a loved one that could benefit from cannabis. He credits changing cultural views and successful medical marijuana programs in other states, including more conservative ones, with changing minds.

“Now that the GOP and the more conservative members of the Senate see that the sky isn’t falling, we’re not talking quasi-recreational like California, I think that they will be willing to not step in the way of progress again,” said White.

In Harris County, thousands of people have already been kept out of jail through a diversion program for people caught with small amounts of marijuana. The drug is also legal in some form in 30 states and D.C.

However, recent efforts to decriminalize pot have fallen short in the Republican-controlled Texas Legislature.

“This has always been an issue of freedom,” said Vlad Davidiuk, Communications Director of the Harris County Republican Party. “It’s not surprising that the delegates made this decision.”
Davidiuk says he’s seen more and more support over the years from convention delegates and elected officials.

“I would suspect that legislators are gonna heed the will of Texans,” he said.
Bob Stein, KHOU 11 Political Analyst and Rice University political science professor, says neither Governor Abbott nor Lt. Gov. Patrick have been eager to change marijuana laws.

“I suspect we won’t see any movement on this,” said Stein.

Stein believes Texas lawmakers will be waiting to see what the federal government does and how their actions affect other states like Colorado, where legalized pot has brought in big money.

“Eventually, I think when we get a younger legislature, maybe five, ten years, we’ll see the sign of decriminalization,” said Stein.

The Texas Legislature reconvenes in January 2019.