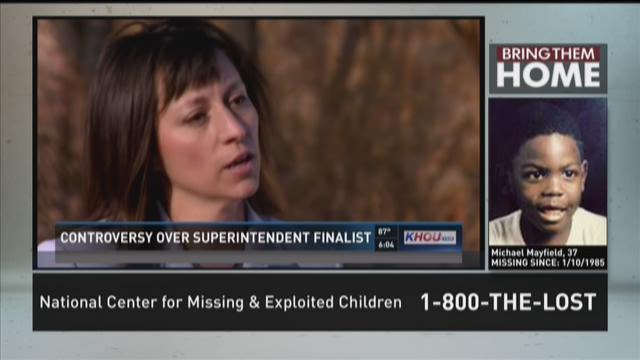 On Tuesday night, all seven trustees agreed that Dr. Elizabeth Fagen was the best choice to lead its district.

“She is the best education mind in the country,” one trustee said.

However, after doing some online research, a lot of parents aren’t so sure.

“There is a huge amount of negativity regarding this individual,” said Heather Penning, a concerned parent. “So I think as a community, we are obligated to ask questions and get our questions answered.”

For the past six years, Fagen’s been the school superintendent in Douglas County, Colorado, and her tenure has been controversial. One reason is because she pushed out the teachers union which led to the resignation of hundreds of teachers like Brian White.

“There are just a lot of unhappy teachers here that don't believe that the district is heading in a positive direction,” White told our sister station, KUSA last year.

Another controversy stemmed from that Colorado district’s attempt to implement a voucher program for private schools.

However, Fagen’s also received positive feedback. After the school shooting in Newtown, Conn., she helped implement a school marshal program that put undercover armed officers throughout the district to keep students safe.

Also, in 2011 and 2014, her district ranked third-highest in the state in math scores and fifth-highest in reading.

But Vanessa Fuentes has kids that attend Humble ISD schools and is worried about Fagen’s reputation. On Wednesday morning, Fuentes started a petition on Change.org protesting Fagen. The petition has already been signed by more than 1,500 people.

“I did some research, and we’re not really sure why she was all of a sudden elected and why we are just now hearing about it,” Fuentes explained.

Other parents mirror that sentiment and say they were kept out of the decision process by the district.

“Why did they feel so strongly about her?" asked Katana Carvaiales. "What is she going to do to improve Texas schools?”

KHOU requested information as to what her salary will be at Humble ISD, but we are still waiting to hear back.

The parents who signed the petition are demanding a meeting with Humble ISD trustees to get their concerns and questions addressed.

Humble ISD provided this statement regarding its decision:

“Last night, we had the privilege of introducing Dr. Elizabeth Fagen as the Finalist for Humble ISD Superintendent. We want to share additional information about the process the School Board and Search Firm used to thoroughly vet and get to know Dr. Fagen.

Our nationwide search for the next superintendent involved the following steps:

Our School Board partnered with Hazard, Young, Attea and Associates, a superintendent search firm that has led more than 1,000 searches in 38 states, to attract and identify the most qualified candidates. The search firm conducted an extensive background check on every candidate recommended to the Board for consideration.

From 43 applicants, seven were selected for Round One interviews. Round One interviews consisted of a two-hour session with each of the seven candidates as well as individual research conducted by our school board. In addition, each Board member individually researched the candidates using information provided by the search firm and public sources. Three finalists were invited back to participate in Round Two interviews, which involved a three-day process and 12 hours of discussion with each candidate. Dr. Fagen was identified as the potential lone finalist. Three Humble ISD School Board members then conducted a site visit to the Douglas County School District where they met with principals, teachers, district administrators, school board members, business and community members. Four Humble ISD School Board members also made phone calls to three references each.

Based upon all of the extensive research and process above, our School Board was well informed on all aspects related to Dr. Fagen’s candidacy. We are aware of the posts from Colorado on our district’s social media page last night and today. We have reviewed the posts, and we want you to know that none of the comments posted were a surprise to us, as we have done extensive research on all seven of our superintendent candidates, including Dr. Liz Fagen. We care deeply about this community and take our responsibilities to replace a wonderful leader like Dr. Sconzo very seriously.

Finally, as you know, it is the role of all school boards to represent their communities’ interests and needs well – to set policies, hire and supervise a superintendent. Therefore, we respect the right of the Douglas County Board of Education to pursue and implement policies that they feel are in the best interest of their staff and students. That said, we want to clear up any perception that our selection of Dr. Fagen implies that we are aligned or interested in the policies that the Douglas County Board has chosen to pursue.

On the contrary, we are excited to have Dr. Fagen use her skills and talents as a former high school science teacher, high school principal, and superintendent to continue to lead the work in our district; the work we have set forth. She is equally excited to engage in this partnership and to collaborate with Dr. Sconzo to continue the path of our excellent district. Context is key and it is why local control is important.

The vision of our School Board is to continue the culture and climate we all enjoy as part of the Humble ISD Family, and we could not be more excited about partnering with Dr. Fagen.”

The news of Fagen’s resignation from her Colorado post spawned this response from Voices for Public Educations, a grassroots organization made up of teachers, parents and community members:

“After years of calling for the removal of Dr. Elizabeth Fagen as the District’s superintendent, students, parents, and teachers of Douglas County are celebrating the departure of the state's most controversial school district leader. Community members have long attributed the district's hostile environment to Dr. Fagen and her divisive methods for implementing policies set by the elected school board.

Frustrated that their concerns have been largely ignored by the school board, parents responded with a spontaneous social media campaign started in May 2013 using the hash tag #FireFagen a petition asking for Dr. Fagen's removal has grown to nearly 1,500 signatures.

Dr. Fagen was hired by the Douglas County Board of Education in 2010. The superintendent is hired to ensure the accomplishment of the Board of Education's goals and vision for the District. These policies have resulted in a marked increase in teacher turnover, multiple lawsuits for an unconstitutional voucher program, and a flawed pay for performance system.

While we are pleased the school board has responded to the community's call to remove Dr. Fagen, we are more resolved than ever to reclaim our schools from the board's failed education agenda led by President Meghann Silverthorn and Vice-President Judith Reynolds. Directors Silverthorn and Reynolds are unfit to represent the Douglas County School District, as evidenced by their recent treatment of high school student Grace Davis during a private meeting where they unsuccessfully attempted to dissuade Ms. Davis from holding a student protest criticizing the board's anti-teacher policies. Ms. Davis' parents were not notified in advance that their daughter would be interrogated for 90 minutes by the directors. Ms. Reynold's unethical behavior led to her suspension and subsequent resignation from a volunteer position with the Girl Scouts. Both are currently under a third-party investigation regarding this matter; results of the investigation are scheduled to be released at the June 21 board meeting.

Amy DeValk, co-founder of Voices for Public Education (Voices), questions why the District would hold itself to a lower standard than the Girl Scouts of Colorado. “It is clear the Girl Scouts, a respected national organization, took the complaints against Reynolds seriously when they suspended her from volunteer activities, from which she later resigned. Why hasn’t the District taken any action to protect the students of Douglas County School District? Their threatening behavior towards Ms. Davis is indefensible, and any result of the investigation that does not call for the immediate resignation of Directors Silverthorn and Reynolds will be seen by parents as invalid. We will not allow this to be swept under the rug.

Stefanie Fuhr, co-founder of Voices wants the people who are truly responsible for conditions in the district to be held accountable. “We recognize that Dr. Fagen was only a symptom of a larger problem. With Dr. Fagen's removal, our community can now get back to the business of supporting Ms. Davis and every other student in the district. Regardless of the outcome of the investigation, Directors Silverthorn and Reynolds must resign from the board immediately so our community can heal and focus on what matters most for kids.