Hundreds of vehicles parked at the church, which has a large Black Lives Matter matter banner on its building. The event's organizer later apologized. 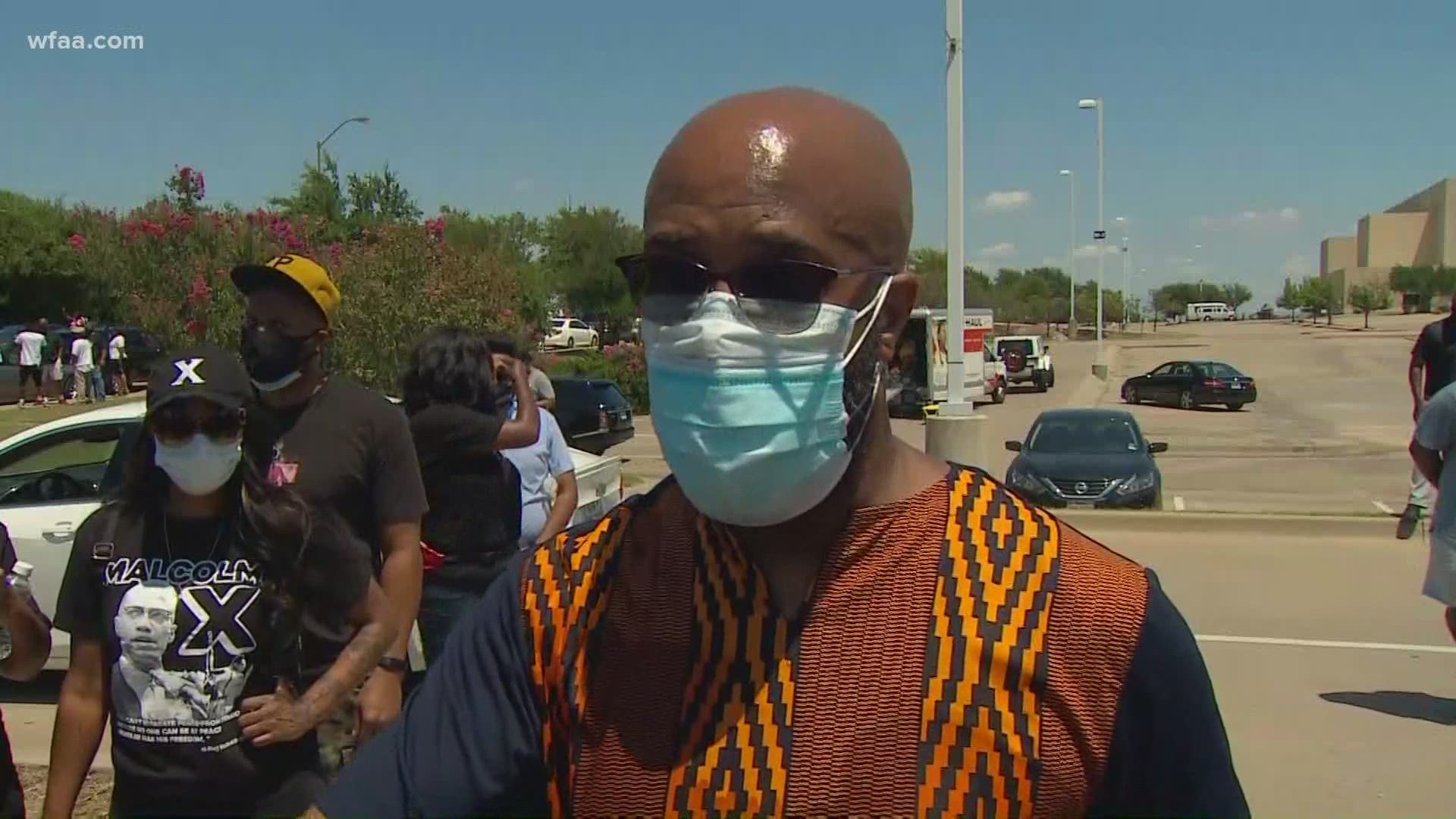 Updated at 9:27 p.m. with new quotes from "Back the Blue" event organizer Nathan Abrams.

A controversy developed Sunday afternoon at Friendship-West Baptist Church as a "Back the Blue" group made a rest stop at the church's parking lot.

The church is known in the community for promoting social justice and currently has a large Black Lives Matter banner displayed on the building.

Five auto clubs and ten bike clubs were participating in the cruise Sunday, which appeared to make a stop at the church as the group took a 127-mile route across the Dallas-Fort Worth area. Around 1,000 vehicles participated in the drive, police said.

A Facebook Live from the church's page appears to show participants of the drive filling up the parking lot. In the video, a person can be heard saying the church did not approve of such a use of its parking lot.

"Friendship-West Family & Friends some of you may have been made aware of a Blue Lives Matter rally happening on our church grounds," the church also posted to its Facebook page. "Please note that this is not the church and our pastor is working to handle the matter immediately! Please be in prayer!"

State Sen. Royce West, Dallas County Commissioner John Wiley Price and senior pastor of Friendship-West Frederick Haynes III arrived at the church in response, along with a large group of supporters of the church.

Pastor of Concord Church Bryan Carter also showed up to the scene.

Dallas police said that they had plainclothes intelligence officers in the church parking lot Sunday morning at 11:50 a.m. to monitor the Back the Blue Cruise, which consisted of people in the Texas Ram Club and North Texas Jeep clubs. Police said Back the Blue organizers said church organizers gave the group their permission to use the parking lot as a rest stop.

Church officials said that is not the case.

Haynes released a two-part statement from the church's Twitter account Sunday. He said that church representatives said they were not told there would be a Back the Blue rally on the church's campus Sunday.

A separate Black Lives Matter rally was approved for 4 p.m. Sunday on the church's campus, which was held and completed Sunday. Haynes said nobody asked for a permit to use the church for a Back the Blue rally at all.

"The mess that went down this morning was an act of intimidation," Haynes said.

He says there, in fact was a #BlackLivesMatter event scheduled at the church that took place this afternoon (around 4ish o'clock). pic.twitter.com/KzuCLZeMHs

Police said event organizers had reached out to the Dallas Police Department to obtain a First Amendment Right permit to have a police escort for their caravan.

Police said they denied that request since it is not department policy.

The amount of traffic caused congestion in the church's parking lot, since there is only one way in and out of the parking lot.

Uniformed police were called to the church to clear traffic, and they did so until the group left around 1 p.m.

"At no time, did Dallas officers provide escorts during this incident," police said.

Haynes said that some of the people in the Back the Blue rally were displaying Confederate flags and Trump flags.

"That ain't welcome on the campus of Friendship-West. We have a big 'Black Lives Matter' sign and our ministry and mission reflects that. You are not going to come to Oak Cliff and intimidate us," he said in a recorded video posted to the church's Twitter account.

Haynes went on to call for divestment from the police and called for police departments to invest in their communities.

"Now is the time to divest from policing and to invest in communities. You want your lives to matter, blue? Then that's what you do, you invest in our community instead of trying to intimidate our community, because we ain't the ones to be intimidated."

After the incident happened, Next Generation Action Network held a rally at 6 p.m. Sunday night at Dallas police headquarters to "stand with Friendship-West," according to a Facebook post.

The "Back the Blue" event organizers were apologetic when WFAA talked to them Sunday, saying that they asked participants to not bring flags of any kind. They said their whole intent was to show support for law enforcement.

“It’s not about division, it’s not about anything other than coming together as one,” organizer Nathan Abrams said. “I specifically told our attendees that this event is solely and only for our brothers and sisters in blue, and to support them.”

Abrams said they did not mean any harm when they stopped at Friendship-West. They said it was just a convenient pit stop on a long ride around D-FW.

Leaders from the church and the Blue Lives Matter rally both acknowledge that there were several political flags and at least one Confederate flag.

Abrams said the event grew larger than they expected and outsiders brought those flags to the rally. He remained apologetic.

“I want to personally say to the members of that church and the pastor that I’m sorry that there was conflict,” Abrams said. “That was not my heart, that is not what I’m about.”