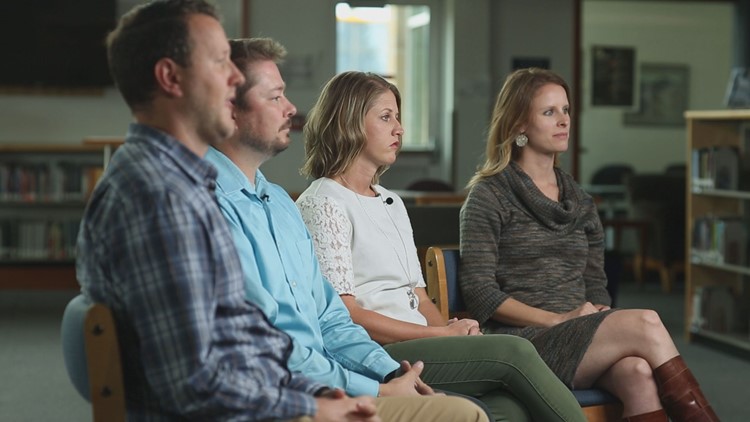 DENVER — Three teachers and a counselor at Columbine High School who were students there during the shooting 20 years ago said the experience shaped their adult lives — and professions.

All four got out safely, as did their brothers and sisters. But they were still victims.

They remember how their teachers reacted when the shooting started: how they helped students escape and shielded them from potential harm.

They appreciate how those teachers made them feel safe.

They realize how those teachers taught them not only important lessons in school, but also in life.

That's why all of them decided to become educators.

Now in class, they share their Columbine experience as students with their current students.

These days, their students weren’t even born yet when it happened.

But their students are curious, so they talk honestly about it.

All their stories from 20 years ago are similar, all are emotional, and all are sad.

Martin was a freshman, and he said it was all a normal day until the fire alarm went off.

“I thought it was either an alarm or a senior prank,” he said.

Welsh said he thought it was an actual fire, especially after another teacher busted into the room and told them they had to get out.

“The story started to escalate in severity,” Welsh said. “First it was somebody brought a gun that accidentally went off, then somebody else said somebody had a gun and they used it very deliberately, then somebody said it was an automatic weapon. It just kept getting worse, and worse and worse.”

Sudano, like most of the students, eventually ended up seeking shelter in a home in the area — a friend’s house.

Other students ended up in strangers’ homes.

Sudano said they called their parents and tried to watch TV to find out what was really going on.

After hours went by, she finally got with her dad, who was picking her up.

“Years later he told me when he was driving to come get me, he was listening to NPR. And the thing that stood out to him was a line that ‘the unthinkable has just happened at Columbine High School,’” Sudano said. “He pushed on the gas a little bit harder when he heard that."

Cooke had a unique experience. She really didn’t know what was going on and didn’t think it was that big of a deal. She too ended up at a house nearby, and eventually was picked up by her dad. She said he hugged her so tight she couldn’t breathe. She didn’t realize the anguish he was going through. She didn’t think anything of it.

“Years later, years later, I went to both my parents and said I was sorry,” Cooke said. “I’m sorry about the way I acted because now I get it. Now I get it. It didn’t affect me as much as it has until I became a parent.”

It’s been 20 years since the “unthinkable” happened.

Now those students are adults, teachers, counselors and parents.

Welsh summed up how they feel now and why they all do what they do.

“I had a lot of time to process what my teachers meant to me before the incident, certainly during it and most particularly after it,” Welsh said. “And I realized how stalwart they were and the leadership we got and the protection we got. The guidance from Principal DeAngelis and everyone else. I just couldn’t imagine entering into another profession and having done so utilizing that profession anywhere else than Columbine High School.”

Editor's note: Gary was an anchor at 9NEWS on that day. He recalls his own experience below.

It’s been almost 20 years since Columbine, and I’ve been thinking a lot about that day.

Kyle Dyer and I went on the air when we first heard something may be going on.

Over the next five hours as the horror unfolded, we did our best to report it in a calm, accurate and hopefully helpful way.

It was probably the most difficult story I’ve ever covered, because we purposefully bottled our emotions inside.

Later they came out.

Relief that we were off the air, profound sadness at what had transpired, helplessness in knowing we were helpless, and anger that this had happened.

It was a day I will never forget.

But as difficult as it was for me, it was nothing compared to the families of the 12 students and 1 teacher who were killed.

It was nothing like what the first responders, the police and sheriff’s officers, firefighters, paramedics and so many others experienced.

And it was nothing compared to what the other students, teachers and staff members and what they went through.