The missing worker was identified as 44-year-old Timothy Morrison of Katy, Texas. 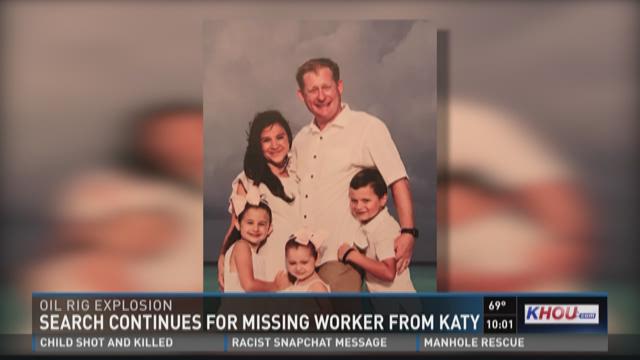 The Coast Guard suspended its search Monday evening for a missing employee after an explosion at a natural gas platform in Lake Pontchartrain.

“The decision to suspend a search is never an easy one,” said Cmdr. Zac Ford. “We send our thoughts and prayers to the Morrison family and all those affected by this incident.”

The missing worker was identified as 44-year-old Timothy Morrison of Katy, Texas.

His family released the following statement:

"We remain hopeful that their search efforts will result in the rescue of our beloved father, husband, brother, and friend. We are very grateful for the efforts of law enforcement and for your well wishes and prayers. We request privacy during this difficult time."

According to the Jefferson Parish Sheriff's Office, eight people were aboard the platform at the time of the explosion around 8 p.m. Sunday. Seven people were rescued and rushed to area hospitals Sunday night. As of Monday morning, the Coast Guard was conducting a search and rescue operation for the last missing worker.

Clovelly Oil Company said that three of the injured workers are company employees and that five of the victims, including the missing man, are contract workers.

The seven victims that have been rescued from the scene so far are:

Spokesman Tim O'Leary said the platform is a collection point for oil and gas from several wells. A statement from the company said a natural gas well was feeding the tank at the time of the explosion, which occurred during maintenance. The statement said the company's three oil wells were shut in at the time, and the flow from the gas well was cut off after the explosion.

A fire on the platform that continued to burn overnight, went out just before noon Monday. The Coast Guard said there was no sign of pollution in the lake.

Several residents in Kenner told our sister station WWL-TV that they heard a loud boom that caused their homes to shake Sunday night following the explosion. Authorities say there have been no reports of building damage on shore.

Lopinto said the platform is a natural gas storage location that feeds from other nearby rigs. The platform is located in shallow water about a mile and a half from the Kenner boat launch.

Patrick Courreges at the Department of Natural Resources said the platform is a production platform called a co-mingling facility where Clovelly draws oil from several different oil fields. Clovelly said it wasn't sure if any oil had been released into Lake Pontchartrain.

Lopinto said there does not appear to be an environmental impact.

Jefferson Parish President Mike Yenni said the parish's drinking water was not affected by the incident because the water is drawn from the Mississippi River.