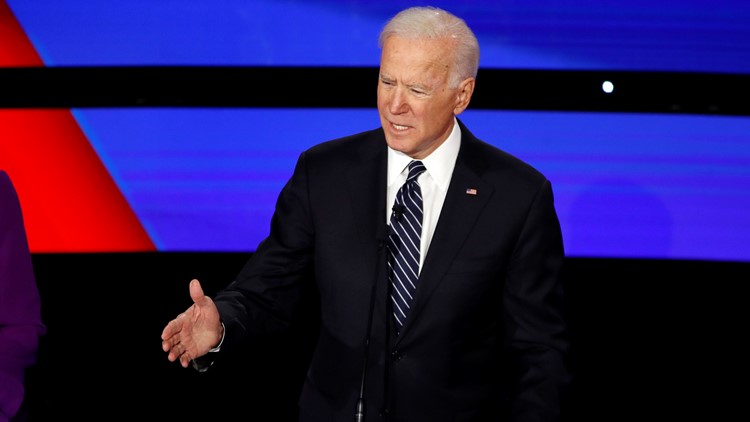 Biden made it clear Texas will play a pivotal role in this primary and ultimately in a possible general election during a fundraiser in Houston.
Author: Marcelino Benito (KHOU)
Published: 8:59 PM CST January 16, 2020
Updated: 5:23 AM CST January 17, 2020

HOUSTON — Fresh off the final Democratic presidential debate before the Iowa Caucus, former Vice President Joe Biden made a stop in Houston for two fundraisers.

The first event was hosted in River Oaks at the home of Ellen and Steve Susman. Other hosts were Carrin Patman, Jim Derrick, John Eddie and Sheridan Williams.

Biden made it clear Texas will play a pivotal role in this primary and ultimately in a possible general election.

"I've been spending a fair amount of time in Texas," Biden told supporters. "We, you all, and I hope I can be helpful can win back the state of Texas, the legislature and senator."

Biden spoke to a crowd of about 130 donors and supporters. His remarks lasted just under half an hour.

"The next president is going to have to be able to not only be a fighter, but a healer," Biden said. "They say I don't know much about this Republican party, but look, they've gone after my only surviving son with lies, they've gone after me in ways that I don't think anybody's seen in a long, long time, and I understand them. But it's not about my family. It's about you. It's about the American people. It's about understanding we got to move on. We have to heal the country."

Biden told supporters he's the best candidate prepared to fight, heal and lead on day one.

"This election requires somebody who on day 1 can stand behind the podium on Jan. 21, 2021 and command the respect of the world," Biden said. "I've met every single world leader in the last 45 years. I know them by their first names and they know me."

The former vice president mingled with supporters and snapped selfies before heading to a second fundraiser in Spring. Mayor Sylvester Turner was in attendance.

Biden addressed racism and inequality in front of a largely African American group of supporters.

“This is a man [Trump] who talks about African Americans with such disrespect it’s disgusting," Biden said. "But we’re at an inflection point, we’re at a place where the American people have been awakened.”

The former Vice President told supporters this is an inflection point in American history.

“I thought you could defeat hate, but it only hides and then came along 2017 and this President of the United States when asked the night that young woman was killed, he said I think there were fine people on both sides, folks hate doesn’t go away it just hides," said Biden. "When it’s given oxygen it comes out, and nobody knows it more than this community.”

The Texas Primary is set for March 3.