Greater Houston drivers should be prepared to see an increase in car insurance -- one of the many ongoing impacts of Hurricane Harvey. 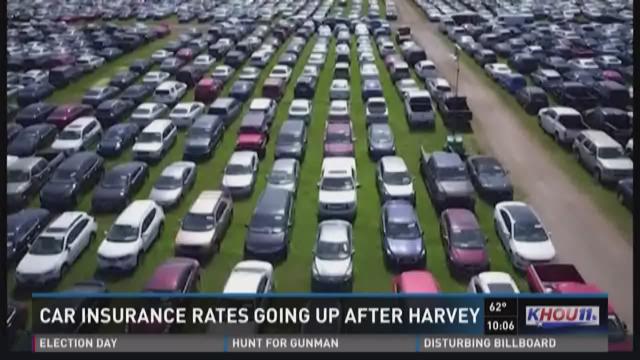 Greater Houston drivers should be prepared to see an increase in car insurance -- one of the many ongoing impacts of Hurricane Harvey.

It’s estimated that up to 500,000 vehicles flooded during Harvey.

Conroe residents Arielle and Stephen Darbonne were lucky their vehicles stayed dry, which is why they were surprised by their latest statement from Travelers Insurance.

“We received a letter stating that our insurance rates were going up,” Stephen Darbonne said.

So they called Travelers and spoke with an agent.

“She immediately started with, ‘There has been an 8 percent increase across the board,’” Arielle Darbonne said. “’It's not just you. It's everybody in Houston because of Hurricane Harvey.' It feels kind of like a slap in the face to all these people.”

Travelers didn’t confirm the 8 percent hike, but they did release this statement:

“While losses from severe weather events do affect insurance rates, costs are based on a number of factors, including the unique set of risks facing the individual and the amount of limits they decide to purchase. Trends like more drivers on the road, new car technology that’s more expensive to repair, and the rising cost of medical care may also affect rates. Consumers can shop for the best price and may qualify for discounts related to safe driving, good grades, home ownership, and hybrid and electric cars, among others.”

Jerry Hagins is the spokesperson for the Texas Department of Insurance, an agency that regulates the business of insurance in Texas and said that Houstonians are probably seeing increases in their premiums.

“Insurance companies base their rates on the losses that they experience in a year and then they average those in overtime,” Hagins said. “Hurricane Harvey caused immense flooding in the Houston area and insurance companies saw a lot of claims from people.”

The major factors that determine an overall comprehensive rate hike are medical costs, vehicle technology that can make even a fender-bender expensive to fix, and natural disasters.

Drivers may want to keep an eye on their statements over the next several months because, as the Darbonnes have learned, it’s not just flood victims feeling Harvey’s ripple effect.

“We are shopping around,” Stephen Darbonne said. “We just think it's not right.”

Hagins agrees that comparing prices is exactly what drivers should do.

“Just because one company increases its rates doesn't mean they all do. It's worth shopping around," he said.

Hagins recommends a free website though his agency called www.helpinsure.com. It’s a shopping tool for both car and home insurance that provides sample rates from all the top companies in the area. There are also ways in which drivers can get discounts from their providers including taking a defensive driving course or a driver’s education course. Insurance providers will be able to relay that information to its customers.