Police said she had attempted to move a barricade in Buckhead at the height of looting incidents that night. Her attorneys say she was brutalized while protesting. 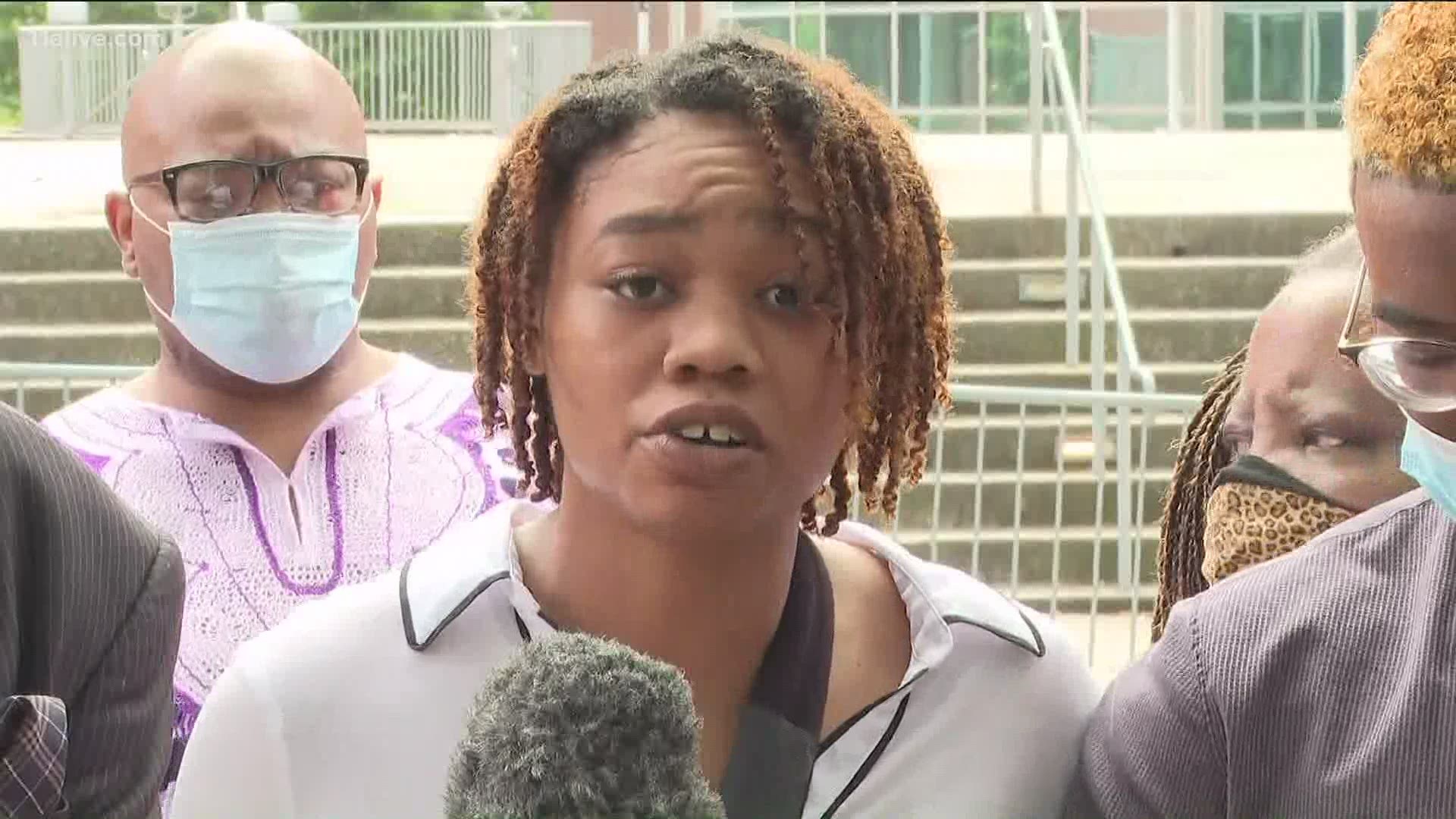 ATLANTA — A black dental hygienist says she suffered a broken collarbone after being slammed to the ground during her arrest in Buckhead a week earlier.

During a Friday afternoon press conference held by her attorney, the hygienist, Amber Jackson, said she had finished protesting and was leaving Lenox Square when the altercation occurred.

She said that the Atlanta police officer slammed her to the ground leaving her with broken bones as a result.

"The police then comes in and slams me, yanks me out of the car, and slams me down," Jackson said. "My shoulder is broken. My clavicle is fractured."

Atlanta Police confirmed that on the same early morning when they were dealing with widespread looting and property damage in Buckhead, one of their officers stopped a car where a woman was trying to remove a barricade. But police said the woman refused orders to exit the vehicle.

"He attempted to get her out of the car and the two struggled," police said in a written statement. "During her effort, to resist the arrest, the officer had to force her to the ground to get her in handcuffs."

Video shared online of that night showed the woman, later identified as Amber Jackson, being thrown to the ground.

Since the incident, the officer has been placed on administrative assignment and police said his actions are being investigated by the Department's Office of Professional Standards to determine if he violated any department procedures.

Police have since released the body camera video which shows most of the confrontation and the struggle and the moment the woman was placed in the back of a police car.

"Our young people who are courageously and correctly demanding an end to police brutality are being brutalized in the street where it is their right to protest. We need a change in police culture." Davis said in a written statement.

Davis joined his client as did community activist Derrick Boazman in calling the incident a case of police brutality. Boazman directly spoke on the video that showed the incident.

"I hope you look at it," he said. "Because they're literally dragging this girl all over the place and throwing her down like a piece of trash."

Boazman added that her injury has also left her unable to work in her job as a dental hygienist, adding that costs of surgery have only exacerbated the situation.

"As a community, we have to help Amber get the surgery that she needs," he said. "She was there to fight for justice and now we have to fight for her. She can't work so we will do a fundraiser for her surgery and recovery."

The incident happened just days before a violent arrest in Atlanta where two college students were tased and detained by police. The incident, which was also captured on video, led to the firing of multiple officers as well as charges from the Fulton County District Attorney's Office.

Boazman also spoke on this incident and said that the six officers involved in that arrest also had excessive force allegations against them previously.

"So, when you don't deal with the bully in the schoolyard, what does the bully do? He continues to beat people up," he said. "And we're saying very clearly, our young people are not here for you to beat on."

Brees responds to Trump: 'We can no longer use the flag to turn people away'

FBI searching for teen with autism, other conditions missing for days