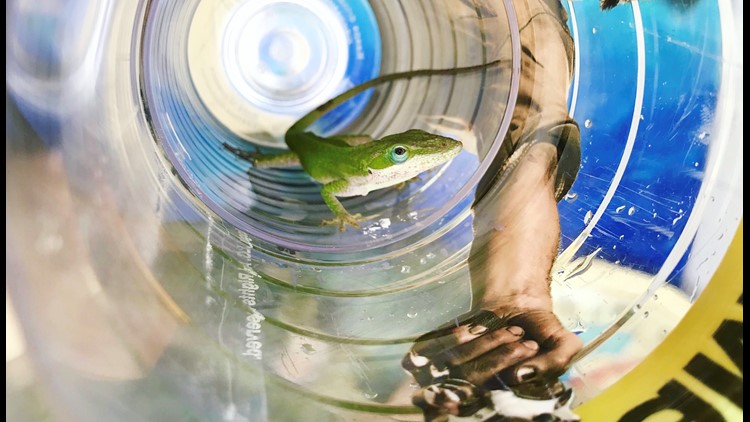 Photo by: Brooks Garner
I caught this little guy in my kitchen. -Brooks

Brooks's Blog: How to Catch a Dragon

HOUSTON — With May arriving and temperatures warming up, creatures large and small are on the move. The anole lizard is a common species of reptile around Houston, found in just about every suburban backyard. With highs approaching 90° late this week, the chameleons are running around everywhere. They can change from brown to green (not to be confused with the, "Brown Anole", an invasive species native to Cuba and the Bahamas introduced primarily by pet stores and owner-releases) which does not change color to green, but instead to a darker brown or black color. But, all live here and all are on the move! This means you may find them in your house, especially if you've left the door open to bring groceries in or let the dog out. Now... if you ignore them like you might a wayward housefly, they'll eventually die of dehydration and because they're not insects, they'll definitely start to smell as they decompose. (Gross!) If you've ever had to endure that experience, it's no good so to quote the title of the famous Caryl Hart children's classic, here's how you, "Catch A Dragon"!

First, avoid fast movements and get a wide-mouth, clear to semi-clear cup -- so you can see it. I prefer a Tervis tumbler. Slowly, but confidently approach the lizard and place the cup over him, careful not to slam it on him because the edge of the cup could hurt the fragile lizards. Watch for their long tail (it can fall off!) and of course be careful not to get their head or body. It may take a few tries, but don't give up. Best to capture them during the first attempt because they'll not be on to you yet, and you'll have a better chance they don't try to run and hide under furniture. Once you've got them in the cup against a window, or a wall, then just slide a piece of thin cardboard (like a cereal box) or a firm piece of paper, to stop the anole from running out of your cup after you pull it away from the way. Then, tip the cup down as you would if it's filled with water, so that the cardboard becomes a, "roof". Finally, walk it outside safely from your home and gently place it onto grass or in a bush, allowing the lizard to walk out under his own power. Never, "toss" him out of the cup as you might a roach, since the impact could severely injure it. Be sure to take pictures before you release him, as I did to this little guy! Involving your children is added bonus. Have fun and watch out for those little lizards. -Meteorologist Brooks Garner