At 241,497 acres, officials said the Bootleg Fire was exhibiting “extreme fire behavior” making it too dangerous to attack. 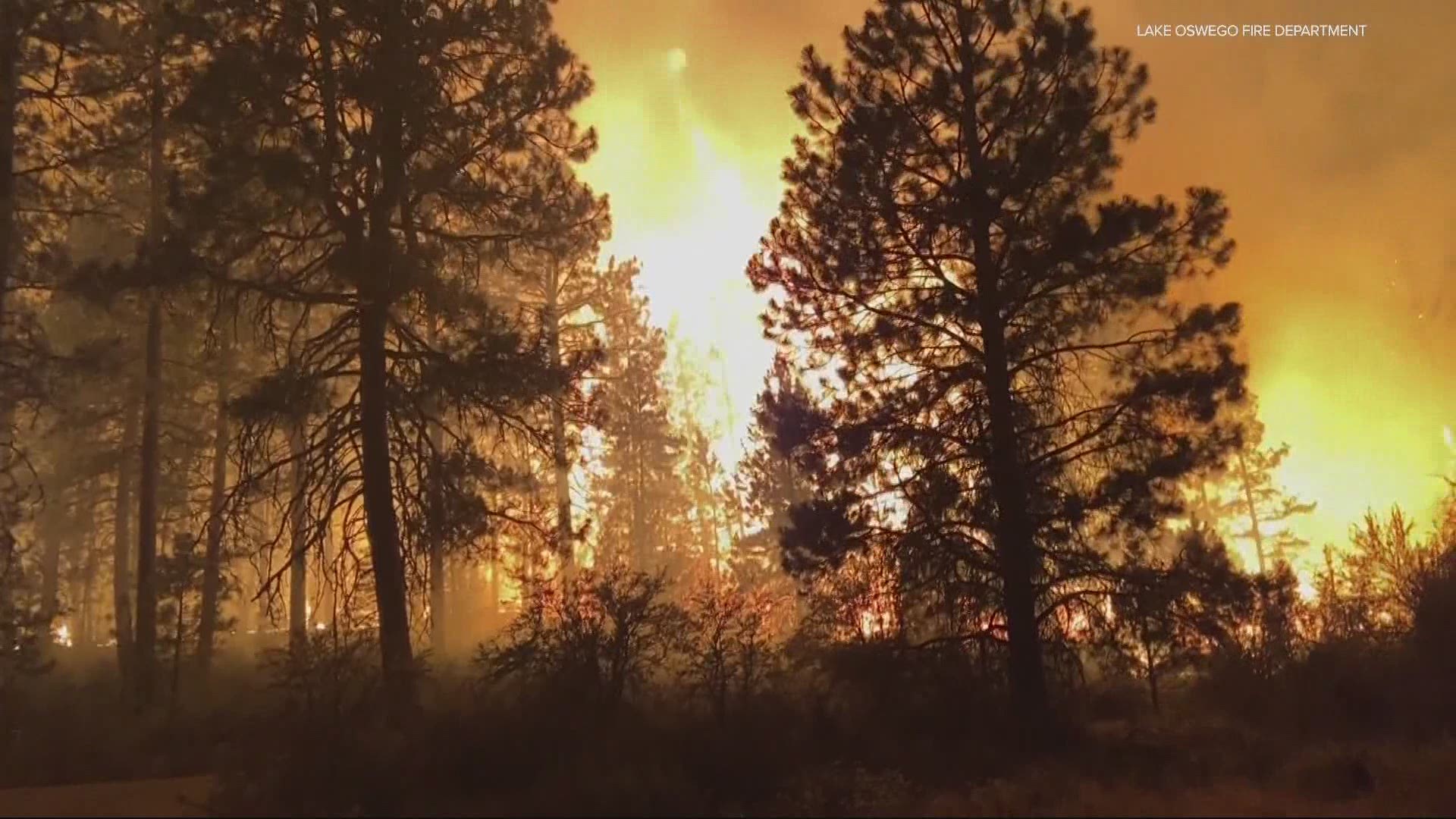 KLAMATH COUNTY, Ore. — As America’s largest wildfire raged on, firefighters retreated from portions of the fire line overnight Thursday into Friday. At 241,497 acres, officials said the Bootleg Fire was exhibiting “extreme fire behavior” making it too dangerous to attack.

“Extreme fire behavior is like a combination of circumstances that you just don't see every day,” said Marcus Kauffman, spokesman for Incident Command Team 1. “Things like crowning, when the fire consumes a whole tree and gets up into the crown of the tree.”

The fire, burning northeast of Klamath Falls in southern Oregon, is 7% contained. It’s destroyed 75 buildings, including 21 homes. Kauffman noted, past fires have exhibited extreme behavior for a day or two at the most. The Bootleg Fire has been doing so for days on end.

Lightning is the last thing evacuees want to hear about.

“The trees were exploding. There was little fire tornadoes going up,” said Tim McCarley in an interview Thursday.

McCarley told KGW he and his family evacuated their home near Bly, Ore. last week. They’ve since learned all their possessions, stored in trailers, are destroyed. Their home, which was under construction, survived. Friday, Red Cross volunteers at the Klamath County fairgrounds said the McCarley family had been given permission to return home and try and salvage their belongings.

Volunteers gave them one of their “sifter boxes."

“They're just a box that has a chicken wire attached to [the bottom of] it,” said volunteer Darrell Fuller, via Zoom Friday. “They can sift through the ashes to see if they can find jewelry or if they can find keys.”

Despite the devastation, evacuation orders being lifted in some areas is a sign of progress.

“Even though the fire continues to grow, we're pulling people off of the southern end of the fire because we're pushing those divisions into patrol status, which means that we're good with where we're at on that work,” Kauffman said. “We just kind of have the problem child over on the east side that keeps giving us fits.”

Washington firefighters arrived at the #BootlegFire today. These structural task forces were previously assigned to the #GrandviewFire. We thank you for the help!! These firefighters will join crews from Oregon and California in protecting life and structures. #OneTeam pic.twitter.com/MRZqr5Hrl8

“Obviously, the west is the canary in the coal mine in terms of climate,” she said. “Climate change is happening, our people are dying … We must take action and politics cannot get in the way.”

WATCH: Gov. Kate Brown (D-Ore.) says “politics cannot get in the way” of climate change action as her state battles wildfires brought on by extreme heat.@OregonGovBrown: “Climate change is happening, our people are dying, our forests are burning … we must take action.” pic.twitter.com/Pdzxx0SJTg