“HFD crews have been working around the clock, in a very dangerous situation to help bring closure for these families,” the Houston Fire Department said. 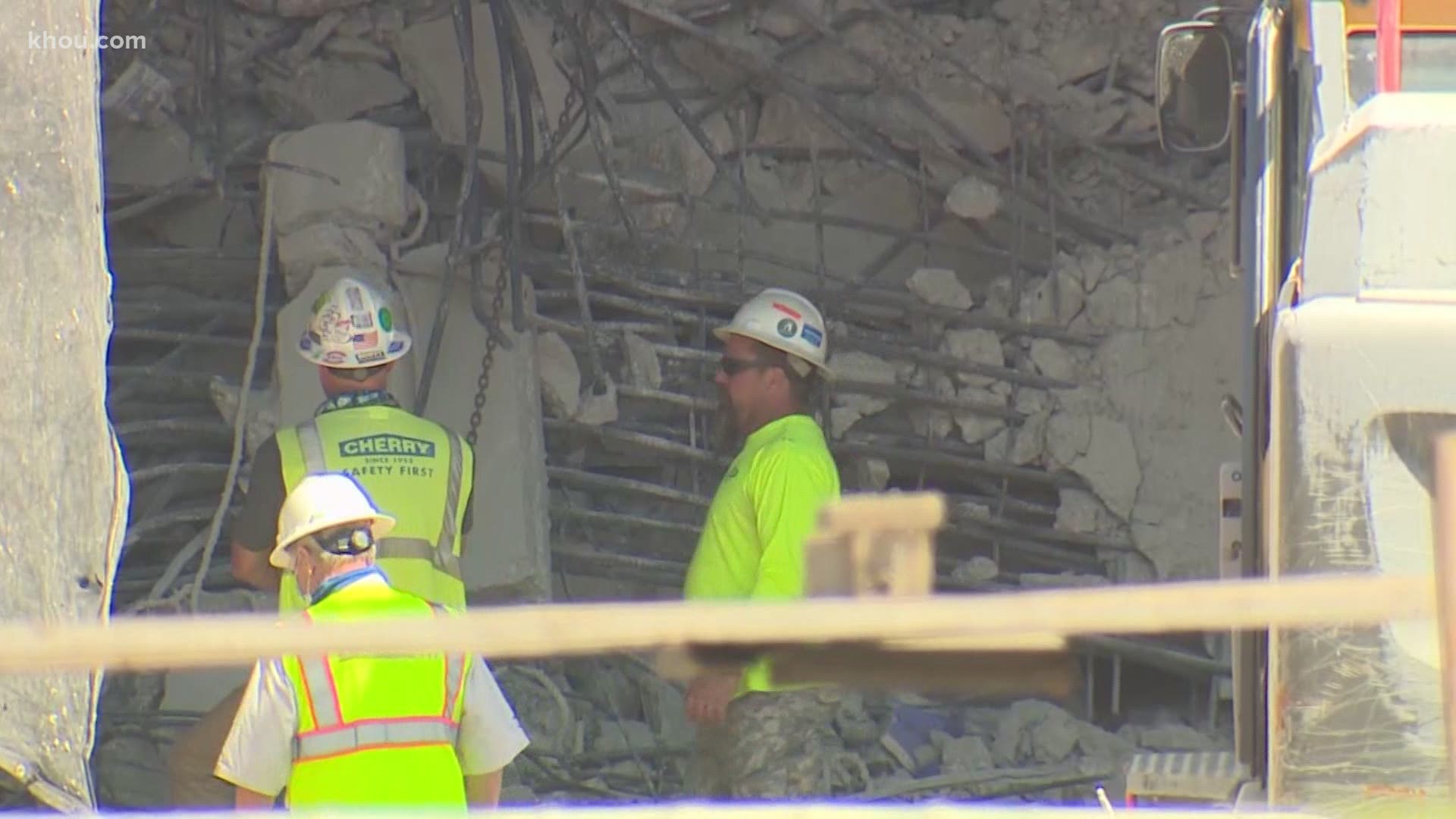 HOUSTON — Rescue crews have recovered the bodies of all three workers killed Monday when a building collapsed in west Houston.

Firefighters will continue the search to make sure there are no more victims, but it's believed all of the workers have been accounted for.

The recovery effort was challenging because of the threat of a second collapse inside the 15-story building that's under construction.

“HFD crews have been working around the clock, in a very dangerous situation to help bring closure for these families,” the Houston Fire Department said in a statement.

HFD Assistant Chief Ruy Lozano said they had to cut holes in the roof to get access to unstable planks of concrete that had to be removed. A crane removed the planks from the top down to reach the bodies on the ground floor.

The identities of the victims have not been officially released, but Houston Fire Assistant Chief Michael Mire said all the families have been notified.

Some showed up to the scene to grieve with the hopes of a miracle. Marisol Lopez wept in pain and heartache as her daughter-in-law sat next to her touching her wedding ring.

“Why did this have to happen to him? I know life is unfair, because it took him away from me this way," Lopez said.

Lopez said her son was one of the three workers killed after a stairwell collapsed during construction of the Marathon Oil building.

She had held out hope, waiting for Houston Fire to finish recovery efforts.

“I know it’s difficult for them, but it’s so much harder for me to know that he’s there, and I can’t even see him,” Lopez said. “I have the faith in God that maybe my son is alive in a little corner.”

Mire said the debris pile was three stories high. He added each section of stairs weighs about 14,000 pounds.

“As you remove layers, you’re not always sure what you’re going to encounter, so you have to just take your time, be patient, and do as much as you can to show respect to the bodies, as much as be safe for our members," Lozano said.

Lopez said her son was just 29 years old, and his main priority was to take care of his wife and three kids.

“They are waiting and asking for him. They think he’s working,” Lopez said.

Mire said construction on the building has stopped until they hand the building back over to contractors. He said the collapse was isolated to the stairwell and the rest of the building is safe.

Miguel Ramirez showed up at the scene Tuesday because he believes his best friend is one of the three victims.

“I’m looking for answers because my best friend got trapped there and we don’t know if he really is alive or dead or if he needs helps. I don’t know because they don’t tell us anything,” he said.

Ramirez said his friend is 28 years old and has a family.

“His three kids are waiting for him at home and they don’t know anything. They’re asking for him,” Ramirez said.

The names of the three workers killed have not been released but their families have been notified.

One worker was injured. The other 236 employees made it out safely.

OSHA is overseeing the investigation into the cause of the stairwell collapse.

The building at I-10 and Beltway 8 is the future home of Marathon Oil.