Doctors will harvest Ollie’s bone marrow, and in June, he’ll undergo chemotherapy and 6 weeks in isolation while doctors perform the gene replacement therapy. 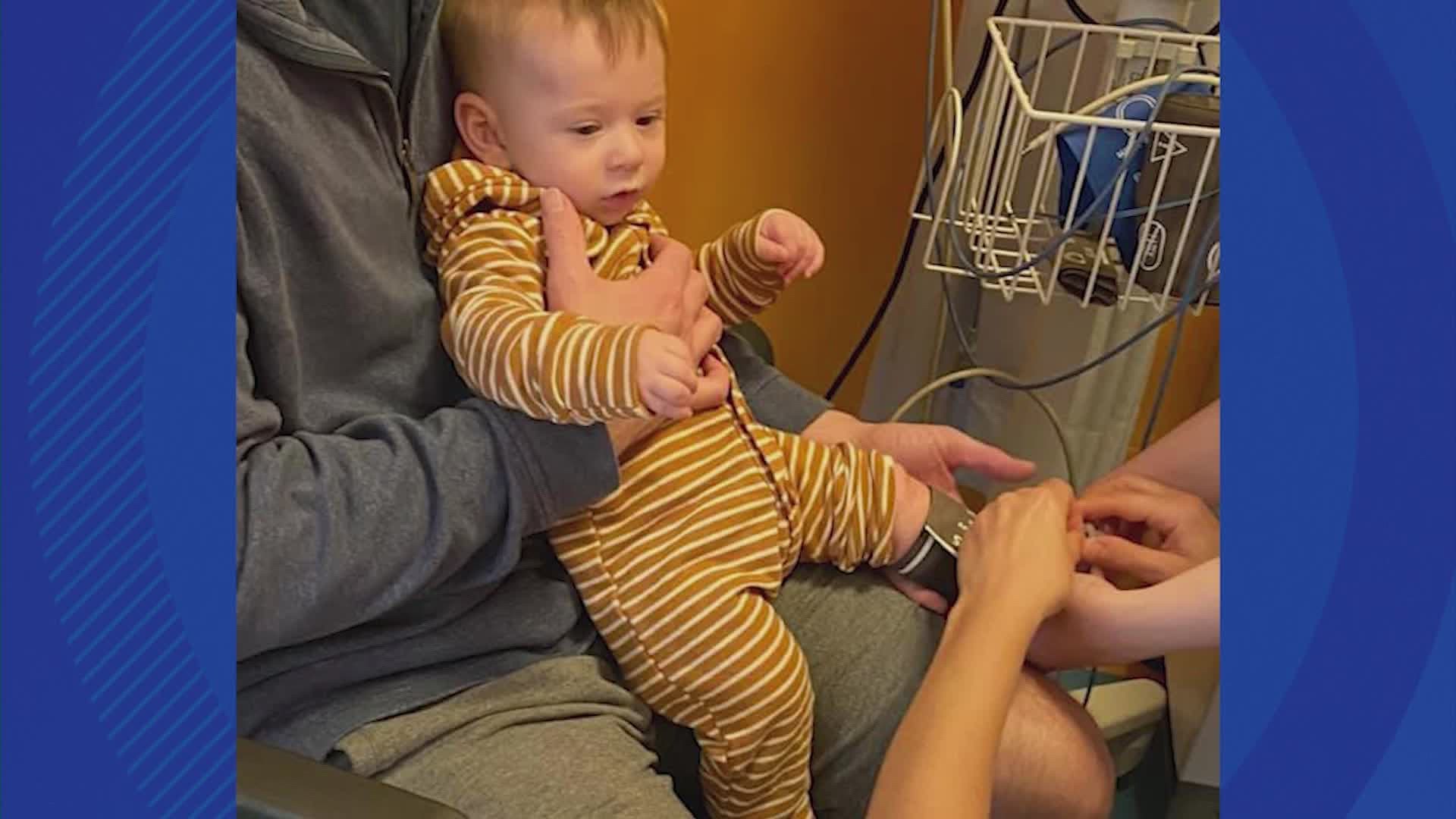 MILAN, Italy — More than 5,000 miles from Houston and half-a-million dollars in donations later, 6-month-old Ollie Rasberry and his mother, Victoria, are ready to begin Ollie’s lifesaving treatment in Milan, Italy.

In January, KHOU 11 introduced the world to this family from The Woodlands, who were desperately trying to raise enough money to pay for a new gene replacement therapy.

Ollie has MLD, a rare and fatal disease. His 5-year-old sister, Addi, has it, too. She was diagnosed as a toddler once the disease had already progressed. The family says her prognosis for survival is between 5 and 10 years.

But because of Addi, the family knew to test Ollie for the rare disease at birth. Once diagnosed at two weeks old, his doctors recommended a new, successful gene replacement therapy in Italy. The treatment is not yet approved in the U.S.

The cost of the treatment and expenses came in at $500,000. Doctors say the treatment had to start by about 6 months old, before the disease "wakes up."

The family was overwhelmed at first, unsure how they would ever raise that much money. But thanks to so many community members and strangers, including countless KHOU 11 viewers who shared their story and donated, the family raised enough money to afford it.

This week Ollie is in Milan with his mom undergoing tests with his new medical team.

“It has been a whirlwind!” said Victoria Rasberry, Ollie’s mom. “We went to the hospital, and we got to meet everybody that we’ve only talked to on Zoom.”

At the end of May, doctors will harvest Ollie’s bone marrow. Then in June, he’ll undergo chemotherapy and 6 weeks in isolation while doctors perform the gene replacement therapy.

“It’s the best thing for him, but it’s definitely...I’m nervous. Having him go through everything that he has to go through," Victoria said.

The whole experience has been a lot for this family emotionally. Victoria will not see her other children, including a very medically fragile Addi, for 5 months.

“It’s very bittersweet," Victoria said. "It’s very hard leaving her and the big kids. (Addi) knows that we were going for Ollie. The last few days, we just kind of cuddled a lot.”

Victoria brought a special toy to Italy with her: a gift from one of Addi’s nurses. It’s a pink Build-A-Bear that has Addi’s voice recorded in it. When Victoria squeezes its arm, she can hear Addi sigh, the remaining sweet little sound that Addi is able to make.

MLD has stolen Addi’s voice, along with her ability to walk, eat and breathe comfortably.

“I was a puddle when she gave that to me, I’ll be honest," Victoria said.

The hope that Ollie’s future looks different, along with the network lifting them up, is what keeps this family going.

“There is so much love and support. It definitely makes my mama heart feel very full," Victoria said.