This World Series taking quite an emotional toll on Astros fans across the city. Doctors say it’s just a game, but that stress can have real consequences. 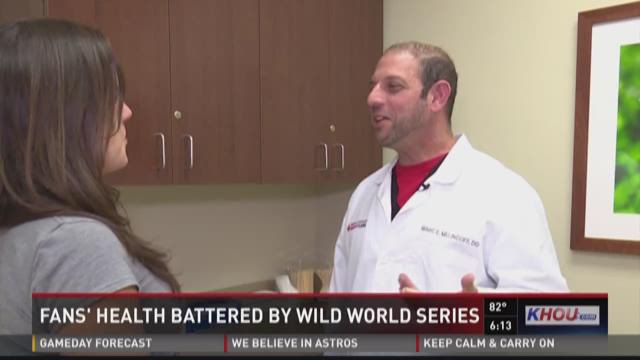 The stress has been high here in Houston over the past week. The World Series is taking quite an emotional toll on Astros fans across the city.

Doctors say it’s just a game, but that stress can have real consequences.

But sometimes those four little words are easy to forget, and riding the emotional roller coaster of this year’s world series has many people talking out the stress on social media..

But all kidding aside, Dr. Melincoff says those the ups and downs of the games could lead to some serious endings.

Especially for people who are already susceptible, like those with diabetes and high blood pressure.

“Increased stress with that and you have again, the perfect storm of a potentially fatal effect," Dr. Melincoff said.

He says even Game 7 isn’t worth risking your health or your life. So stop, take a breath and don’t let it get that far.

“It’s a non-stressor. It’s a game, but it can cause internal stress, and that can make your health even worse," Dr. Melincoff said.