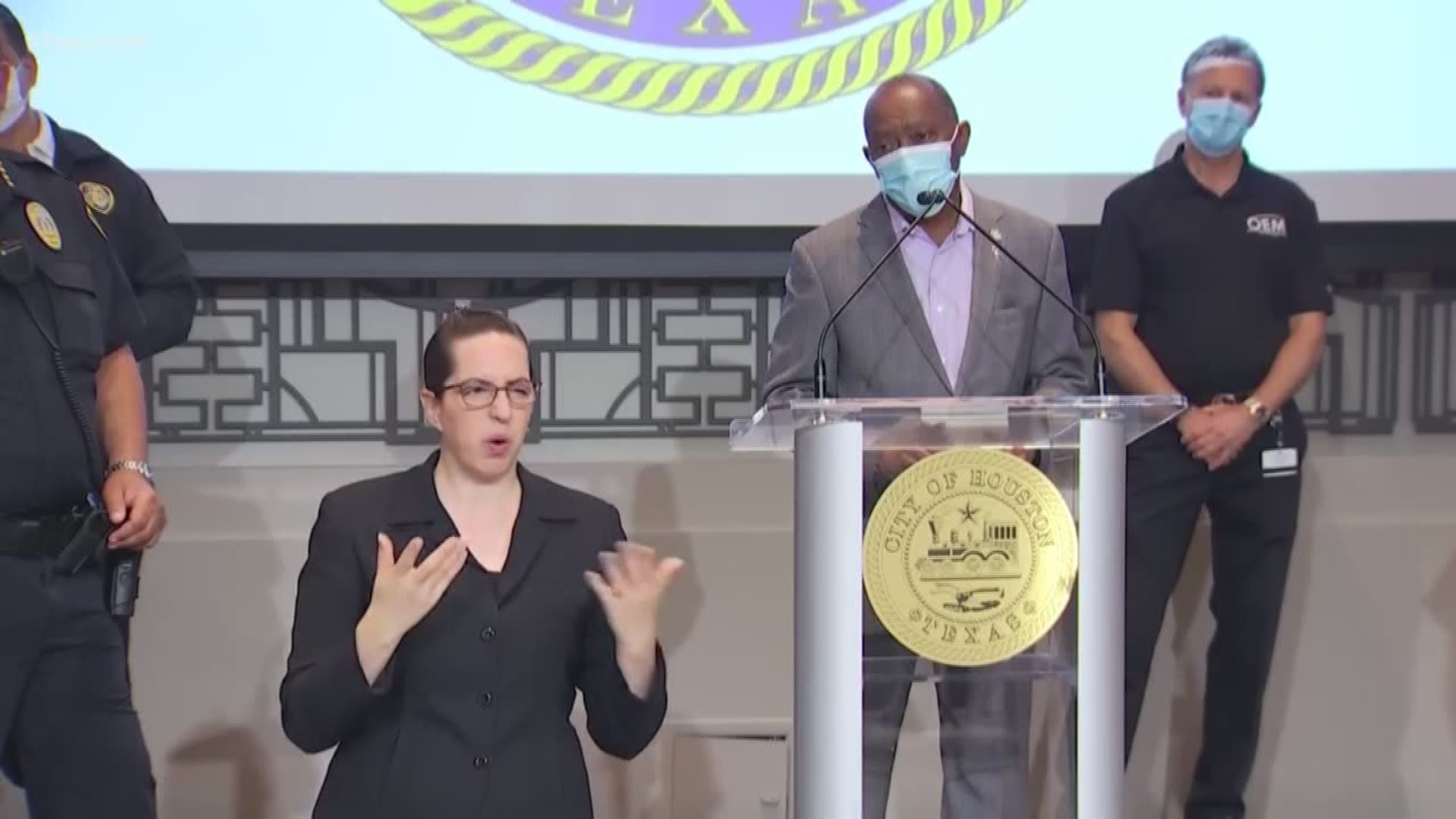 Donning a blue face mask at his daily COVID-19 news conference, Turner said he agreed with Abbott’s executive order that would slowly lift restrictions on businesses and feed the state’s economy. Those include allowing state parks to reopen, relaxing rules on medical procedures and allowing curbside and delivery options for retailers.

While the mayor said he’s cautiously optimistic of the way Houston is trending in terms of the novel coronavirus, he noted that “if we take our foot off the brake, we can easily start moving the other direction.”

“The last thing I want to do as mayor of the city of Houston is change course and cause things to peak,” he said.

In a separate news conference Friday, Harris County Judge Lina Hidalgo also urged caution, saying everyone should stay home until the county peaks in cases. She went on to say before the county can reopen, we need more and affordable testing.

“Settling into complacency would be catastrophic," she said. "Right now is precisely the worst time to put our guard down because we might be close to the maximum of cases. And we’re either going to go back up and go to where we know we shouldn’t go or may be able to make it to the other side and recover and show how it’s done, how a society makes it through this.”

Hidalgo also said that the county testing sites would now be open to anyone who has reason to believe they've been infected. She stressed, though, that it's not for people who are just curious to know if they have COVID-19 and there is still a screening process.

The county on Friday reported 40 new cases and two additional deaths.  The city of Houston also reported two deaths —both white women in their 80s with underlying health conditions—and 114 new positive cases. Together, Harris County and Houston have 4,460 total cases and 67 deaths.

When asked his plans on reopening the city, Turner still didn’t offer specific details on when that will come or what it will entail. He did mention, however, that any plans will include continued social distancing, wearing face coverings in public, and for city workers to continue working remotely through at least May.

He plans to name a leader of the city’s recovery task force on Monday, which will focus on education and resources for Houston's at-risk and vulnerable population.

“Even though everyone is anxious to open up our city and get back to business as usual, the reality is these vulnerable populations were living in the margins before this coronavirus and they’re living in the margins right now,” Turner said. “The city will continue to take necessary steps to protect the health and safety of all Houstonians and take the necessary steps to save lives.”

In order to get back to life as normal, Turner stressed the need for more testing. And not just diagnostic testing that confirms a positive or negative result, but contact tracing that helps track the virus among people.

Dr. David Persse, the city’s health authority, said with that specific testing, health leaders would be able to track the spread of the virus and isolate people and place them in quarantine before it could spread further.

“I think the misstep will be if you open (the state) up and don’t have widespread, ubiquitous testing,” Turner said.

Although other Texas cities like Austin and San Antonio have issued rules for mandatory masks in public places, Turner instead said he’ll continue strongly advising people to wear face coverings in public.

“When you say mandate, I think there’s an obligation on your part to have some things available that you cane make available to other people,” the mayor said. “I want to at least know that we have a bountiful supply to give people who may not be able to afford them.”

Turner said he was discouraged in his travels throughout the city to see people in public not wearing any face coverings.

Houston Fire Chief Sam Pena shared some good news Friday. Capt. Al Capistran was released from the hospital after a lengthy battle with COVID-19 and is home recovering.

“I just want to thank the community and everyone who offered their prayers,” Pena said.

The number of firefighters in quarantine continues to go down, Pena said. As of Friday, 62 remained in quarantine, down from over 220 from earlier this month.

Of the 29 firefighters who have tested positive for the coronavirus, 19 have returned to work.

Access to city parks will be limited this weekend control overcrowding, including access to parking lots adjacent to the parks. Parks will remain open, but Turner said “the goal is to encourage citizens to walk or bike to their neighborhood parks.” Parks with gated parking entrances will be locked Friday night and reopened Friday morning.

Turner said he planned to attend a virtual prom tonight with local high school students. “It’s a virtual prom and we’re gonna boogie down,” the mayor said with a chuckle ending his news conference. “You have to have a little humor in this day and time.”