An estimated 300,000 people packed the downtown Houston sidewalks to watch more than 250 mobile masterpieces roll by. 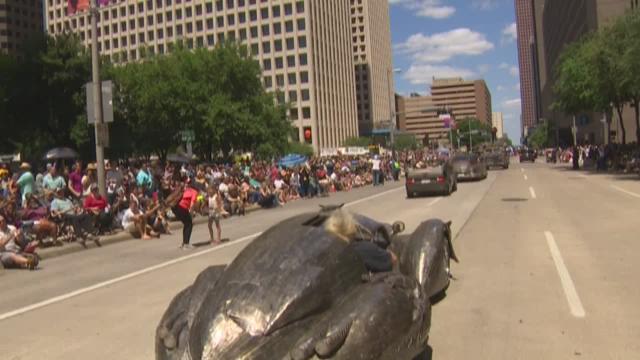 HOUSTON - Thirty years ago, the first Art Car Parade rolled through the streets of Houston.

What was an event featuring just a few cars and a small crowd has grown into a local institution, drawing hundreds of entries from all over the country and the world.

"A lot of people from Houston come up to our event, so we made it down for the 30th Anniversary," said Rodney Wood, an art car owner from Trinidad, Colo., which is home to the annual ArtoCade.

Most of the mobile masterpieces, however, are created by some of the Houston's youngest residents.

Students at HISD&#39;s Lovett Elementary built &quot;Five, Four, Key, Two, One&quot; out of a donated shuttle bus. It is the school&#39;s fourth entry.

"It's pretty cool because it's an owl-stronaut," said one Lovett Elementary student, describing "Five, Four, Key, Two, One," the school's entry in this year's parade.

Crafted out of a donated shuttle bus, the art car is covered with panels decorated with different kinds of keys.

"The kids were all, 'Mr. Polidore, let's make a space shuttle.' I'm all, 'Let's go for it,'" said visual arts instructor, Rickey Polidore.

The bus is the fourth art car the school has worked on over the years, two of which made their way through Saturday's parade.

"That is just unprecedented for an elementary school," Polidore said. "We're building and nurturing and growing more Art Car creators. I don't know if downtown will be able to handle it in a few years."

&quot;Hooptie on safari&quot; is how Scott McCool describes his Art Car Parade entry, which is complete with stuffed boar, mountain lion and peacock.

Everything in the parade with wheels - the cars, the bikes, even the motorized gurneys - comes with a story.

For example, In Bloom's entry features a boar, a mountain lion and a peacock that owner Scott McCool claims to have hunted himself.

"It's a hooptie in South Texas that's on safari," McCool described. "It took us about a month to build it."

A month is nothing compared to the 10 years Houston dad Mitchell Clemens spent on his "dragon truck." He said he started the project when his daughter told him she wanted to ride to school in an art car.

A decade later, he's still giving her rides and getting a lot of looks.

"A lot of waving, people taking pictures, honking," Clemens said. "It's the only time I see people in traffic smile."

Mitchell Clemens says it&#39;s taken him about 10 years to get his &quot;dragon truck&quot; to this level after his daughter asked him to build an art car.

On Saturday, Clemens' audience grew to an estimated 300,000 people who packed the downtown sidewalks to watch more than 250 mobile masterpieces roll by.

Some of those cars will get a share of more than $20,000 in prize money on Sunday. Parade judges will name overall and theme winners in a ceremony that starts at 12 p.m. at Smither Park.