Rescued Pets Movement, a local rescue that save pets from a Houston kill shelter, has run out of money and is forced to make drastic cuts in the number of animals it can rescue each month. 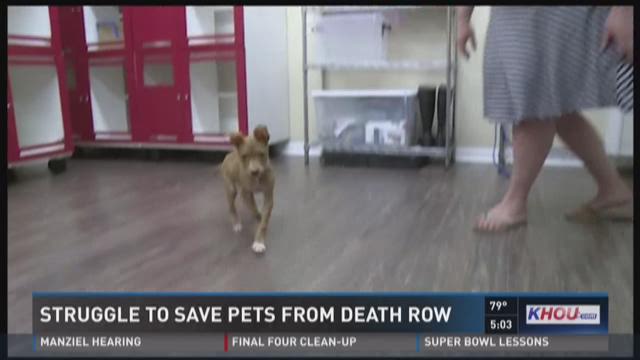 HOUSTON – A local animal rescue is making some tough changes.

Rescued Pets Movement, or RPM, takes animals from Houston’s BARC Animal Shelter and moves them to no-kill shelters in places like Colorado, Wisconsin and Canada.

RPM receives enough money from the city of Houston to transport 480 animals each month.

“BARC gives us $75 per animal transported, which covers only a third of the cost,” said Cindy Perini, co-founder of RPM. “We have continued blowing past the 480 each month, because if you can save a life, gosh it’s hard to say, ‘We just don’t have the money.’”

Instead, they’ve been saving closer to 700 pets each month. Now, the group really doesn’t have the money.

Effective immediately, RPM is making drastic cuts. For the next few months, they can only afford to rescue about 100 pets each month.

They’ve also shut down boarding in their kennels. The last few dogs were sent to foster homes Monday.

In the meantime, RPM leaders are reorganizing and working on their budget.

“It’s really difficult because we know how many lives we’re capable of saving and how many dogs and cats are wanted outside of Houston and Texas,” said Ashley Glaw, foster coordinator at RPM.

The group says, however, they can bring the number of rescues back up with help from the public.

“Help us pick up the slack so we can continue to save these animals that have a place and someone who wants them, instead of having them euthanized here in Houston,” said Perini.