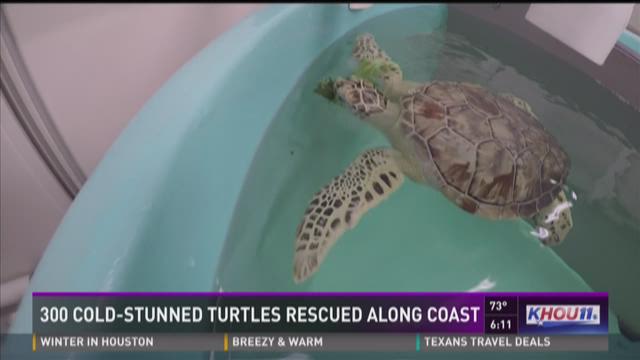 GALVESTON, Texas - Hundreds of green sea turtles have been rescued up and down the Texas coastline. All were cold-stunned after the recent freezing weather.

Some of those turtles are recovering at the NOAA Fisheries laboratory in Galveston.

“Often, they’re reported to us as deceased animals, because they are not moving. They are so lethargic. Their flippers aren’t moving. They just float there at the surface or they just rest at the shoreline,” said Howell.

Four distressed turtles were reported to NOAA Fisheries over the weekend.

Unfortunately one died, and another was gone by the time they got there.

However, two cold-stunned turtles are currently being treated.

Howell says one of them had the coldest body temperature she’s ever recorded.

“The animal’s body temperature was 44 degrees. It was amazing the turtle was still alive and even functioning. It is recuperating right now, so it’s a miracle turtle,” said Howell.

After they are rescued, experts say the turtles’ have to be warmed up slowly – a couple degrees every couple of hours.

The turtles rescued last weekend won’t be released back into the ocean until Galveston weather warms up for good in the Spring.

If you see a turtle that appears sick or deceased, Howell says it’s really important to call NOAA Fisheries as soon as possible at 1-866-TURTLE5. The line is available 24/7.

One of the turtles rescued from the Texas coast after last week&#39;s freezing temperatures.