31 people were transported to the hospital, and 55 others were also affected but refused transport. 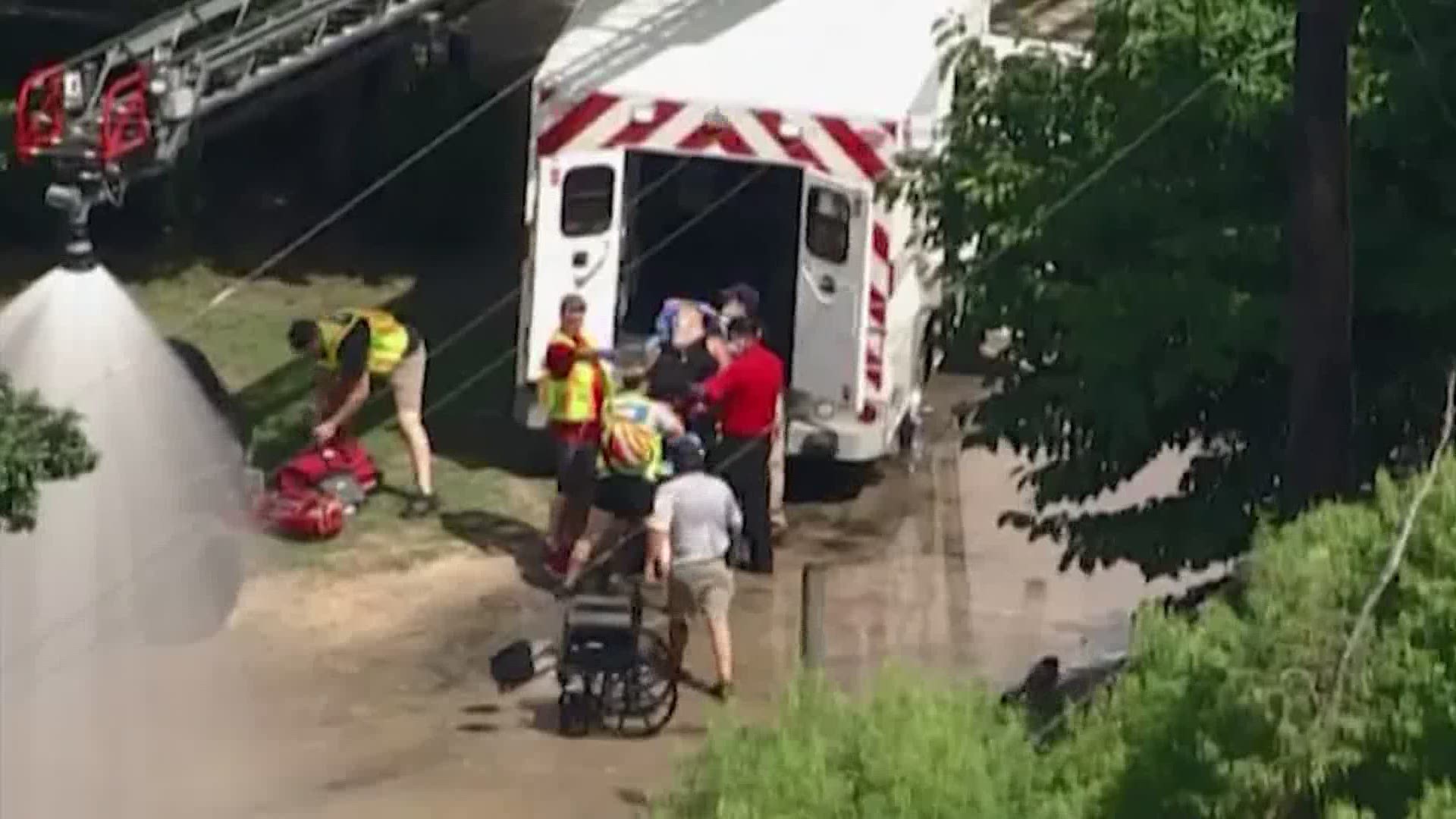 Cy Creek EMS, Spring Fire Department and HAZMAT responded to the scene around 3 p.m. Saturday at the waterpark in the 21300 block of the North Freeway. Officials said the incident happened at the kiddie pool inside the park.

The Harris County Fire Marshal's Office said 31 people were transported to the hospital, and 55 others were also affected but refused transport. Dozens underwent decontamination.

Sunday morning, Memorial Hermann Hospital reported that the 28 total patients who went to their hospitals -- 21 to the Texas Medical Center and 7 to The Woodlands Medical Center -- were all discharged in good condition.

“You’ll never forget this trip to Six Flags for sure," visitor Bobby West said. “They just funneled people out the front. Just a lot of people going in one direction, really slow. miserable, but we got out. They were wheeling people out in stretchers, looked like quite a few people.”

According to officials, one of those most seriously affected was a 3-year-old child who suffered respiratory issues. Harris County Judge Lina Hidalgo said the child was transported to Texas Children's Hospital in The Woodlands and is in stable condition.

The entire feeder road has been shut down here at Six Flags Hurricane Harbor Splashtown. Dozens of people were injured in a chemical leak. HCFMO verifying chemical or chemicals involved. Hoping to get an update soon. @KHOU pic.twitter.com/cGRkyMfbIQ

KHOU 11 reporter Janelle Bludau was at a news conference about the incident yesterday, where officials with the Harris County Fire Marshal's Office said the chemical involved 35% sulfuric acid and hypochlorite solution, which is bleach water -- both commonly used in pools. They're investigating to determine what happened to them to create the reactions.

“I just kept wondering why I was burning.” These women and their kids say they were at the kiddie pool when they started feeling a burning sensation. And they had to be sprayed off by first responders. @DavidGonzKHOU @KHOU pic.twitter.com/R2vsva8yWf

Some people like Nakia said they felt skin irritation.

“I just felt like burning everywhere. On my hands and my legs,” Nakia said. “And even washing, they had us rinse and I said, ‘well, why do I still keep burning. I don’t know if it was coming out of my hair.’”

To help decontaminate them Seifert said firefighters set up their ladder truck with a nozzle at the end and sprayed folks down.

“They walk through there and they basically massage their eyes and things like that to get any chemicals out of their eyes if they’re affected,” Seifert said.

He said everyone who was affected is expected to be ok.

Harris County Judge Lina Hidalgo said anyone who was at Splashtown Saturday should monitor their health for symptoms.

If you think you’re sick go to the emergency room immediately and let them know you were at the water park during the time of the chemical leak.

Officials said the facility was last inspected by HCFMO on June 29, 2021.

Harris County Public Health and HCFMO issued close orders for the park. HCPH said its Environmental Public Health Division will conduct testing and inspections of all pool systems Saturday night to determine the cause of the chemical exposures and address public health and safety concerns. The park will remain closed until it is deemed safe for reopening to the public, officials said.

Here’s a look at Splashtown in Spring. Just talked with a woman who said she felt a burning sensation. She said it happened around the kiddie pool area. They felt dizzy as well. They were rinsed down before leaving. #khou11 pic.twitter.com/3yEtyPu2sJ

"At approximately 2:30 this afternoon, a small number of guests in a section of the park reported feeling ill with respiratory irritation. The safety of our guests and team member is always our highest priority and the park was immediately cleared as we try to determine a cause. Out of an abundance of caution, the park has been closed for the day."