The small town of Alto in Cherokee County is beginning the cleanup process after tornadoes wreaked havoc the area on Saturday. 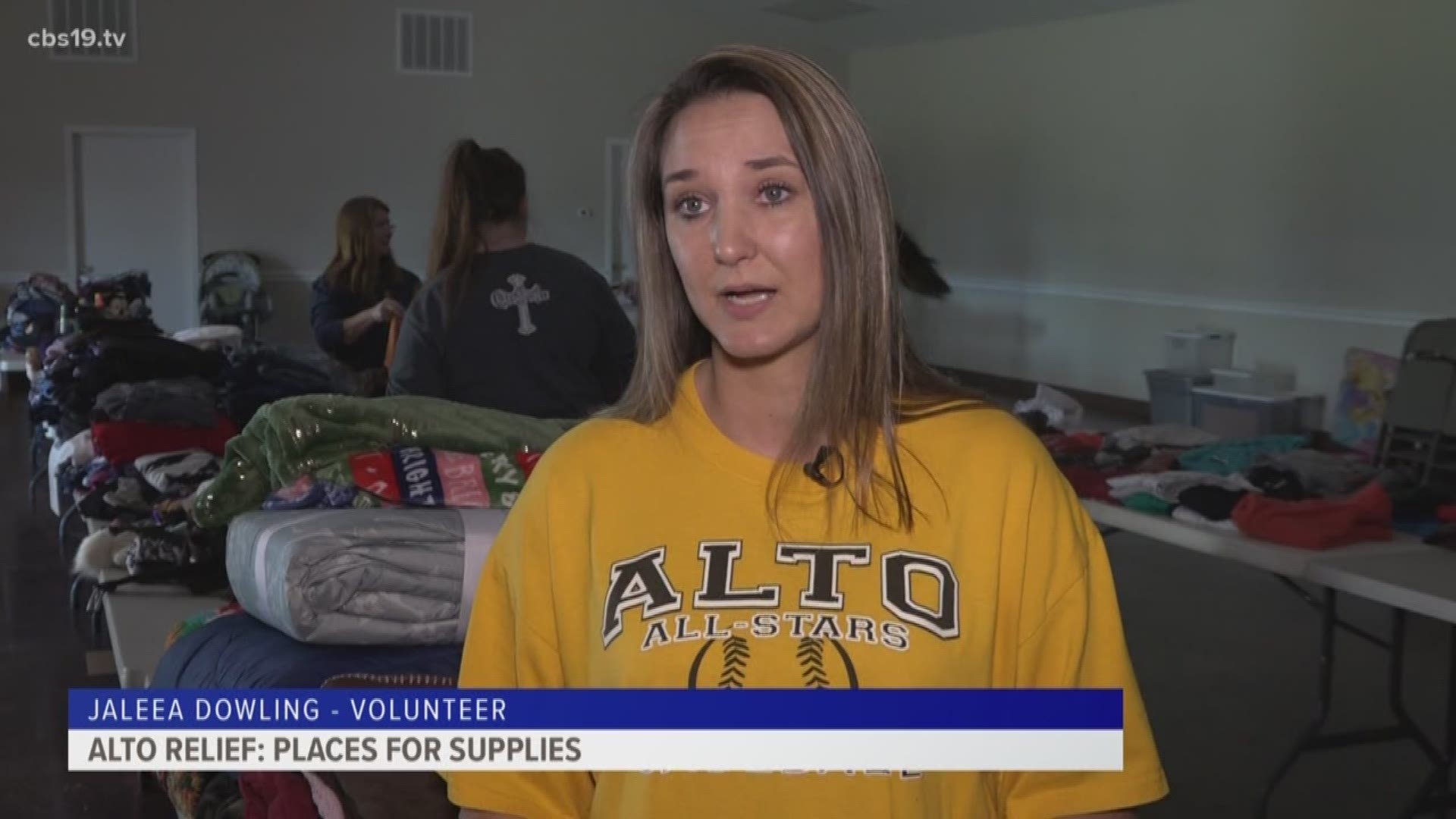 ALTO, Texas — The small town of Alto in Cherokee County is beginning the cleanup process after tornadoes devastated the area on Saturday.

Residents are currently in need of:

If you have access to chainsaws or tractors and are able to assist with the cleanup, you are asked to go to Alto Missionary Baptist Church, located at 107 East Elkhart Street. They are also accepting supplies and clothing donations. A. Frank United Methodist Church is also accepting clothing.

Prepared food and water should be taken to The River Church, located at 595 South Marcus Street.

Bancorp South Bank has also established a fund for monetary donations. You can tag the donation under the "Alto Relief Fund." The bank is located at 134 North Marcus Street.

Additionally, a collection site has been set up at American State Bank in Arp and is accepting canned goods, clothes, shoes and toiletries. The items will be picked up on Wednesday, April 17, and Friday, April 19, by members of the Mount Enterprise Volunteer Fire Department.

Oden Plant Farm at the Broadway Square Mall in Tyler is also accepting donations from 9 a.m. until 6 p.m., Monday-Saturday, and will make sure they get to Alto.

Academy Sports + Outdoors in Tyler is accepting donations for those affected by the storms.

Tuesday, the sporting goods store will hold a drive from 8 a.m. until 2 p.m. collecting necessities for the victims.

The following is a list of supplies Academy is accepting:

The Cherokee County Office of Emergency Management will also set up a drop-off point for agricultural supplies. Cherokee County Ag Extension Agent Aaron Low will be in charge of the center, which will be across from Alto City Hall.

Some supplies needed include:

GoFundMe donation sites have been set up for Victor Galan, archaeologist ad Vice-President of the Friends of Caddo Mounds volunteer organization, as well as for the family of Jace and Dilynn Creel, who were killed during the storms.

According to the GoFundMe, Galan sustained neck and spine injuries and will endure a long recovery.

The Creel children were killed in Pollok after a tree fell on the vehicle they were in. The GoFundMe was established to help the family with funeral expenses.

Visitation for the brothers will take place on Wednesday, April 17, at Carroway Funeral Home in Lufkin from 6 p.m. until 8 p.m. The memorial service is scheduled for Thursday, April 18, at 10 a.m.