In 1989, there were measles outbreaks in 47 states and the District of Columbia, according to the CDC. 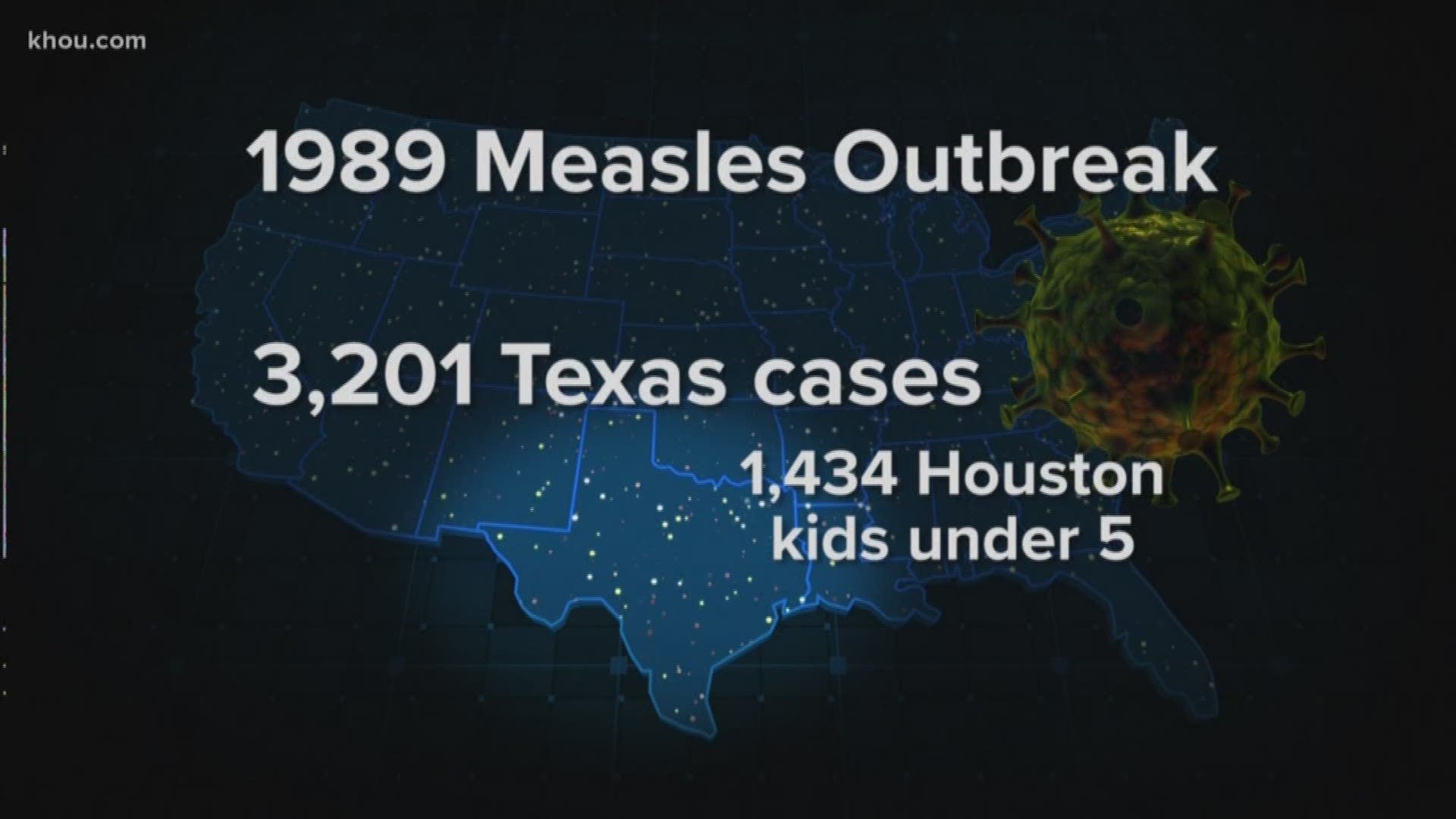 HOUSTON — Health officials continue to investigate the measles outbreak in Greater Houston that has affected two toddlers and an adult in Harris County, one toddler in Montgomery County and a fourth toddler in Galveston County.

RELATED: Verify: Can children go to public school without being vaccinated?

Houston has dealt with measles outbreaks before, including a large outbreak in 1989, the worst in recent history.

In 1989, there were measles outbreaks in 47 states and the District of Columbia, according to the CDC. Local and state health departments reported 17,850 nationwide which was a 423 percent jump from the previous year.

Dr. Melanie Mouzoon, pediatrician and managing physician for immunization practices at Kelsey Seybold, was there.

“If you think you’re miserable with the flu, you should get the measles,” Mouzoon said. “You saw children come in and they had a high fever or they may had been hallucinating due to their fever. They may have been sick for days.”

By the end of 1989, there were 41 deaths nationwide. 31 of those were unvaccinated children. In Texas, 10 people died.

Unlike today, the reasons for not having a vaccine weren’t due to the anti-vaxx movement.

“Back in the '80s, the problem really was people didn’t have access to vaccines," Mouzoon said. "They weren’t coming in to get their shots as regularly, so we had a lot of unvaccinated people. Back then we gave this vaccine at 15 months, and it was partly due to that outbreak that we moved the age of vaccination down to 12 months.”

RELATED: Measles: 11 things you should know

The CDC says health officials went door-to-door in high-risk areas. They also set up pop-up clinics vaccination clinics. A vaccine is still the only defense against measles.

“The best thing you can do for your child is to get them vaccinated, because we are all at risk that there will be more outbreaks in Houston and around the country as more and more people refuse vaccines," Mouzoon said.

Currently, the MMR vaccine is given to a child twice, once at 12 months, then again at 4 years old. With both vaccines, a person is 97 percent protected from the virus.

Adults can get measles, too, and can be vaccinated as adults.