A Solid Waste Department spokesperson confirmed it all wound up in the landfill.

HOUSTON — The City of Houston Solid Waste Management Department has launched an investigation after KHOU 11 Investigates captured video of a garbage truck driver not recycling recyclables in an entire west Houston neighborhood.

It all happened a week ago on Earth Day.

Le lives in the Tanglewilde neighborhood east of Gessner Rd. between Westheimer and Richmond. On block after block, the city employee picked up garbage and recyclables from separate city-issued bins and dumped it all together in the same truck.

Here's a letter from the City of Hosuston's Solid Waste Department concerning an employee mixing the trash with recyclables. 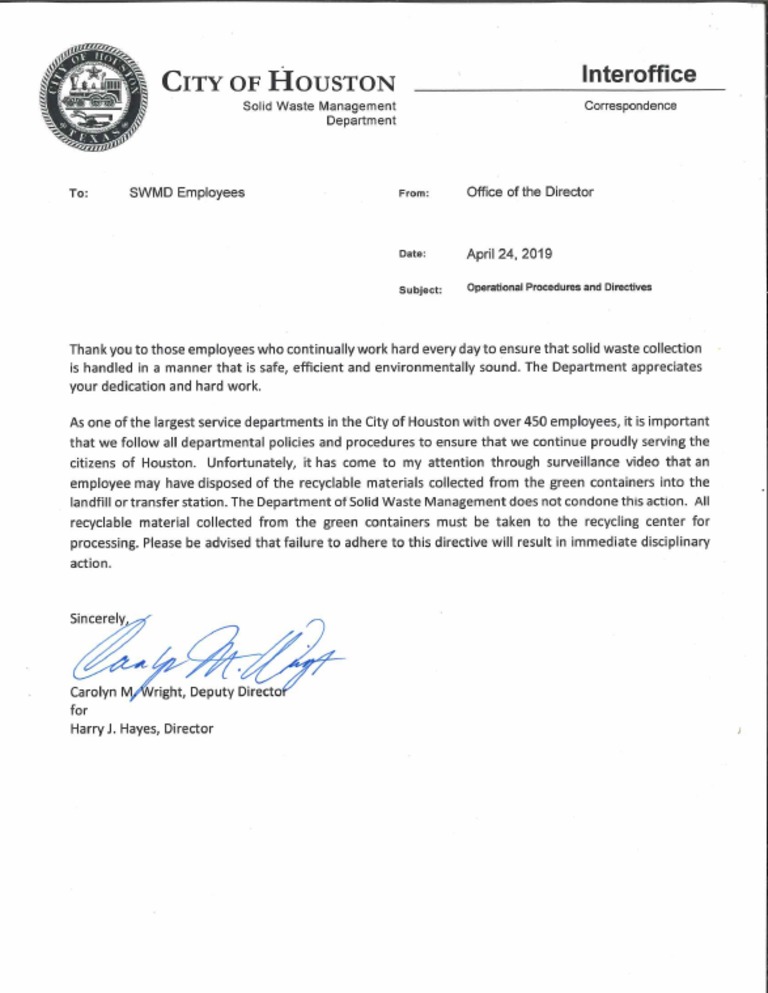 Letter from Solid Waste Department
Crry or Houston ___Interoffice _ Solid Waste Management Correspondence Department e& To: SWMD Employees From: Office ofthe Director ewe: April 24, 2018 Ssunjct: Operators Proceaues an Oe 'Thank you to those employees who continually work hard every day to ensure that sold waste collection Is handled in a manner that is safe, efficient and environmentally sound.

A spokesperson for Houston’s Solid Waste Management Department confirmed the mixed load wound up in the landfill, instead of the city’s brand new, state-of-the-art recycling center in northeast Houston.

“That’s not supposed to happen, no no no!” said Le.

Other homeowners who also dutifully separate their garbage and recyclables called it a rotten deal and a waste of their tax money.

“I’m trying to do my part to contribute to the environment,” said Ana Hirsch Pells.

Across the street, the environmentally responsible Ty Pustejovsky was planting a vegetable garden in his backyard, trying to leave less of a footprint on the earth.

“I mean, it kind of leaves me a little bit speechless to see that,” Pustejovsky said.

His message to the city?

“Get your people doing what they’re supposed to be doing … it’s a real simple conversation, green is for recycling, black is for the landfill,” he said.

The Solid Waste Management Department declined to make anyone available for an interview, but did send a letter to all employees stating it does not condone the behavior and that all materials collected from the green recycling bins must be taken to the recycling center.

Mayor Sylvester Turner blamed the Earth Day blunder on the actions of a rogue employee and maintained he was not authorized to do so.

“From time to time, you have an employee that kind of goes afoul of the rules,” Turner said.

“This is not acceptable, this is not the policy, you are not to do it, and if you’re caught doing it there will be disciplinary actions,” he said.

But there are questions as to whether other employees were aware of what was going on. KHOU 11 Investigates also videotaped a supervisors’ pick-up in the same neighborhood, that was following the garbage truck in question towards the end of the day.

“And if we determine that this is more of a problem than just this one singular incident than we have a real problem,” he said.

As the city’s investigation moves forward, homeowner Harley Le is leaving city officials with a message.

“Makes me mad,” she quipped.

KHOU 11 Investigates has filed several open records requests for months of garbage truck and recycling truck routes, and the GPS records for those records to determine if there was a pattern in treating recyclables like trash.