In the last 10 days, the City of Houston says it has received more than 10,000 reports of leaks, service needs and main valve issues. 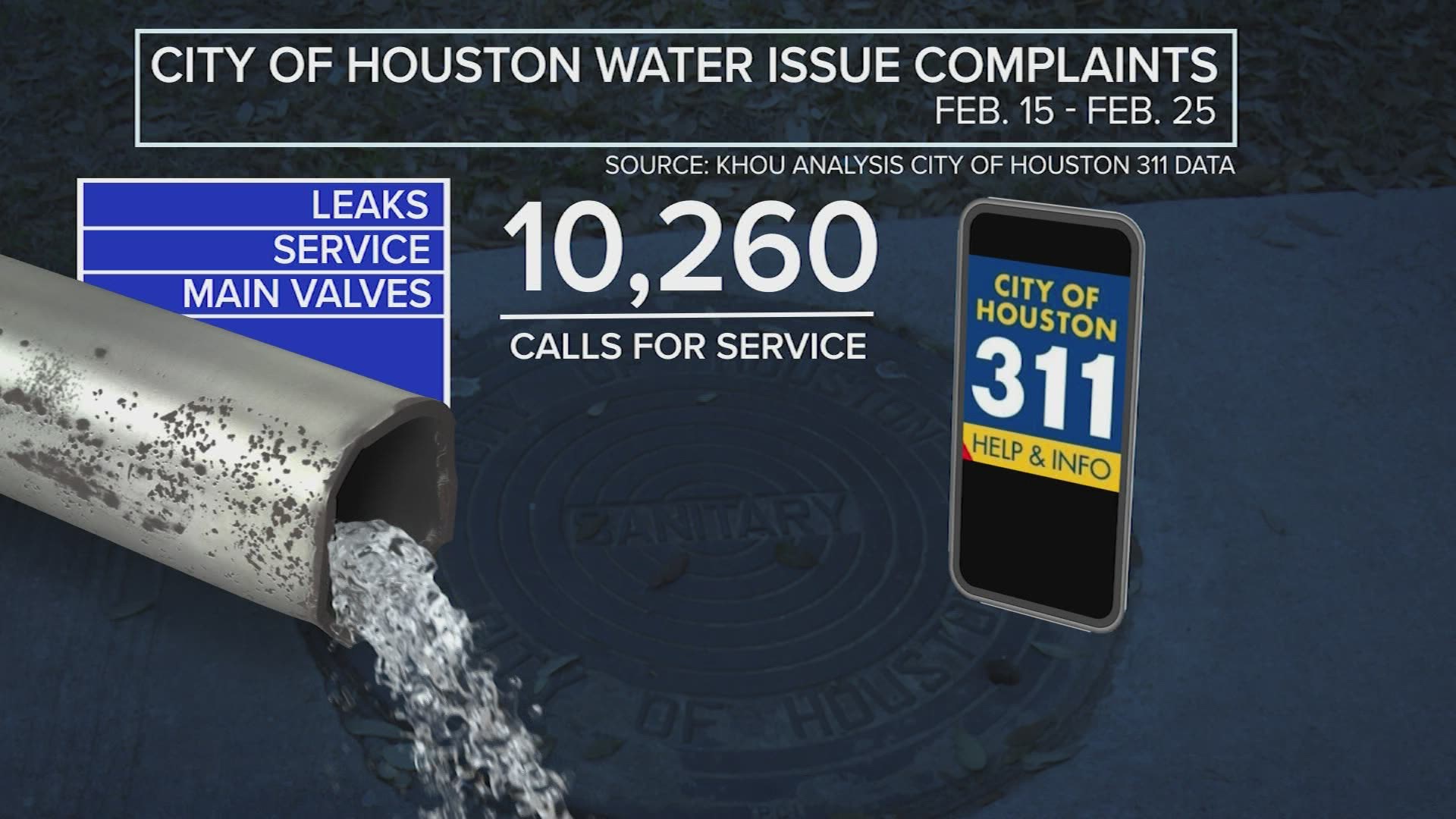 HOUSTON — In the 10 days since the winter storm hit Houston, the City of Houston has received more than 10,000 water issue service requests, the equivalent of 10 weeks' worth of complaints during normal times, according to a KHOU analysis of 311 helpline data.

The Houston Public Works Department said it’s had to get creative to keep its head above water.

RELATED: Here's what the city of Houston says is causing a strange odor in drinking water

Shutting off the main valve was a problem at Mark Anthony Florist in Montrose.

“Our tool bent, wasn’t strong enough, nowhere as big as what the city’s got,” Tony Ruisinger said.

Records show the floral shop made a 311 service request a week ago. A city crew finally showed up Thursday.

“We’re just one of many and they’re just trying to get to everybody in the queue,” Ruisinger said.

In the Spring Branch neighborhood, homeowner David Cornelius is one of those still waiting.

“I’ve been here 30 years and I’ve never had a leak like this before,” he said.

The City of Houston has received requests like never before. From Feb. 15 to 9 a.m. Thursday, 10,260 calls for service came through the 311 helpline. Those include everything from low pressure and minor leaks to major main breaks. The service request total is a 626% increase compared to the 10 days prior to the winter storm.

“We're seeing breaks across the board in every kind of structure that has been in town,” Haddock said.

She said single-family homes have generally been the easiest to address quickly, but the department continues to struggle with multi-story buildings because there are so many places inside with private plumbing problems.

“So if you've got an apartment complex, that one or two (units) had a break in it, they don't have separate valves for each of those units,” Haddock said. “And so (city crews) are having to keep the water off to the whole complex while they address the breaks.”

As of 9 a.m. Thursday, Houston Public Works reported 5,312 open requests, not including fire hydrant problems. Depending on the severity of the issue, the city has a target repair date of between two to 10 days. Records show nearly one-third of open requests are considered overdue.

Haddock said crews have been identifying leaks that impact personal property and making those the highest priority, rather than water leaking down the street.

“If some of the others go overdue, that’s a consequence that I’m willing to suffer to help people’s private property,” Haddock said.