One high school principal called it an epidemic among students. 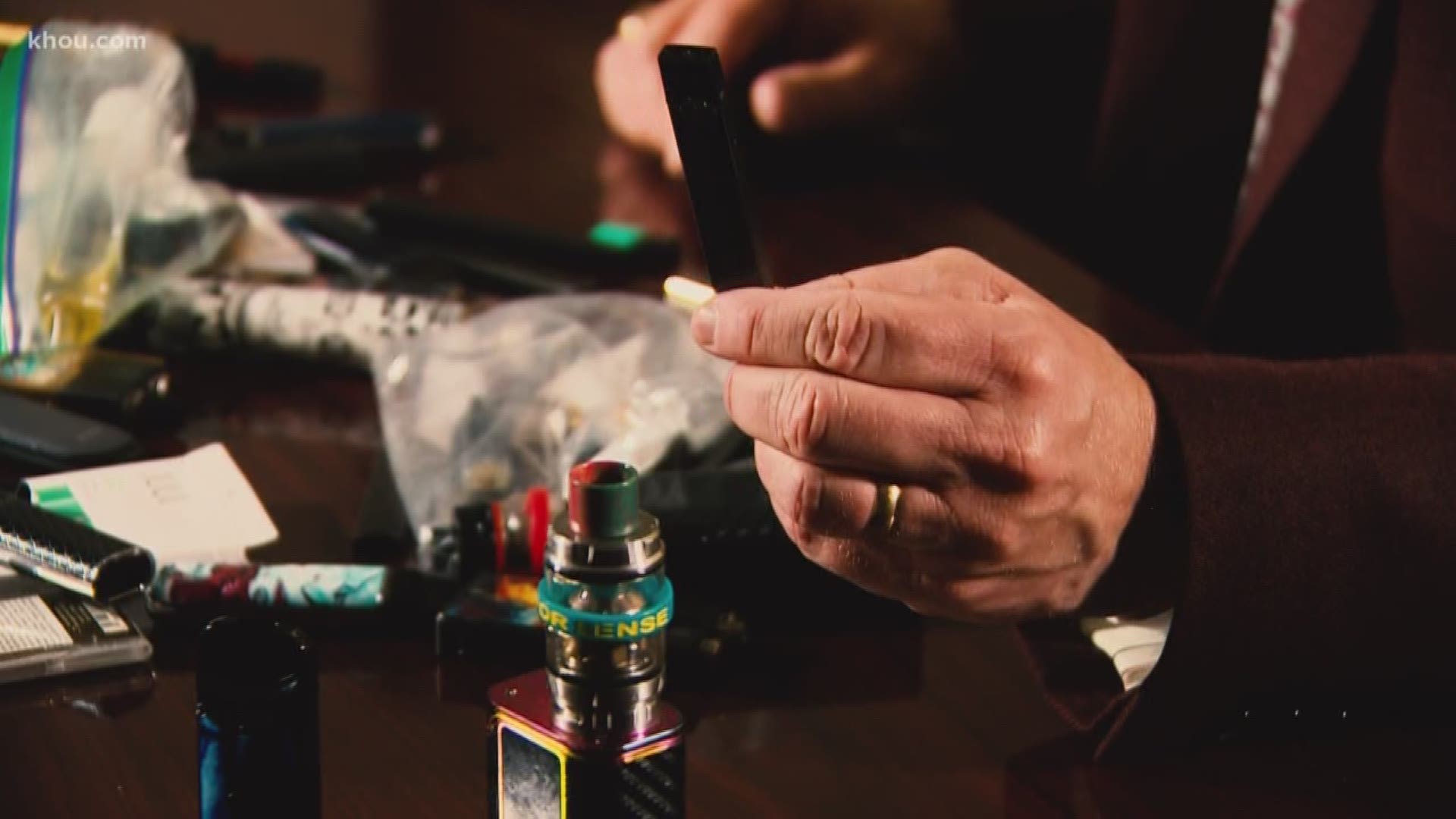 Clear Lake High School football coach Larry McRae wants his athletes in their best shape. Although the Falcons’ football season is over, McRae has his team running shuttle drills on the football field on a warm November afternoon to keep their skills sharp.

But it’s not just about their physical abilities on the field McRae is concerned about; he also wants them in their best health. That means no smoking, no drinking—and certainly no vaping. It’s a concern for the coach as the trend of using e-cigarettes filled with flavored juices that contain nicotine or, in some cases, THC, the active ingredient in marijuana that produces a high, continues to rise among school-aged kids.

In order to discourage the use of any vaping products among his athletes, McRae has instituted a three-strike-and-you’re-out policy.

“Our hope is that if they are in athletics with us they see these things are detrimental to them and athletics is a good thing. So, I’m going to make sure I walk the straight line and don’t do these things so I can participate in the game I love and be around the friends that I love,” McRae said.

All athletes must sign a contract agreeing to not possess or use vapes. The consequences include: a week-long suspension from playing sports on the first offense, a two-week suspension if they’re caught again, and the potential to be cut from the athletic program altogether on the third offense.

“If you get one offense in football, one in basketball, then another in baseball, your athletic career is over,” McRae said.

And beginning this school year as a way to hold all students accountable, Clear Creek Independent School District enacted a no-tolerance vaping policy.

There have been at least 4,800 cases of students caught with a vaping device at 20 of the largest school districts in the Greater Houston area since 2015, according to a KHOU 11 Investigates analysis.

Nearly 3,000 of those incidents happened in the last school year.

Although school districts aren’t required to keep track of students caught with vaping devices, most districts do, KHOU 11 Investigates learned. Only Spring and Houston ISDs don’t.

Down the street from the football field, Clear Creek High School Principal Jamey Majewski poured a large bag of vaping devices that were confiscated from students at his school over the last year and a half.

At his school alone, there were 111 vaping incidents—more than any other school in the Greater Houston area. Overall, Clear Creek ISD had over 600 incidents.

Looking at all the devices on his desk, Majewski called the vaping problem an epidemic among students.

“We’ve had kids put it in their ID pouch. They’re brazen,” Majewski said. “They are hiding them on their bodies, in places we can’t search.”

And not all devices contain nicotine. At a recent virtual town hall meeting broadcasted online for parents, students and the community, Majewski said he’s caught students with dab pens, a vaporizer that contains THC.

“I’ve had to recommend expulsion for more kids this last fall semester for THC-related devices than I have in my prior nine years of being a principal,” Majewski said.

Clear Creek Superintendent Dr. Greg Smith said the growing number of incidents is evidence that students are reporting it. At Clear Creek ISD, students can report it through the district’s See Something Say Something app. During our interview, Smith got the following anonymous tip from a student on his cell phone:

… has a vaping Juul device in her possession at Clear Falls High School. I walked into the restroom and noticed the smell of it and I saw smoke as she tried to hide it. I feel not safe when I’m around it as well.

“Every day we have students telling us it’s a problem on their campuses,” Smith said.

Answers: Which are vaping devices and which aren't?

Photos: Can you spot the vaping device?

Smith worked with lawmakers this legislative session to get the smoking age in Texas raised to 21. But, he said, there is much more work ahead.

“I think we need to get the FDA and others say, ‘You know, when you put things out there that smell sweet, that mask the odor of tobacco, you’re marketing towards children and enough is enough,’” Smith said.

Smith believes a logical next step would be to ban e-cigarette manufacturers from advertising on electronic billboards at local gas station convenience stores. Until that happens, he said, he is boycotting vendors who advertise vape sales.

“I won’t buy gas there. If it’s out there on the marquee, then I’m not going in,” Dr. Smith said.

School district leaders acknowledge the issue is bigger than them. They are calling on everyone to take a stand in their own communities and push for tougher federal laws.

“It’s impacting our students and potentially, we think, it will impact their student performance, whether it’s physically, athletically or academically,” Smith said.