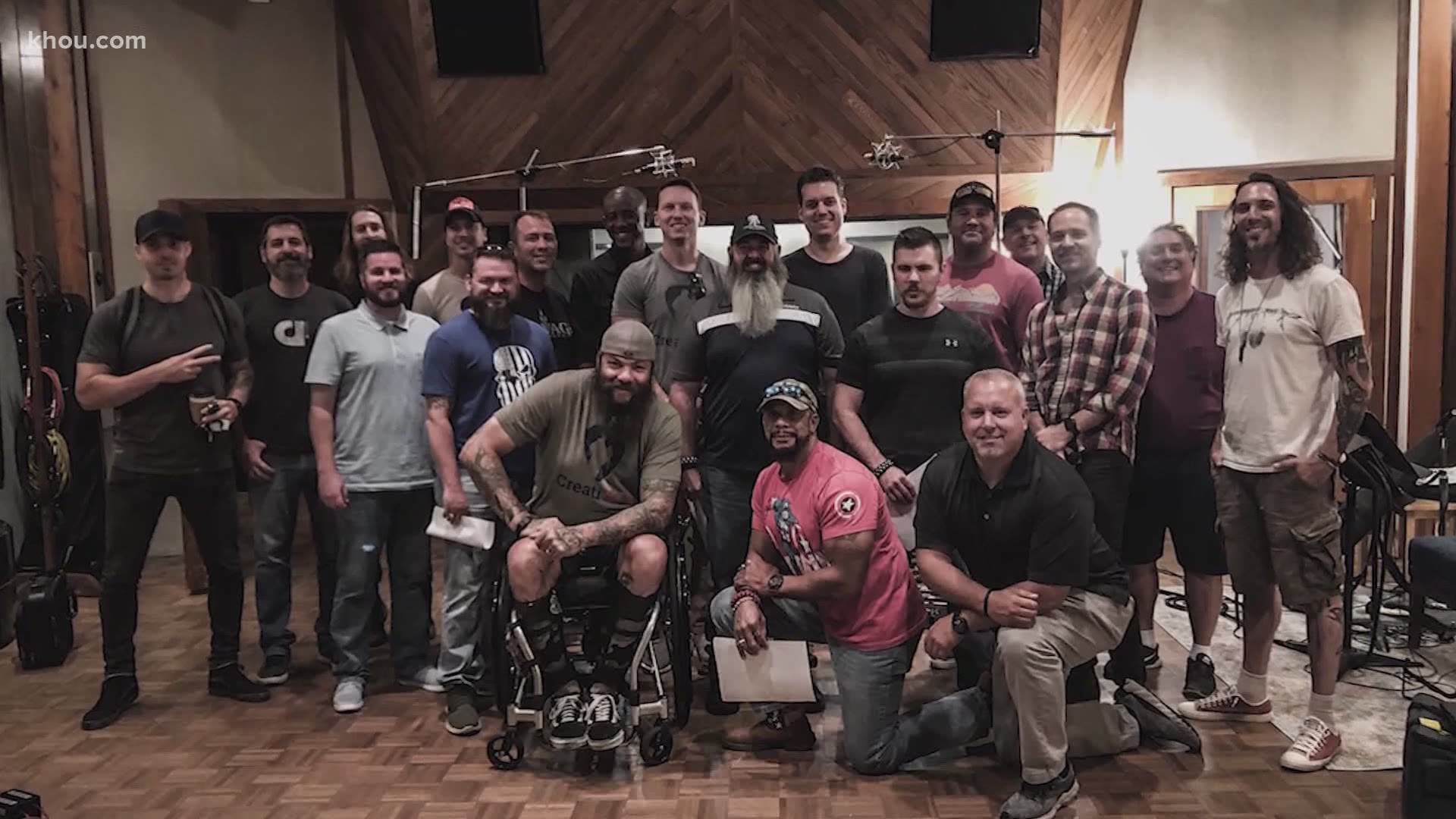 HOUSTON — Music can help to heal even the deepest wounds of war. With the help of some famous songwriters, military veterans are sharing their pain through song.

CreatiVets, the non-profit organization that makes it all happen, started offering music therapy to veterans in honor of Kingwood native Luke Yepsen.

The U.S. Marine Corps. Lance Cpl. was killed in Iraq 14 years ago this week.

Every Dec. 14, Casper flies to Houston and visits Yepsen’s grave at the Houston National Cemetery.

“I talk to Luke, and I say, here’s what’s happened this year," Casper said.

USMC Lance Cpl. Yepsen was the gunner for Casper’s Humvee squad in Fallujah, Iraq in 2006. The Marines patrolled a stretch of road looking for improvised explosive devices.

On Dec.14, 2006, “we saw an IED on the road and we blocked it off to protect everyone around. And then I say, Luke get down in the truck,” Casper said.

He remembers seeing Yepsen’s legs fold down into the Humvee, which signaled that the 20-year old gunner was in a sitting position.

“And then I see him scoot back up, but that’s because they keep coming forward to us, and he keeps doing his job, and I was like, man, Luke. Just get down. And he got down and he got back up one last time, and that’s when we heard the shot, and then he just fell into the truck," Casper said. "And that was it. I mean, we did what we could do, but he ended up dying that day.”

Casper said Yepsen was shot once in the lungs by a sniper.

“I recall thinking, like, was this my fault? That’s a big reason why I was afraid to come at first,” said Casper of his initial visit to Houston. “Because I didn’t know his family. I was in charge of him when he died. So who knows what they thought about me?”

Ever thanked a veteran without ever truly taking the time to understand their experience?

I'm working to share the story of Richard Casper, a Marine who grappled with survivor's guilt after witnessing the 12/14/06 death of Kingwood native Luke Yepsen in Iraq.#khou11 at 6 pic.twitter.com/BWBIvakzUy

Yet. Years after Yepsen’s death, Casper connected with a country music songwriter. The two agreed they’d try to find the words for Casper’s unbearable pain.

That’s how Casper formed the idea for CreatiVets. He got veterans to Nashville, Tenn., to share their stories -- stories veterans may not know how to tell or process.

“And we have these songwriters that do it for a living that can tell a love story a thousand different ways. Why can’t they tell my story?” Casper said.

CLICK HERE TO LISTEN TO THE SONGS OF VETERANS

The nonprofit is at the mercy of donations. CreatiVets covers all expenses for veterans who agree to allow a songwriter to tell their story. The process is done backstage at the Grand Ole Opry. So far, more than 100 stories are now songs. You can listen to them on just about every music platform, including through Alexa devices. All you have to say is, "Alexa, play music by veterans."

“You’re getting a look into our world which nobody gets into. So we have family members and people who were like, I didn’t know my husband felt that way. But they’re having conversations because now there’s a song that connects them," Casper said.

CreatiVets is expanding its reach and hopes to connect with depressed or suicidal veterans in the comfort of their own home.

“Yeah. It just kind of worked out,” said Kyle Yepsen. Luke’s older brother now works for CreatiVets as development director. “I hope he would be proud. I think he would. I think he would see that I finally found my true calling.”

So many lives helped, healed and saved, all because Luke Yepsen lived.

It helped Richard so much, he started @CreatiVets1.

Songwriters team with veterans to create some incredibly moving songs.

The writing happens backstage at the @opry.

So, when you visit YouTube for makeup tutorials or to watch video games, consider listening to a song or two pic.twitter.com/gDj1zriwbW

More than 100 veterans are waiting for their turn at the music therapy. CreatiVets relies on donations. If you can help a veteran heal, consider making a donation.

ARE YOU A VETERAN?