KHOU 11 Investigates found the city is not following its own rules in 17 locations around town, where posted speeds are lower than speed limits defined by city ordinance. 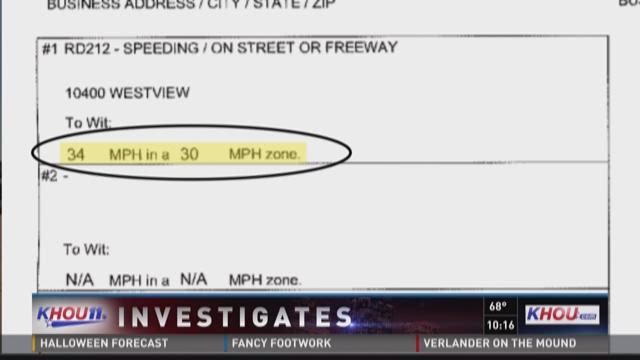 Harvey Kidd, 82, was driving down Westview Drive, just a few miles from his home, last July when he saw the lights from a motorcycle officer. He had one thought.

Kidd took his punishment – defensive driving and a fine – because he knew he was driving faster than the posted speed limit, 30 miles per hour.

But the sign doesn’t tell the whole story. The city ordinance lists the speed limit at 35, not 30, so under local law, Harvey was not speeding at all. He technically was driving under the speed limit.

KHOU 11 Investigates found the city is not following its own rules in 17 locations around town, where posted speeds are lower than speed limits defined by city ordinance. Hundreds of drivers have paid more than $54,000 in speeding ticket fines in the mismatched zones.

From January 2016 to August 2017, 460 speeding tickets were issued in those locations, according to a KHOU 11 Investigates analysis of municipal court records. Of those tickets, 39 were like Kidd, driving below the speed limit on the books.

The majority of the tickets – 270 – were on one road, Allen Parkway. The signs were changed to 35 miles per hour, but not the 40-miles-per-hour city ordinance, when the parkway underwent $10 million in improvements in 2015 and 2016.

Pearland resident Sam Walker drove through the construction on his way to work for months. When it was completed, he found himself signing a speeding ticket. Walker blames his scramble to get to work on time and his lead foot.

“For those people like me who push the pedal a little bit, you definitely don’t need anything additional against you,” he said.

“I’m not a fan of surprises when I’m driving around.”

The signs changing were not a surprise. Months of public meetings in 2015 cited a traffic analysis and touted the lower speed as necessary for safety along Buffalo Bayou Park.

Walker assumed the signs and law would correlate, and was confused when he learned that they did not.

“I definitely wish I knew that going in. I would have loved not to have paid that ticket, and not have had to take that defensive driving course,” Walker said.

Walker was ticketed at 44 miles per hour, just four miles over the speed on the books.

Mechanic Juan Najera was driving even closer to the speed on the books when he was ticketed in a mismatched speed zone. Najera was clocked driving 46 miles per hour on Elysian Street this June. The sign says 35, but the law says 45, just one mile below Najera’s speed.

“It’s not fair,” Najera said in Spanish. “I had to go to court; I had to pay the speeding ticket; I had to lose half a day of work.”

Along with the money he lost by missing work, Najera ended up paying a more than $200 fine.

“I had to pay for something I didn’t do,” Najera said.

Speeding ticket fines are based on miles per hour over the speed limit, so Najera’s fine could have been lower if he’d been ticketed at the speed on the books.

But the law takes it a step further, said longtime traffic attorney Paul Kubosh. He said the error makes a ticket defective, and all those tickets should be dismissed.

Kubosh said he routinely gets tickets dismissed because of signs mismatched with the ordinance. He called it a “bureaucratic mess” that’s been going on since he began practicing law in 1993.

“I’ve called it mistakes, a bureaucratic fumble, but it’s gone on from time to time,” Kubosh said. “The reason this hasn’t been fixed has more to do with the left hand not talking to the right.”

Two of the mismatched speed zones -- Beaumont Highway westbound near North McCarty, and FM 1959 east of the Gulf Freeway -- are in city limits but maintained by the Texas Department of Transportation.

TxDOT Spokesman Danny Perez said they always try to work with the city and keep a constant flow of communication.

“So we look at those areas and then we’ll make changes according to the (engineering) study, if the study recommends lowering or raising the speed limit,” Perez said.

“We send memos, and we’ll coordinate. It’s a partnership.”

Changes in a roadway may trigger a study. Take FM 1959, TxDOT set the speed limit at 50 mph years ago, but changed it to 40 when development started popping up around the area.

“We did notify the proper folks to make sure the information got over, right now, we’re still researching where.. any kid of issues may have arisen,” he said.

In the case of FM 1959, 50 miles per hour is still on the books, not the 40 miles per hour TxDOT said is needed. Ultimately, city council must pass an ordinance changing the limit for it to be enforceable.

“What we didn’t follow through was update the ordinance,” she said. “You brought this to our attention. We’re actually going to review all the rest of them and make sure we’re not missing any others.”

She said the public works department planned to present an ordinance to council to make sure they all match.

But the city doesn’t plan to change any signs, because Haddock said speed studies were conducted and it’s the law that need to change, not the signs.

To put the issue in perspective, Mayor Sylvester Turner said the 17 problem speed zones pale in comparison to some 3,000 speed zone areas within the city.

“Now we’ve got to make sure that the speeding number on the speeding sign matches the ordinance, and that’s what we intend to do,” Turner said.

Scroll down to see the full list of streets below, or click here to view the map.