Recycling trashed: City audit confirms 1,300 tons of recyclables were sent to a landfill

The 12-page report identified a total of 532 mishandled incidents across every sector of the city from January to June.
Author: Jeremy Rogalski
Published: 10:45 PM CDT August 7, 2019

HOUSTON — An internal City of Houston audit confirms what KHOU 11 Investigates uncovered about the handling of curbside recyclables: 2.6 million pounds ended up at the landfill in the first five months of this year.

The 12-page report, drafted by Chenella Queen, Senior Auditor for the Solid Waste Management Department, identified a total of 532 mishandled incidents across every sector of the city from January to June.

The 1,301 mishandled tons were about 11 percent of all recycling properly collected during that time.

The scope of the audit covered more than 11,700 documents related to daily driver work performance as well as landfill disposal data.

It stated that solid waste drivers did an “excellent job” of documenting their activities in daily work logs, but supervisors failed to react or respond to entries that showed policy violations.

The report never states that management directed employees to haul recyclables off to the dump. One environmental watchdog said that doesn’t add up, given the number of incidents over so many months.

“From my experience, this is not the case of rogue drivers,” said Robin Schneider, Executive Director of the Texas Campaign for the Environment.

“I would put money on the fact that this was some level of supervisor that was directing people to do this,” Schneider said.

The audit suggested in some cases, mixing recycling with garbage was a consequence of sloppy practices rather than intentional rule breaking.

“A process should be put in place and strictly enforced which identifies partial loads remaining on trucks overnight or through the weekend,” Senior Auditor Queen wrote.

“In several instances employees unknowingly used a “parked” truck that contained either garbage or recycling and took that unit to their work route, thereby mixing the load unknowingly” Queen wrote.

But another audit finding pointed to a more deliberate disregard of city policy.

Despite that directive, the audit found 106 mishandling incidents after the memo was issued.

“I think the mayor needs to seriously look at a change at the top,” Schneider said. “Firing a few truck drivers does not solve the problem at this department.”

Hayes said that discipline will cover employees and members of the management team.

He did not say how many workers would be punished or how high up the discipline would reach. 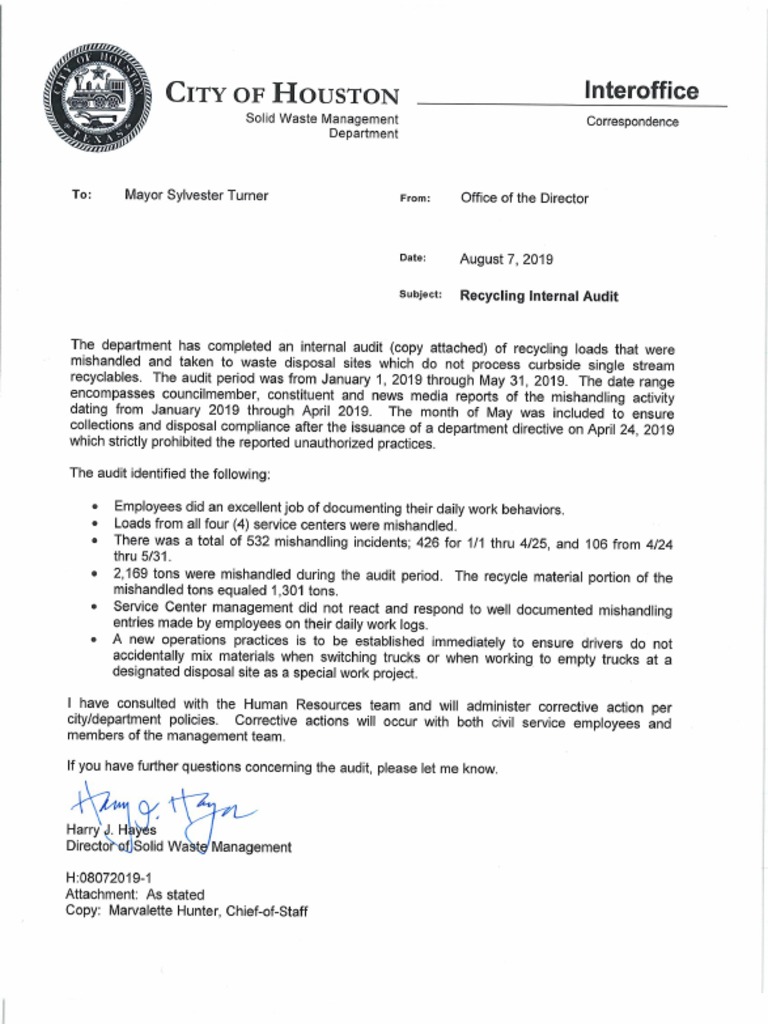 Recycling audit for the city of Houston
This 12-page report, drafted by Chenella Queen, Senior Auditor for the Solid Waste Management Department, identifies a total of 532 mishandled incidents across every sector of the city of Houston from January to June. The 1,301 mishandled tons were about 11 percent of all recycling properly collected during that time.