The EPA lists the TPC Group facility as having 'high-priority violations' and noncompliant with the federal Clean Air Act every quarter since January 2017. 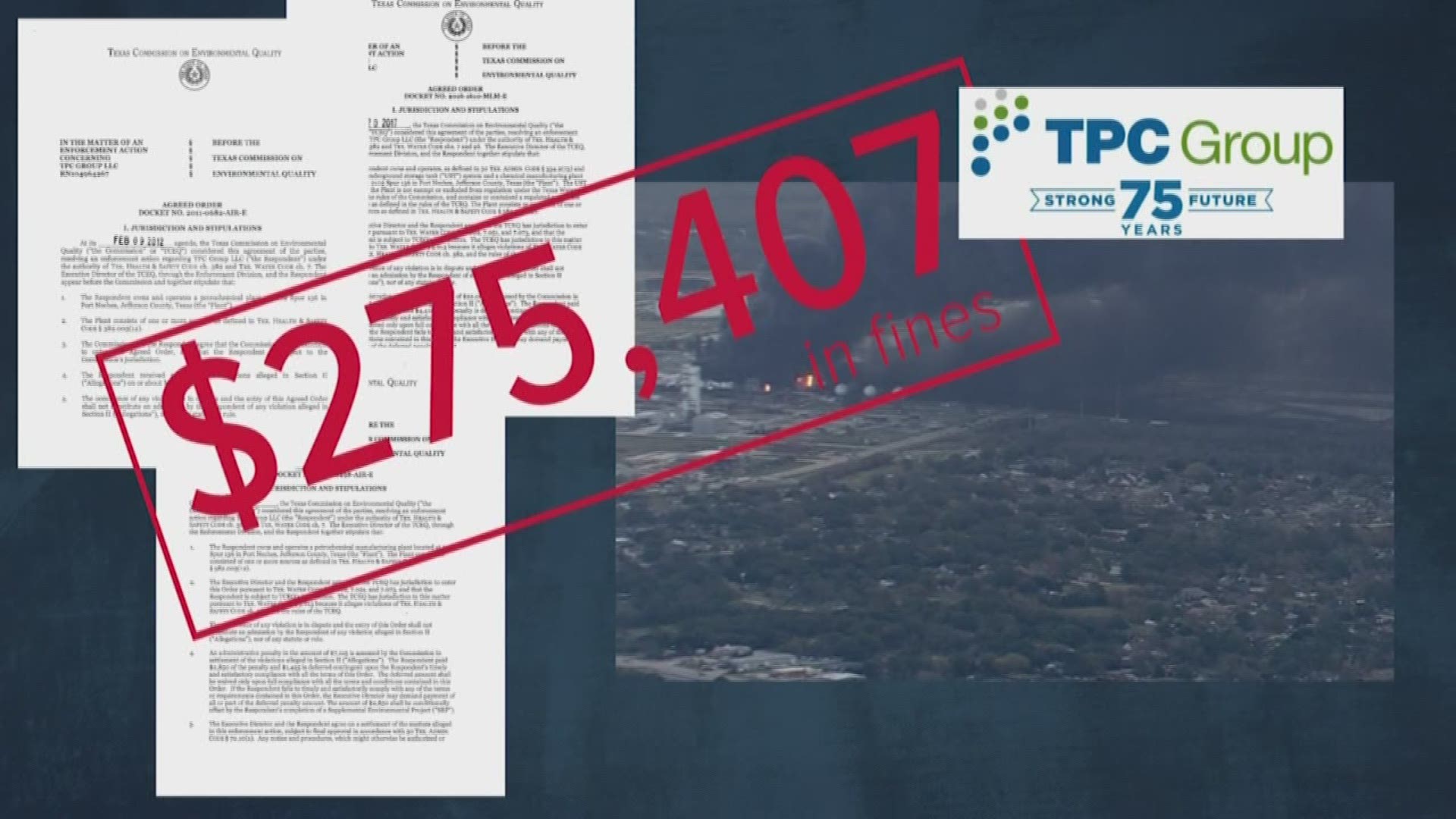 The Port Neches chemical processing plant that exploded into a fireball overnight has a long history of “high priority” environmental violations that could have been avoided with better maintenance, according to a KHOU 11 Investigates analysis of state and federal records.

The violations resulted in more than $275,000 in penalties over the past 10 years against Houston-based TPC Group, the company that owns the Port Neches facility.

The U.S. Environmental Protection Agency lists the facility as having “high-priority violations” and noncompliant with the federal Clean Air Act every quarter since January 2017. Records show most of the violations involved preventable emissions events of butadiene, the chemical company officials said was burning at the plant.

“I have no knowledge of those violations,” said Troy Monk, TPC Group director of health safety and security, at a morning news conference.

Monk told reporters he would look into the history of noncompliance and pledged to address the violations at a later time. Monk said butadiene is a hydrocarbon used in the manufacturing of synthetic rubber.

The Texas Commission on Environmental Quality fined TPC Group more than $105,000 for butadiene-related violations since 2010. In May 2010, the state fined the company $20,206 for three unauthorized emissions events that occurred in the summer of 2009. In one case, state regulators cited corrosion, an issue in several violations, on a butadiene transfer line as the source of the leak. In that case, the TPC Group failed to timely submit a final report to state regulators.

Other enforcement penalties range from $5,775 to more than $72,000. In August 2015, the TCEQ fined the company $45,750 for 12 months of excessive emissions of carbon monoxide, nitrogen oxide and volatile organic compounds.

In 2016, the EPA levied $30,750 in penalties and TCEQ fined the company $7,125 after finding the company released 900 pounds of chlorine gas in October 2015. Two weeks prior to the event, a work request was written identifying corrosion as a potential leak risk. But records stated the line was not shut down or placed out of service in time.

“Respondent failed to maintain a safe facility so as to prevent releases by not accurately tracking preventative maintenance and repairs or routine inspections,” the EPA’s director of compliance assurance and enforcement division wrote in the agency’s final order.

In the largest fine against TPC Group over the past 10 years, the EPA required the company to pay more than $72,000 in July 2017 for repeated violations of federal clean air quality laws. From July 2011 to October 2014, the company did not follow EPA standards for flaring “in a manner consistent with good air control practices for minimizing emissions.”

The EPA also ordered the company to complete a supplemental environmental project and increase monitoring of butadiene through a Fence Line Monitoring Project. The project was estimated to cost $275,000.

Three TPC employees were injured in the explosion on Wednesday. Only one other employee injury at the plant was reported to the Occupational Safety and Health Administration, the agency that oversees workplace safety. In September 2015, an employee fractured his leg.

The company was also fined $11,224 by OSHA in 2016 for a “personnel protection safeguards violation.”

“Within the last year, I have witnessed an unacceptable trend of significant incidents impacting the Gulf Coast region. While not all emergency events may be prevented, it is imperative that industry be accountable and held to the highest standard of compliance to ensure the safety of the state’s citizens and the protection of the environment. At this time, the TCEQ is focused on emergency response efforts, including evaluating real-time air quality data. As this situation transitions back to normal operations and post-event remediation, all agency authority will be assessed with the aim of achieving comprehensive compliance given the presence of the petrochemical industry in Texas.”