On Dec. 8, the National Flood Insurance Program (NFIP) was set to expire. Thursday, the Senate passed a two-week spending bill to avoid a government shutdown, allowing an extension on the NFIP. 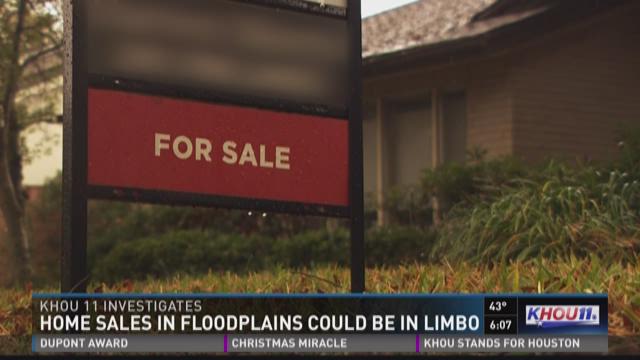 The clock is ticking toward a deadline that would impact thousands looking to buy or sell homes across the Houston area.

On Dec. 8, the National Flood Insurance Program (NFIP) was set to expire. Thursday, the Senate passed a two-week spending bill to avoid a government shutdown, allowing an extension on the NFIP.

In the simplest terms, if the NFIP expires, virtually no homes in any floodplain could be bought or sold, if that deal involves a mortgage company.

That’s because anyone buying a home with a federally-backed loan is required to carry flood insurance if that house sits in a flood plain.

If Congress doesn’t vote to extend the NFIP, no new policies can be written after the date it expires. If that happens, local real estate broker Ed Wolff says the impact could be huge in Houston.

“Houston is a market that must have available flood insurance in order for people to purchase and sell homes,” Wolff said.

KHOU 11 Investigates teamed with SP Group, a Washington D.C. based consulting firm and found nearly 216,000 homes in Texas sit in floodplains. Nearly half of those, or 105,000 homes, are in the Houston area.

If you have flood insurance, you’re still protected, even if Congress can’t come up with a deal to revamp and save the program. The trouble comes if someone is looking to buy a house and needs to get a new flood insurance policy.

Congress failed to reauthorize NFIP in 2010, triggering a four-week lapse in the program. The National Association of Realtors said that temporary expiration disrupted more than 1,300 home sales every day.

Wolff’s advice to those closing on a home in the next month is to call and lock in flood insurance now – that way you’re protected in case Congress allows the program to expire and it takes weeks or longer to come up with reforms.

NFIP was originally set to expire in September. Congress passed a short-term extension to the program. However, lawmakers have not been able to agree on a number of fixes for the program which underwrites almost all U.S. flood policies.

NFIP was established in 1968 after private insurers withdrew from the flood insurance market due to large, unpredictable losses. Controversy surrounding the program's extension increased after Harvey's billion dollar damage.

“It is imperative that Texans who have suffered from the impacts of Hurricane Harvey have the support they need to rebuild. Sen. Cruz is working with his colleagues to ensure not only that the NFIP is renewed, but also that the program is put on a sustainable path that protects ratepayers as well as taxpayer.”