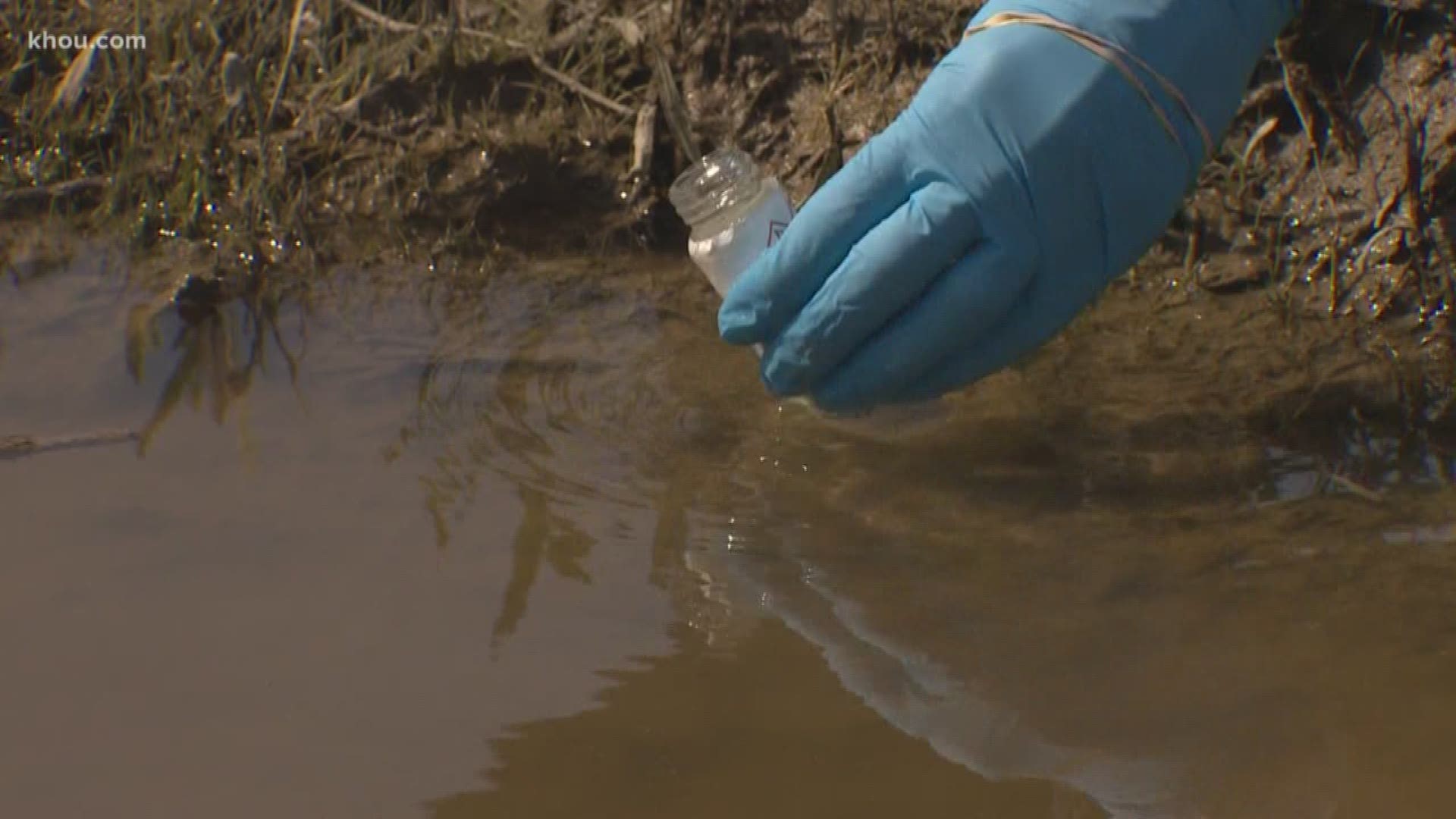 HOUSTON — KHOU 11 Investigates had water samples from the Houston Ship Channel tested by professionals to find out whether public parks and local beaches were contaminated after the ITC fire.

When several schools closed after the ITC chemical fire, locals flocked to Sylvan Beach, but not everyone was quick to get in the water.

“We are staying away from it. We don't really know what's in it,” Kindel Stubblefield said.

KHOU 11 Investigates wanted to know, too. We mapped out eight locations, including public beaches, parks and fishing holes. We collected water around the Ship Channel.

RELATED: More progress made in cleaning out Houston Ship Channel after ITC fire

We started downstream at Sylvan Beach, Morgan's Point and Baytown. We then moved closer to ITC, just across the channel at the Lynchburg Ferry, River Terrace Park and Vince Bayou. We even went farther upstream to Buffalo Bayou.

We turned over our samples to chemists at Envirodyne Laboratories, Inc. Lab manager Laura Bonjonia reviewed the data.

“We were looking for a group of compounds called Volatile Organic Compounds, which includes benzene,” Bonjonia said.

Elevated benzene levels detected in the air led to a shelter in place in Deer Park and Galena Park last week. Benzyne is an additive commonly used for petroleum products in the oil and gas industry. It can cause dizziness, respiratory problems and cancer in the long term.

Envirodyne analyzed our samples for 30 to 40 organic compounds including benzene substitutes, toluene, xylene and ethylbenzene.

“The analysis that we conducted has identified that there is no benzene in the water, nor any other volatile organic compounds,” Bonjonia said.

All of the scans came back below the levels set by the EPA and TCEQ. However, chemists did find a small trace of chloroform in the water from River Terrace Park. Bonjonia said that is quite common and is not necessarily a result of the fire at ITC.

We also had the samples tested for Total Petroleum Hydrocarbons (TPH), any mixture of hydrocarbons that are found in crude oil. Chemists found high levels of lubrication oil in the water we collected near the Lynchburg Ferry, which could be harmful to fish. However, the source of the oil is unknown.

We collected the samples before the dike wall collapsed on March 22. Bonjonia said if we collected water samples in those same locations today, the results would likely be the same.

“Because of the nature of volatile organic compounds, the concentration should decrease once the initial spill is stopped,” Bonjonia said.

Eight parks in the area have been closed since then as a precaution. Bonjonia said, while the samples are not cause for concern it is probably best that the public stay away until the coast is clear.

To view the complete report by Envirodyne Labs, click here and here.