A girl found murdered near Houston identified 30 years later, but her killer was never caught. Now, cold case investigators at the Harris County Sheriff’s Office are on the case. 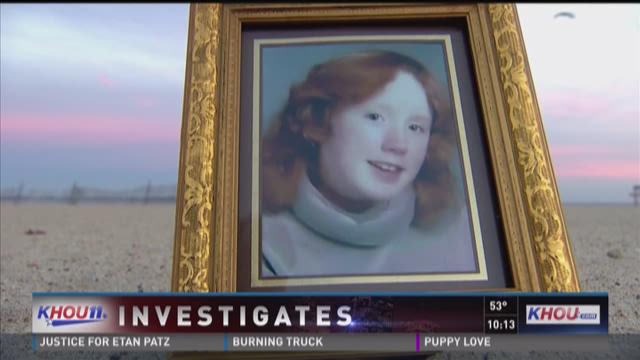 HOUSTON- It's a story that stunned the nation.

A girl found murdered near Houston identified 30 years later, but her killer was never caught. Now, cold case investigators at the Harris County Sheriff’s Office are on the case.

No matter how much time passes, Sean Garvey still thinks about his big sister, Michelle. She disappeared two days before her 15th birthday.

"Not a day went by that I never thought about her," said Garvey.

A month later, investigators found her body near Houston, strangled to death in 1982.

Back home in Connecticut, her family told us for 30 years, they had no idea she died.

"We were always looking for her online and everything," said Pat Garvey, her mother.

However, then came a break.

"We had some luck in other cases," said Detective Tanya Compagnone, Connecticut State Police.

In 2013, she sent in DNA from the Garvey family and it matched Michelle's body that had just been exhumed in Houston.

"If we can find her... then I think there's definitely hope for finding the killer," said Compagnone.

Here in Texas, cold case investigators at the Harris County Sheriff's Office are working to put the pieces together.

"To try to find why she was in Texas, how she got here, who she may have traveled with," said Sgt. Robert Minchew, H.C.S.O. Cold Case Unit.

And how she ended up near Baytown off I-10 and Decker Drive in an area called "Four corners."

Minchew says there were signs of sexual assault. "That did come out later at the autopsy, she was clothed though, she had pants on, her shirt was unbuttoned all the way, no bra, no shoes," he said.

But why would someone want her dead and how did she get to Texas?

Michelle left her home in New London in the middle of the night, sneaking out of a window. Her family believes she may have met someone in town and got in their car not realizing where she'd end up.

"I think that was a lot of what was going on in her head that we divorced," said Pat.

Michelle ran away once before from the apartments where her family lived, but turned up at an aunt's house. Over the years, her family turned to psychics and even researched serial killers.

"I was looking for everything to try and ID her in the time frame... and that's how I came across The Killing Fields," said Sean.

The Texas Killing Fields murders happened around the same time. However, investigators have no evidence Michelle's murder is related to the area south of Houston where the bodies of so many young girls turned up.

In the middle of loss, Michelle's parents found a new connection.

"We got married again... just this January," said Pat.

Giving them hope, that if they can find their daughter after 30 years, finding the killer is possible.

Cold case investigators are making progress. They submitted old evidence for new testing. Now, they believe they have the killer's DNA.

So far, there's no match in the system. Meaning, the killer has never been to prison or he was behind bars before they started collecting DNA.