Amid rampant fraud, Illinois asks victims to pay back unemployment benefits they never got

Illinois' systems leaked personal data throughout the year to identity thieves. Letters from the state asked victims to pay back what the scammers stole 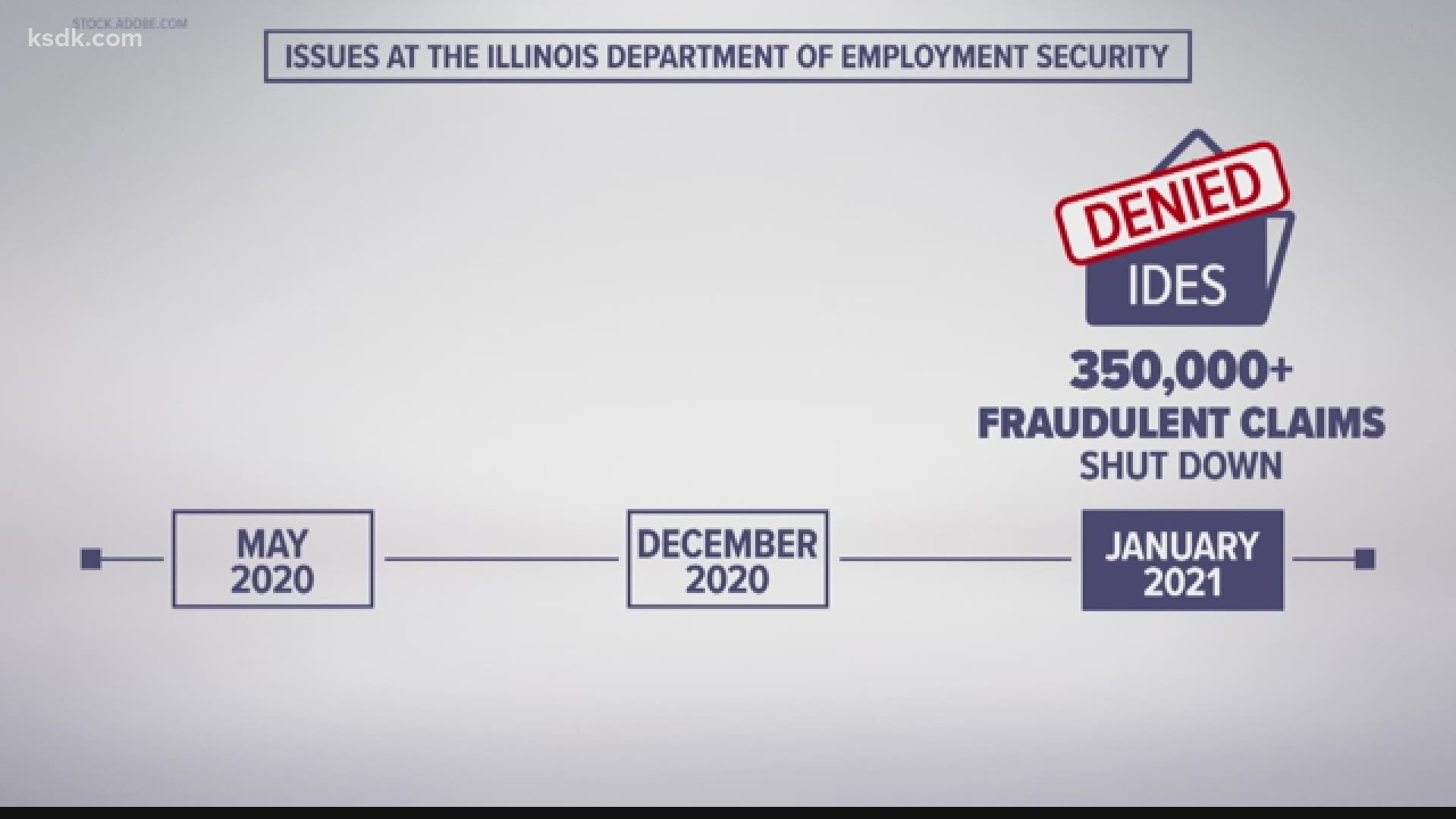 JERSEYVILLE, Ill. — Unemployment systems across the country are already overburdened with the impact of layoffs and closures during the pandemic. Now states are reckoning with an extra cost: billions of dollars they paid to fraudulent claims filed using stolen identities.

The latest finding from the Department of Labor Office of the Inspector General estimates that around 10%, or $36 billion, of federal unemployment funds from the CARES Act could go to scammers or filers who didn’t qualify.

In Illinois, a Jerseyville family felt the impact of that fraud more than once. First, in November, when Pam Sanford found a bill in the mail.

“This letter just shows up,” she said. “It stated that my husband had an unemployment claim filed.”

The letter from the Illinois Division of Employment Security demanded repayment for nearly $1,000 in unemployment benefits that her husband never filed for.

“So someone got this money and now the state of Illinois has requested twice now that we pay it back,” said Sanford.

The Sanfords reported the fraud to the IDES. When they didn’t hear back, they learned from Facebook that other families were being asked to repay Pandemic Unemployment Assistance they never received or asked for. Illinois state representative Mike Marron (R-104) heard from many other residents who got that same letter.

“It really, really disturbed me. It was mid-December, when a lot of my constituents, you know, people that aren't rich by any means, started getting these PUA repayment letters,” said Marron.

“Here we are, you know, we're 11 months into this thing now and the system still doesn't work,” he added.

Some of those systemic problems started within the IDES, according to releases from the agency. In May, the system publicly exposed the personal information of 32,483 people who applied for unemployment benefits. That included social security numbers.

Then, in December, the IDES announced scammers used another loophole in its system to steal even more money meant to help the unemployed. Fraudulent filers who listed an address of their own as the contact for a former employer got a fraud prevention letter meant for the employer.

A news release describing the scheme states, “As a longstanding practice, IDES notices to employers contain [personally identifying information] to assist the employer in identifying which of their employees has filed for unemployment insurance benefits or which of their employees has had their identity stolen and had a fraudulent unemployment insurance claim filed in their name. IDES uncovered that employer notices have been mailed to addresses used by fraudsters when filing claims, reaching unsuspecting businesses and households whose addresses were used by fraudsters.”

As of January, the division estimates they’ve shut down more than 350,000 unemployment claims filed with stolen identities.

Blake Hall, the chief executive officer of identity security company Id.Me, is working with 15 states, not including Illinois or Missouri, to verify the identities of people filing for unemployment. He told the I-Team that the IDES’ troubles made them an ideal target for scammers.

“I think that in the rush to help, we just lacked a little bit of that foresight to say this is going to be an enormous target for criminals. You can literally take one identity and turn it into about $20,000,” said Hall.

“We're playing against the Russians and the Nigerians and the Chinese and they are pros,” he added. “These attackers are open sourcing the attack. They literally share information about which state is the worst at preventing fraud. How quickly does the state pay out? How much do they pay out?”

Marron told the I-Team that the problem shows how much Illinois’ system for the unemployed needs to improve.

“I think we are doing worse,” he said. “Yeah, we are among the worst in every state category, unfortunately.”

The FBI and Illinois Attorney General Kwame Raoul created a task force to combat unemployment fraud in January. Even Raoul was a victim.

“Wow, if they are targeting individuals who are heads of law enforcement agencies, they'll target anybody," said Raoul.

The IDES also announced in December that it would no longer include employees’ personal information on the employer notification letters that fraudsters were getting through illicit means.

With tax season approaching, more people will be learning whether someone received benefits using their identities.

“I had constituents that have gotten 1099s for benefits that they never applied for, and they didn't receive, and so now they're trying to get through and talk to the department to make sure that they're not liable,” said Marron.

While the Sanfords were getting notices from the IDES to pay back the benefits sent to scammers, Pam’s husband was laid off for a week. They found themselves needing the unemployment benefits someone had already stolen from them. It took weeks, but the IDES paid their claim and is no longer sending bills for the fraud.

“There was a lot of fear there. Luckily, we were not one of the people out there that depended on this to put food on the table,” said Sanford.

The other step, a credit report, will identify any other claims or lines of credit obtained using personal information from any source. The Federal Trade Commission website has directions on how to request a credit report for free.

The IDES website advises people who reported fraud that they might get a letter sent by accident asking them to pay the benefits back. Victims of fraud who have already reported it to the state can ignore the overpayment notice.

To report an incorrect Form 1099-G in Missouri, the state Department of Labor recommends a call to the Missouri Division of Employment Security at 800-320-2519.