Even with the increase in demand, volunteers at the food banks are doing everything they can to make sure no one goes hungry. 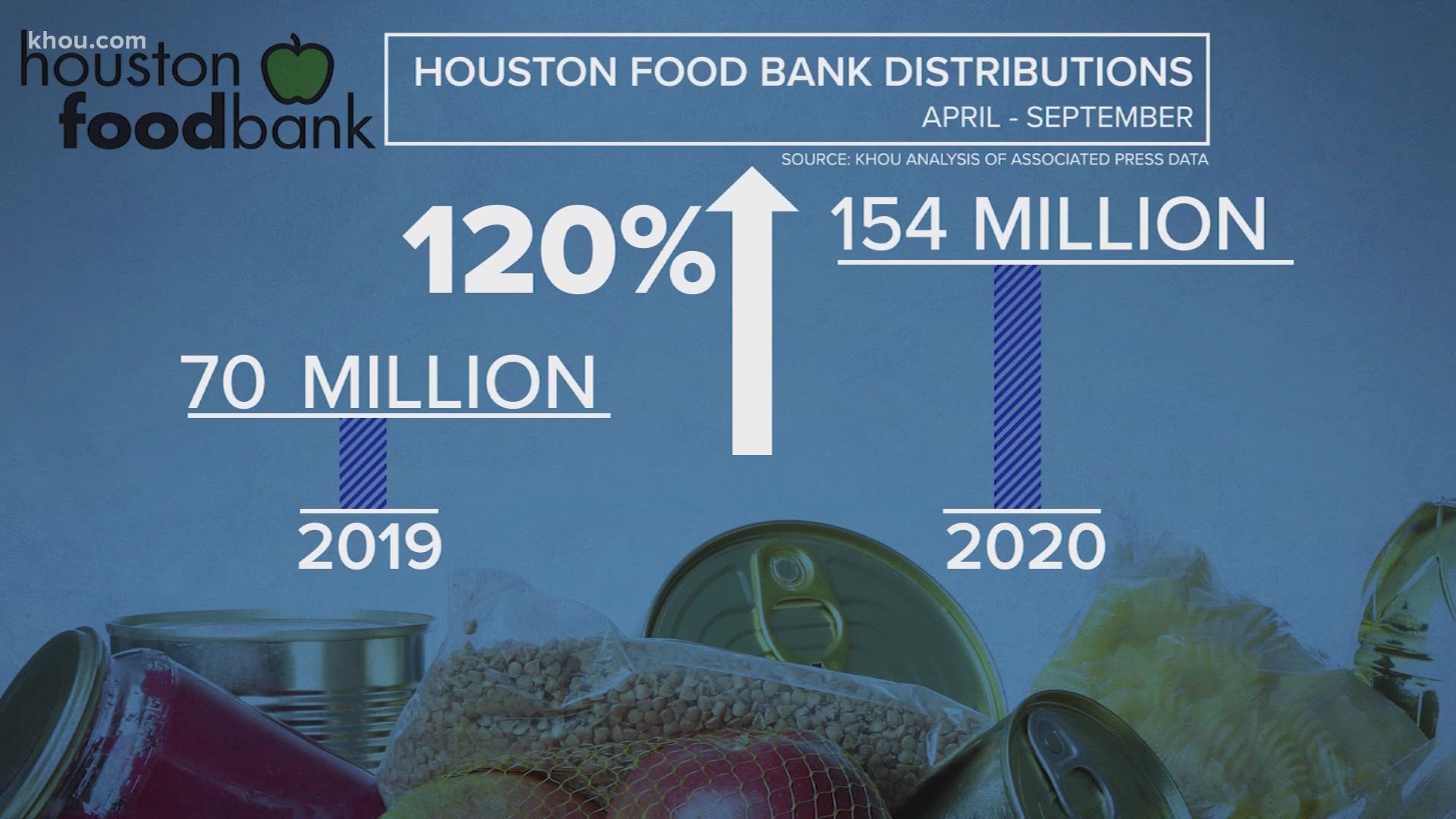 HOUSTON — Demand for food assistance in Houston has more than doubled during the COVID-19 pandemic, according to a KHOU analysis of data obtained by the Associated Press.

You can see the surge at places like West Houston Assistance Ministries, one of the dozens of Houston Food Bank partners, where cars line up three times a week and volunteers spend about three hours straight stocking trunks with fresh meat, produce and other essentials.

Many of those in line, like Quinn Smoot, have not had to ask for help before.

Prior to COVID-19, Smoot was one to donate items. But after her husband was laid off, bills began to pile up and the charitable groceries were the only way to make it through the week. The couple has a 9-year-old son with autism.

“I’m on the other side now,” she said. “Not expected, but neither was the pandemic.”

Wesley White is another first-time Houston Food Bank client. He’s been out of work since April.

“It’s just the bills, the bills don’t know about coronavirus,” he said.

The struggle to eat for Houstonians is reflected in huge distribution numbers at the Houston Food Bank, which has given 154 million pounds from April to September, a 120% increase compared to the same time last year. The spike is by far the largest among Feeding America food bank members in Texas. It’s also the 13th largest increase in food distribution in the nation.

President and CEO Brian Greene said the Houston Food Bank’s massive eastside warehouse was one of the reasons it was able to keep up with the demand.

“Our facility was designed to handle up to 1,000 volunteers at once, so even after we had to make dramatic cutbacks on how many people could volunteer at a time, down to 150, that’s still way more than any other food bank could do,” Greene said. “So it enabled us to continue to say yes at levels that other food banks could not.”

Green said peak levels topped 1 million pounds of food distributed daily. It's a lifeline for so many struggling to make it.

“It’s Christmas ... to know that I can come here and I don’t have to worry, they’re not going to run out (of food),” Smoot said.

But there is worry as three government funding programs that have helped food banks respond to the high demand are set to end soon. If funding is not renewed soon, some Texas food banks project possible food shortages come the new year.

Some relief may come soon, however. The Houston City Council is set to vote Wednesday on earmarking more than $2 million in CARES act money to help the Houston Food Bank.