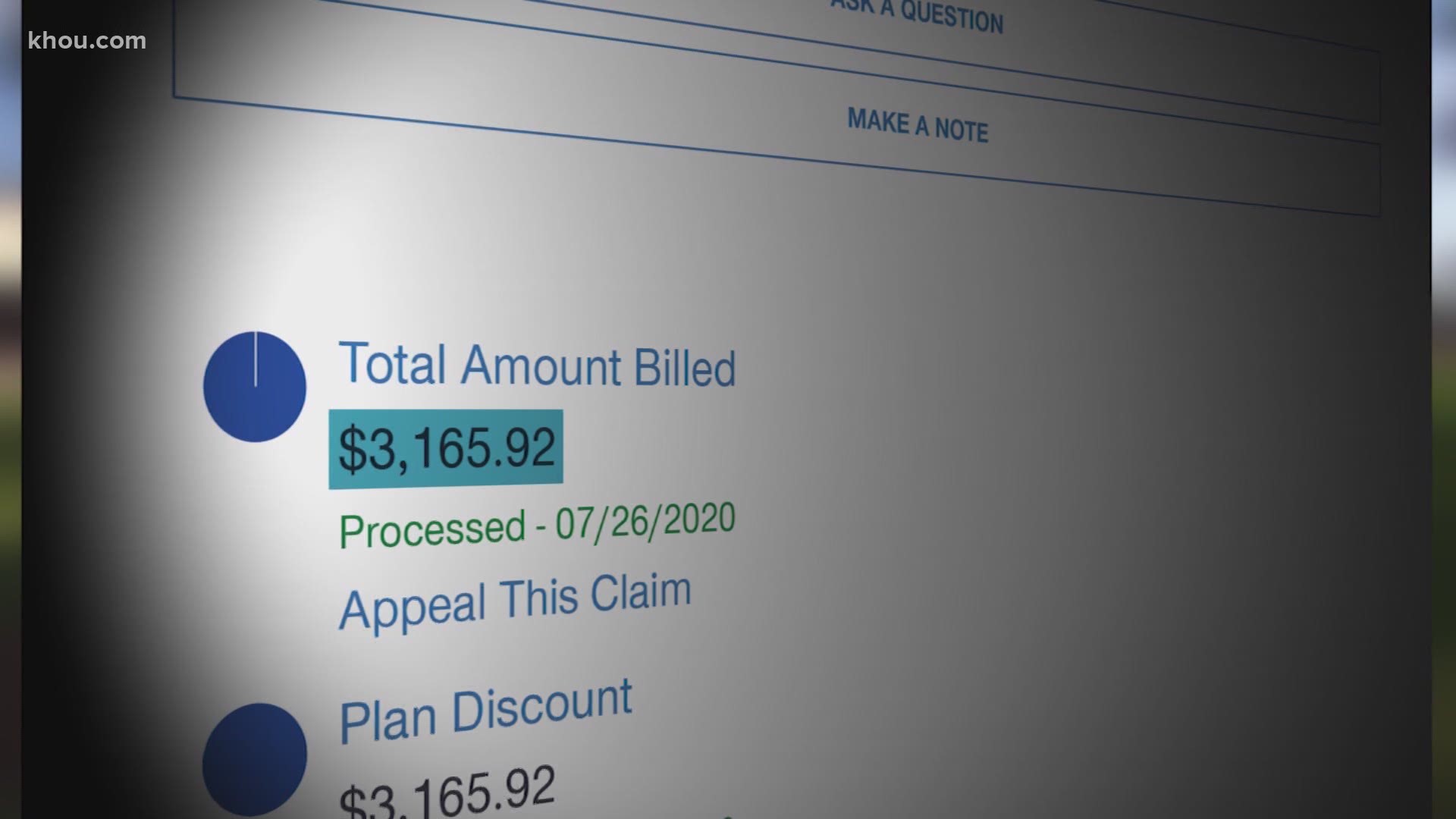 HOUSTON — A Houston hospital is voiding charges related to COVID-19 tests for several patients who did not consent to additional lab work ordered by the healthcare provider.

KHOU 11 Investigates first exposed the issue earlier this month when a Spring woman shared a $3,165 insurance bill for a three-minute nose swab at a drive-through testing site operated by United Memorial Medical Center.

“It feels like, at a minimum, price gouging,” said Laurie Delgatto-Whitten. "At a maximum, this is incredibly deceitful."

At the time, the chief medical officer for United Memorial Medical Center had no explanation for the charges and pledged to investigate.

“I am going to get to the bottom of this no matter what,” Dr. Joseph Varon said.

An attorney representing the hospital has since provided documentation showing that Delgatto-Whitten’s insurance company, United Healthcare, incorrectly listed two medical office visits on her explanation of benefits. A spokesperson for United Healthcare confirmed it will revise the document.

But there is another issue with her case—the hospital ordered additional lab tests, a respiratory pathogen panel (RPP), without her knowledge or permission. United Memorial Medical Center billed $2,715 for the extra lab work.

“It was brought to UMMC’s attention that a handful of patients from the Kuykendahl Road testing site in Spring were tested for the RPP panel without their prior written consent,” attorney Justo Mendez said in a written statement.  “UMMC took those patient complaints very seriously. After conducting a throughout audit, UMMC contacted all of these patients, voided any insurance claims for services for which UMMC had no documented consent, and did not charge for the RPP tests."

Mendez said the RPP panel allows physicians to reach a more precise diagnosis for patients with symptoms similar to COVID-19, but who turn out to have different types of infections, such as influenza or bacteria pneumonia. UMMC said it was supposed to order the additional lab work only for those patients who consent and who meet medical criteria.

But another patient who went to the UMMC drive-through testing site said she and a co-worker had no symptoms whatsoever.

Janice Gunn said she received the same exact $3,165 bill to her insurance company, including the same $2,715 charge for the respiratory pathogen panel.

“We only asked to be tested for COVID, and I couldn’t believe that they charged us (more than) $3,000,” Gunn said.

The Texas Association of Health Plans, which represents most health insurers doing business in the state, said it has seen a trend of adding on charges during the pandemic.

“We are seeing providers that are just taking inappropriate advantage of this entire situation,” said TAHP CEO Jamie Dudensing. “It’s really disturbing because it puts the whole system at risk, it drives up costs."

Since KHOU 11 Investigates began asking questions, United Memorial Medical Center launched an audit of its records. The hospital system said it determined that the “handful of errors” happened only at the Spring location. UMMC said it had tested 159,115 patients for COVID-19, and less than five percent had the additional respiratory pathogen panel of tests performed.

“Now more than ever, as we fight to overcome this pandemic, UMMD is committed to redouble its efforts to protect the health of the greater Houston area residents,” attorney Mendez said.